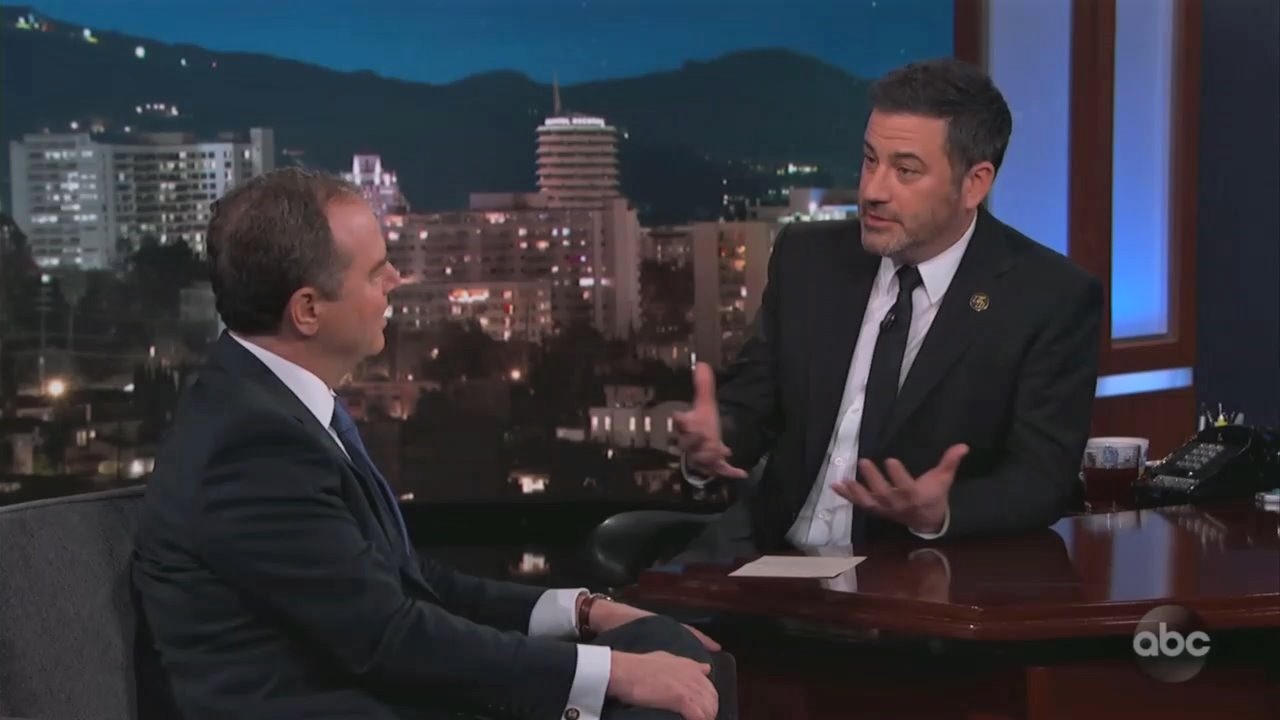 Adam Schiff is the congressman of Hollywood, and in Hollywood he can do no wrong as he wages war on President Trump. For proof, look no further than the slobbering interview granted by ABC late-night host Jimmy Kimmel on February 24. Kimmel made the point several times that Schiff was “our local congressman,” and had an office “right down the street” on Hollywood Boulevard.

After some pleasantries about how Schiff gets stopped on the streets by (mostly) admiring citizens, the talk turned to President Trump. Kimmel ran a clip of Trump insisting Schiff should be investigated for leaking the details of a classified briefing about Russia to the newspapers. Kimmel, who's no lawyer, said nothing about it being illegal to share classified information, and he certainly didn’t ask Schiff to deny he had leaked classified information.

The newspapers disdained Trump’s allegation as “without evidence,” which is very convenient when you keep your sources anonymous.

Kimmel acted amazed. “Would this be (by) your fellow congressmen?” Schiff said “No, it’s much more malicious than that. He wants the Justice Department – his hand-picked hack at the Attorney General’s office, Bill Barr, to investigate his political enemies.” Kimmel replied “Shouldn’t everyone, regardless of their party, be very troubled by this?” Schiff said “absolutely.”

So when Sen. Martha McSally called a CNN reporter a “hack,” the entire media elite is outraged, but when Schiff calls the Attorney General a “hack,” everyone just nods and giggles along. Kimmel, who defines the word “hack,” insists that Schiff’s very partisan behavior should be defended “regardless of party.”

Kimmel wanted the Republicans on the House Intelligence Committee to be outraged. They were – at the leaks from people still trying to claim some grand Russian collusion scheme. Schiff raised the name of the ranking member, Devin Nunes, and Kimmel pounced.

“Devin Nunes, who for whatever reason just kind of came out of nowhere, and really has devoted his life to protecting Donald Trump, for reasons that are unknown to me.” As if Nunes hadn’t been in Congress since 2003 – in other words, as long as “Jimmy Kimmel Live!”

Kimmel added “I don't know if he's dumb, if he's evil, if he's some combination of the two. I'm pretty sure he's dumb. I won't speak to evil. But what's going on there?”

This is the classic divide for liberals when it comes to conservatives: they’re either dumb (liberal take on Dan Quayle) or evil (liberal take on Newt Gingrich). Jimmy Kimmel never graduated from college, but he can play to the gallery and pretend the Republicans are idiots or villains. Jimmy Kimmel washed out of two colleges, but he’s a comedian, so he’s the smartest guy in the room.

This is why Schiff can do no wrong. Which congressman has been vindicated by the evidence on the charge of Russian collusion, Schiff or Nunes? It doesn’t matter what the Mueller Report said – although it showed Schiff was wrong when he said he had definitive evidence of collusion.

It certainly doesn’t matter what the Horowitz Report said, from the Inspector General’s office at the Justice Department. Devin Nunes composed a memo on how Obama’s Justice Department hacks abused the Foreign Intelligence Surveillance Court to spy on Trump aides. Adam Schiff offered a memo in rebuttal. On each point, Horowitz found Nunes was right, and Schiff was wrong

Jimmy Kimmel is running a comedy show, not a court proceeding. He just feels that in his heart, he knows Schiff is right. He can just gush to Schiff “I am grateful for what you do,” because they both desperately want to end Trump’s presidency.