On Thursday, Mike Bloomberg's campaign tweeted out a humorous video trying to make more out of the two seconds of silence when he asked his fellow Democrat candidates ever started a business. (They haven't.) He showed brief clips of the other candidates with blank looks -- from other moments in the debate -- and included the sound of crickets. The "fact checkers" went crazy. Washington Post Fact Checker Glenn Kessler gave it Four Pinocchios.

Washington Examiner media reporter Becket Adams ran a whole list of quotes from panicked journalists and pointed out "As you can see, though, it has all the obvious tells of a joke, including goofy close-ups and cricket sound effects. The people treating the video as a serious attempt by a campaign to deceive the public are maybe taking themselves a bit too seriously."

A fact checker can object on behalf of people who might actually think there was 22 seconds of silence instead of two. But the crickets and the goofy faces should be obvious clues. It's not worthy of wild fire-alarm sirens or Four-Pinocchio denunciations. Many think the outrage is a little insulting. Noah Rothman tweeted "All of this seems predicated on the assumption that we're idiots."

We should be happy that the fact-checkers are throwing flags at a Democrat, but it's a billionaire Democrat...and this could seem calculated as a way to make sure that Bloomberg's widely panned debate still looks like a disaster. What drew all the upset was that the video quickly drew four million views. So the volume of it somehow made it more un-factual. 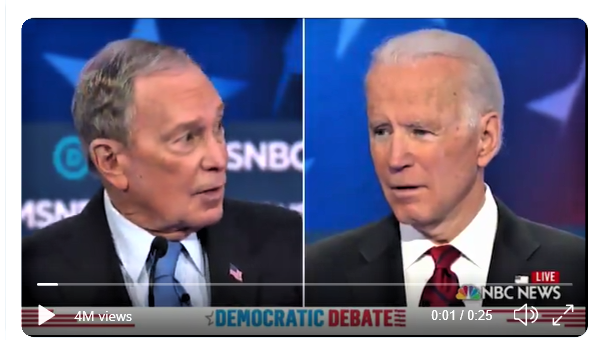 Political ads can be fun and entertaining, but they shouldn’t be misleading. Anyone who had not seen the debate could have been easily misled into thinking the other candidates stood there in stunned silence for nearly half a minute.

We’re taking a tough line on manipulated campaign videos before viewers are flooded with so many fakes that they have trouble knowing what is true. The Bloomberg campaign should label this as a parody or else take the video down.

Daniel Funke of PolitiFact gave it a "Mostly False."

The video was selectively edited to splice together unrelated moments of expressive faces from his rivals. In fact, there was a two-second pause after Bloomberg brought up his business experience.

Bloomberg’s video contains an element of truth but ignores critical facts that would give a different impression. We rate it Mostly False.

We rated this Washington Post and PolitiFact argument as "Half Baked," for thinking voters are less than half-aware of satire. For more, see our Fact-Checking the Fact Checkers page.