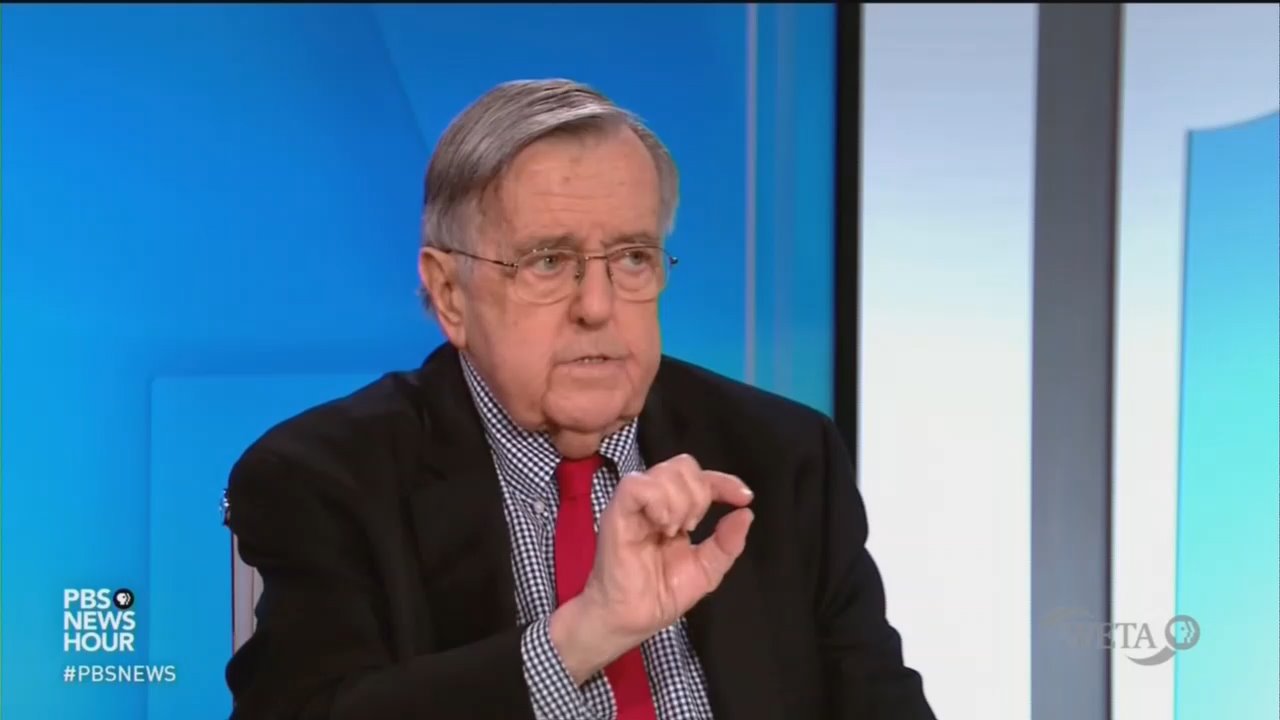 On Friday's PBS NewsHour, liberal commentator Mark Shields made a very odd historical comparison -- the 2020 Democrat presidential contenders were like American revolutionaries of 1776, fighting a president who is somehow like King George III, the tyrannical English monarch.

But first, both Shields and David Brooks agreed that Bernie Sanders -- the antithesis of 1776 libertarian ideas -- was the clear front-runner among Democrats, and Michael Bloomberg had a terrible debate. "He couldn't go toe to toe with Elizabeth Warren. I mean, she absolutely dominated him. She dominated the stage," proclaimed Shields. "I'm not sure she won the crowd, but she certainly was the dominant figure in that debate."

Sanders "really escaped almost unscathed. And it was just — it was truly amazing. I think it was a damaging experience for Bloomberg....And whether it was peevishness, arrogance, dismissiveness, whatever, condescension, he just refused to come up with an answer that was plausible and convincing and believable."

Then, after several minutes of discussing President Trump's pardons and sentence commutations, Shields came back around to his fractured Founders analogy. He's worried the Democrats won't get it together and win:

MARK SHIELDS: There's just one thing about the Democrats that I just want to — that kind of fits in here.And that is, the Democrats, I think, after that debate, are in danger of fragmenting and fracturing themselves. And I think there's a page in American history, the Revolutionary War. The revolutionists sought the active alliance with Charles XVI [oopsy] of -- the king of France, Louis XVI and Charles III in Spain -- monarchies, to help them....They had a single objective, and that was to defeat the king of England, to get independence.

The Democrats better say — they better come together in a hell of a hurry, because their sole purpose in 2020 is to defeat the monarch, to defeat Donald Trump. And I just — I think the danger of fracturing is severe.

Liberal journalists often fear that one consequence of nominating Bernie Sanders is that Trump will compare his socialism to Venezuela, which is wracked by hyperinflation, poverty, crime, and malnutrition. On Friday, the PBS NewsHour aired another segment from that very troubled country by correspondent Marcia Biggs...and in that ten-minute story, the word "socialism" never came up, and neither did the socialist in charge of the country, Nicolas Maduro. Woodruff could only say "The once-wealthy South American country is now in economic freefall."