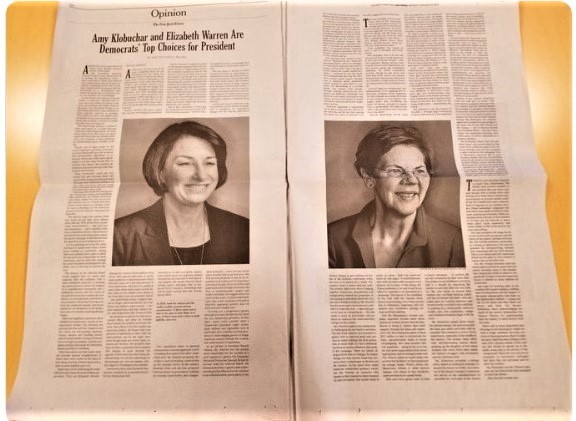 The New York Times made an enormous deal out of its presidential endorsement in 2020, recording all their interviews with the candidates, with transcripts, and ending in a one-hour episode of their show The Weekly on the FX cable network. Then they announced a weird, gimmicky result: they would endorse two candidates – Amy Klobuchar and Elizabeth Warren. The editorial took over two entire pages of the Monday paper.

What made it funnier was the notion that Klobuchar represents the “realist” wing of the Democrats, and Warren the “radical” wing...when their American Conservative Union voting scores are nearly identical. Granted, Warren’s proposals in this campaign are more radical.

This was the pull quote:

They want radical change... and stability. This sounds like an accurate summation of how focus groups sound, but it’s incoherent coming from the nation’s most self-impressed newspaper. They were not incoherent on Trump, beginning this editorial with the usual ration of rage:

The incumbent president, Donald Trump, is clear about where he is guiding the Republican Party — white nativism at home and America First unilateralism abroad, brazen corruption, escalating culture wars, a judiciary stacked with ideologues and the veneration of a mythological past where the hierarchy in American society was defined and unchallenged.

Sure. As if the New York Times isn't firing missiles in "escalating culture wars" and doesn't favor "a judiciary stacked with ideologues." Look again at who they just endorsed.

“Senator Warren is a gifted storyteller. She speaks elegantly of how the economic system is rigged against all but the wealthiest Americans...Her campaign’s plans, in general, demonstrate a serious approach to policymaking that some of the other candidates lack."

As for Klobuchar, "the senator from Minnesota is the very definition of Midwestern charisma, grit, and sticktoitiveness. ..Her vision goes beyond the incremental. Given the polarization in Washington and beyond, the best chance to enact many progressive plans could be under a Klobuchar administration." This is a little funny, since they discussed Klobuchar lacking charisma right after her interview (considering her status in the polls).

Outside the bubble, this looks like a leftist Manhattan caucus, not a newspaper meeting. You can really sense how they like the cut of Warren's jib in this part of their interview and the aftermath:

Michelle Cottle -- who could play Hillary Clinton in the movies -- lectured Warren about how she couldn't get "comprehensive immigration reform" through budget reconciliation, and Warren slapped back about how you have to fight Mitch McConnell.

Jesse Wegman concluded "I like the fighting spirit, and I like the sense that 'I'm gonna shoot for the moon, I know I won't hit it, but you gotta start there.'" Brent Staples added "Rhetorically, her chops have improved...she got the chops, what can I say?"