The "fact-checking" site Snopes.com had one of its regular freak-outs over stupid Americans mistaking satirical websites for actual news, especially the right-leaning Babylon Bee. They actually contacted the White House to express concern that President Trump's Twitter account was spreading fake news (instead of jokes).

It all began when Jenna Ellis, senior White House legal counsel, tweeted out a Babylon Bee story with the comment, "The Bee mocking the Dems: 'We have found Trump guilty of absolutely nothing, but we already started this whole process and it would look bad to back out now, so here we are.'" 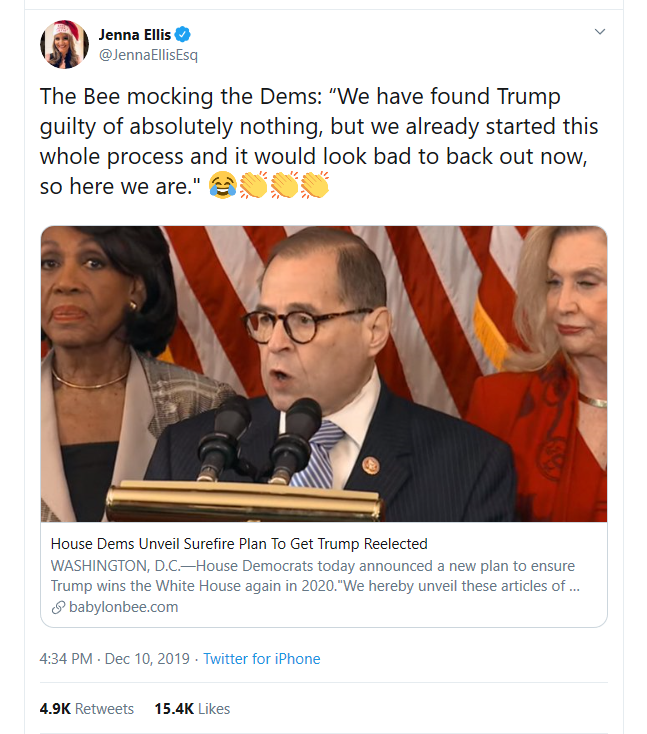 Dan Evon of Snopes sent his concerns to the White House in an email, which read in part:

"President Trump recently retweeted a post from @JennaEllisEsq containing a fake quote from an entertainment article.

Was President Trump aware that this quote was fake when he sent it? If so, why wasn't it accompanied by a message labeling the quote as fiction?"

"We hereby unveil these articles of impeachment, which clearly lay out the undeniable fact that we will not win the White House back next year. We have found Trump guilty of absolutely nothing, but we already started this whole process and it would look bad to back out now, so here we are. I declare here and now that Trump will be in the White House for at least another four years."

Ellis responded: "This is yet another idiotic instance of 'fact-checking' the President for his excellent sense of humor. The fake news media refuses to show the wonderfully kind, fun, and generous side of our President. Instead, they pompously pretend they have to take every tweet or joke at a rally seriously."

But sadly, there are times that politicians are dumb enough to take a satire site seriously, and Snopes was all over it. On December 9, Democratic presidential candidate and New Age guru Marianne Williamson somehow thought a website called MoronMajority.com was a serious broker of political news. They posted an article "reporting" that President Trump had posthumously pardoned notorious killer-cult leader Charles Manson, who died in prison in 2017. 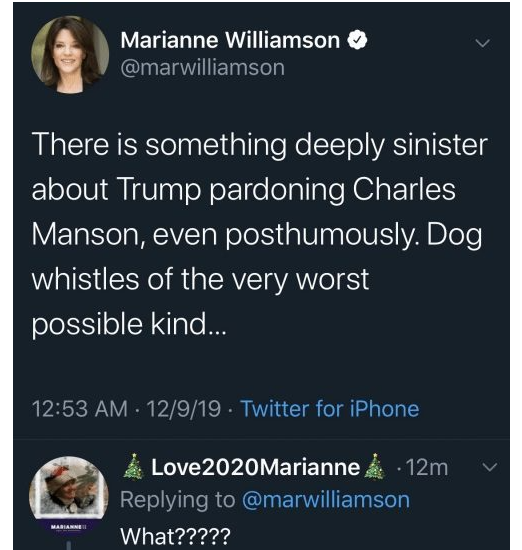 It's amazing large numbers of Democrats gave donations to this guru's campaign.