Krugman: Either Trump Goes to Jail, or 'Thousands of Journalists' in 'Prison Camps'

Shelby Talcott at the Daily Caller reports New York Times columnist and Nobel Prize winner Paul Krugman was making wild and silly prdictions again, this time about the Trump impeachment attempt: "Starting to look like two possible outcomes: Trump and a number of others end up in jail, or thousands of journalists end up in prison camps." 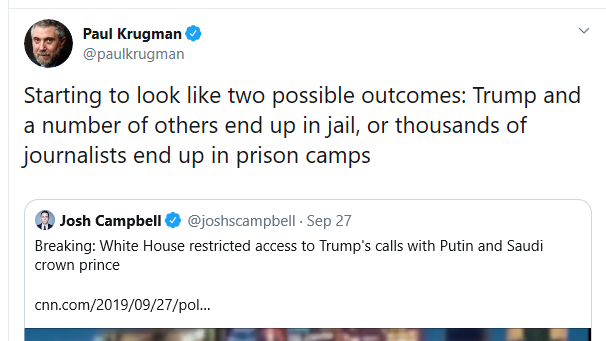 This is the kind of crud that leftists throw non-stop, even now, when there isn't a single example of a journalist in jail, despite their wild predictions before the inauguration. All they can point to is temporary press-pass trolling of Jim Acosta and the guy from Playboy. Even Brian Stelter admitted nothing has happened to prove predictions that Trump would imprison reporters or crush the freedom to report.

Krugman wrote an opinion piece Thursday titled “Impeaching Trump Is Good for the Economy.” He suggested impeachment “will slow down the administration’s war on competence” and " have a chilling effect on the Trumpian project of government degradation." He added "Compared with the Trump era, the Nixon administration was a paragon of good government."

It should be noted this is the same Krugman who predicted after Trump was elected "If the question is when markets will recover, a first-pass answer is never." Under Trump, the Dow Jones average is up 35.5 percent.

He also predicted "we are very probably looking at a global recession, with no end in sight." You wouldn't want him to be your financial adviser.

This kind of wild swinging is pretty typical for Krugman. On September 26, he suggested much of Wall Street is guilty of treason, since they signaled they won't back Elizabeth Warren, and might just vote Trump: "This sort of confirms Warren's whole worldview, doesn't? Big Finance, given the choice between treason and a wealth tax, chooses treason."

He further fussed that not backing a wealth tax (or Warren) is "betraying democracy."