Our friend Mark Hemingway at Real Clear Investigations tweeted about a disturbing article at VICE.com half-lionizing Aileen Wuornos, the hooker-turned-serial killer. The title was "How Serial Killer Aileen Wuornos Became a Cult Hero: To her fans, Wuornos's story offers a powerful example of a survivor who defies the respectability politics of victimhood."

VICE can be "fair and balanced" about a serial-killer fan club -- apparently that's at least half-good, because it's about female empowerment. But the article really went off the rails when writer Sofia Barrett-Ibarria suggested Supreme Court Justice Brett Kavanaugh should meet a violent end like the prey of Wuornos. At first, it read: 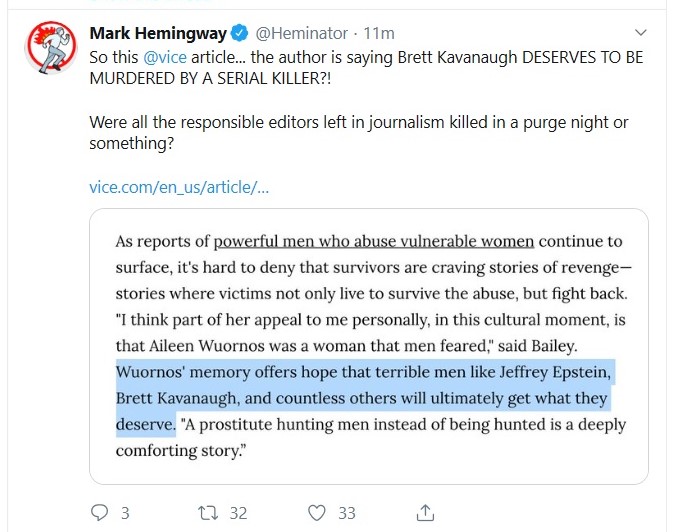 "I think part of her appeal to me personally, in this cultural moment, is that Aileen Wuornos was a woman that men feared," said Bailey. Wournos' memory offers hope that terrible men like Jeffrey Epstein, Brett Kavanaugh, and countless others will ultimately get what they deserve. 'A prostitute hunting men instead of being hunted is a deeply comforting story."

This demonstrates the complete lack of liberal principles about innocence until proven guilty when it comes to conservatives. Kavanaugh can be compared to Epstein, without the slightest pause about how factual that is.

Then Hemingway noticed that VICE quickly tried to tone it down, taking out the implied murder talk: 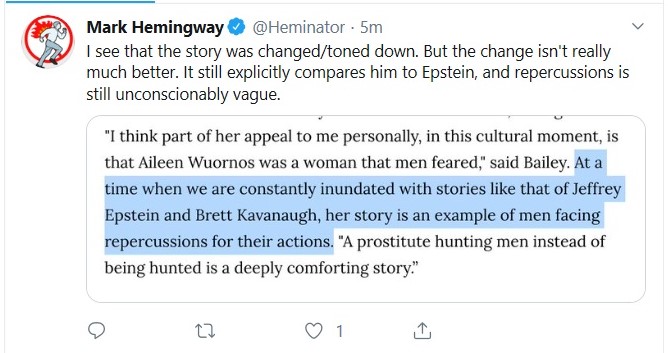 At a time when we are constantly inundated with stories like that of Jeffrey Epstein and Brett Kavanaugh, her story is an example of men facing repercussions for their actions. "A prostitute hunting men instead of being hunted is a deeply comforting story.” 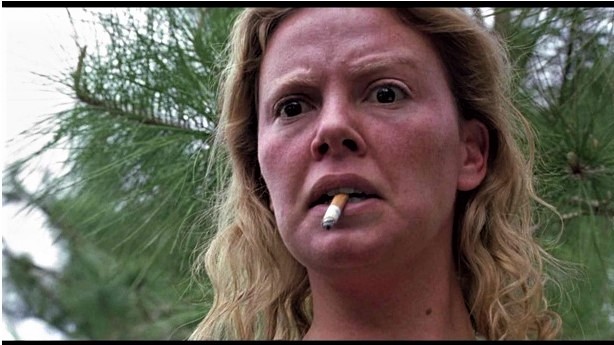 "Today marks the 10th anniversary of the death of Aileen Wuornos, a beautifully humane woman who will forever hold a place in my heart for her strength and courage in living through the horrific life cards she'd been dealt and that were completely out of her control," read a post on the now-defunct blog Feminist Rag in 2013, later reposted on a Men's Rights forum.

They also quote activist Dani Love, who uncorks the usual radical-left hot take on how capitalism and patriarchy spurred Wuornos to kill:

Still, there's no denying that Wuornos' story sheds light on the societal structures and circumstances that can force victims into a position where they feel that retaliation is the only option. "It's really easy for society to paint women and other oppressed people as villains when they react in unhinged ways that are often violent, but it's important to look at how capitalism, cis heterosexist patriarchy, and misogyny really put her in many of the positions she was in that made her murder," Love said. "She was a victim of so many structural oppressions. Sex workers in her field lack protection, which allows violence to happen. Sex workers cannot go to the police for help because they are directly connected to the oppression of so many marginalized groups who often are sex workers: women, black and other people of color, LGBT people."

VICE really lunges to be worthy of its name. It also has a new article today headlined "Teen Girls Join Forces to Convince People That Eating Used Tampons Is Normal."