Imagine CNN running with a story based on anonymous sources that Barack Obama thought his children were stupid. Or the Clintons thought Chelsea was a moron. Unthinkable? Naturally. But with the Trump family, anything goes. On CNN Tonight on Tuesday, Don Lemon brought on McKay Coppins of The Atlantic to tout his tabloidish story about how Donald Trump Jr. and Ivanka Trump are furiously fighting each other to be president.

We could suggest two words about these hot palace-intrigue stories about dynastic dreams: "Jeb Bush."

CNN, which imagines itself a global force for good journalism, pays zero attention to the sourcing of this "fascinating" soup. They just drank it in as Coppins ladled it out: Don Jr. "emerged as this kind of shouty, testosterone-soaked, you know, mini-Trump,"  while Ivanka stayed in the White House and "kind of very quickly figured out that she was out of her depth."

The Trump kids are dummies. CNN loves that stuff.

LEMON: You have so many fascinating anecdotes, like the one about how the president privately reacted during the Trump Tower meeting, when that went public. And you say watching cable news coverage at the fiasco, from the West Wing, Trump shook his head warily. "He wasn't angry at Don," a former White House official recalled, "it was more like he was resigned to his son's idiocy."

"He is not the sharpest knife in the drawer," Trump said with a sigh. [Lemon laughs] So, I mean, what a way to think of your kid!

COPPINS: Yes, and I mean, this is an important kind of insight into how Trump operates, which is that I'm told by people who know him that the way he thinks about his kids on any given day is largely shaped by how they're playing on cable news. So if they are doing well for him, if they are out there representing him well and staying out of bad headlines, then Trump is happy with them.

This is the same CNN that happily regurgitated thinly sourced anti-Trump gossip from Michael Wolff, and from Omarosa, and so on, and so on.

But when Ed Klein wrote the gossipy book Blood Feud about the Clintons and the Obamas five years ago, CNN Reliable Sources host Brian Stelter trashed his work on July 13, 2014: "To call it poorly sourced is a compliment. A lot of the book passages honestly sound too crazy to be true, like when Klein claims that one of Hillary Clinton's arguments with the president turned physical, with her jabbing him in the chest." 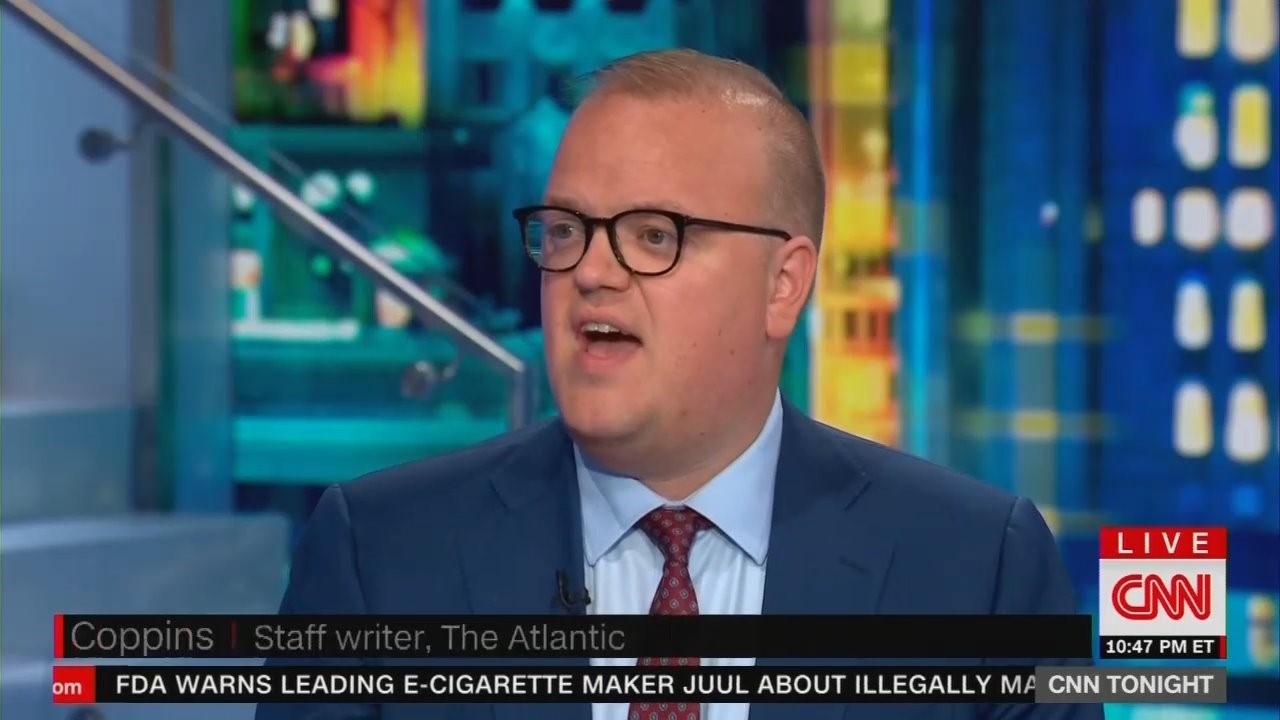 CNN also doesn't care that this is appearing in The Atlantic magazine, which endorsed Hillary Clinton for President in 2016, insisting (in CNN-echoing tones) that Donald Trump was "ostentatiously unqualified" and is "an enemy of fact-based discourse."

CNN also never mentioned that Coppins has been on the wrong side of the Trumps since his now-embarrassing BuzzFeed dispatch of 2014 (complete with a photoshopped Trump in the Oval Office) with the headline:

36 Hours On The Fake Campaign Trail With Donald Trump

Over the course of 25 years, he's repeatedly toyed with the idea of running for president and now, maybe, governor of New York. With all but his closest apostles finally tired of the charade, even the Donald himself has to ask, what's the point? On the plane and by the pool with the man who will not be king.

In fact, right before Coppins, Lemon had a panel of Anthony Scaramucci and Never-Trumper Peter Wehner, touting his latest jeremiad tap-dancing on the CNN line about how the president is losing his marbles for....The Atlantic.

PS: Andrew Surabian, a spokesman for Donald Trump Jr., tweeted against this article asking "Why did @TheAtlantic refuse to print my on the record statement on behalf of Don Jr. in response to @mckaycoppins ' false & thinly sourced piece? I've counted 25 instances of single sourcing or worse throughout McKay's piece. Is this what you call journalism, @JeffreyGoldberg?" Obviously, the answer is Yes. 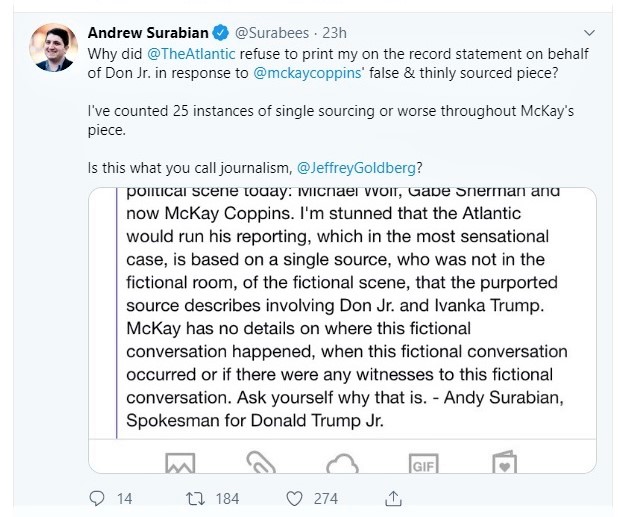