It's been fascinating to watch the media-bias deniers of the "mainstream" media dismiss socialist Sen. Bernie Sanders crying Centrist Bias with all the same contempt they show conservatives. On Monday, Sanders fan Keith Spencer at Salon.com obsessed with the identity of an anonymous Twitter account under the name "HoarseWhisperer," which for some mysterious reason was singled out by disgraced MSNBC anchor Brian Williams on his show The 11th Hour back on August 13. The hashtag #MyBernieStory was being used by gushy Sanders fans, but the Hoarse One went negative with it. Williams explicitly disparaged Sanders for calling out media bias as "a Trump talking point."

BRIAN WILLIAMS: Eliza, the tweet from last night that caught my attention from the political Twitter site called The Hoarse Whisperer --

"OK, since this is trending, here's #MyBernieStory. The year was 2016 and Bernie was already long eliminated from contention. An actual Democrat would have stop torpedoing the nominee and work to defeat Trump, but Bernie had books to sell. The end."

That kind of nicely sums up how some Democrats feel about Bernie when they hear him using a Trump talking point. What is the state of the Sanders campaign as you know it?

ELIZA COLLINS, THE WALL STREET JOURNAL: Well, the Sanders campaign is very frustrated right now with coverage, and they`re not alone. Democrats, Republicans, politicians generally, start to blame the media when they don`t like coverage. What is new and what is sort of a Trump-like attack line is tying "The Washington Post" to Amazon with no -- you know, he has no evidence here. And we saw him tone this down a little bit, but we saw Marty Baron come back and say this is a conspiracy theory.

[I]s this really the best example of a Democratic Sanders critic Williams could find? Was literally every other human on the planet unavailable for comment?

Just to recap: Brian Williams cited an anonymous troll who accused Sanders falsely of "torpedoing" Clinton to claim some Democrats are upset with the senator’s Trump-like talking points. And the anchor cited a stupid #Resistance tweet unconnected to the larger issue of Sanders' criticisms of the Washington Post.

Solid work all around, my man.

Accusing The Washington Post of a pro-Amazon bias isn't exactly implausible. It's like accusing NBC of being terrible at covering the Brian Williams fiasco -- which it was. But Williams was all about providing the "mainstream" with a "No Evidence" found defense. He turned to Washington Post reporter Robert Costa for more denials: 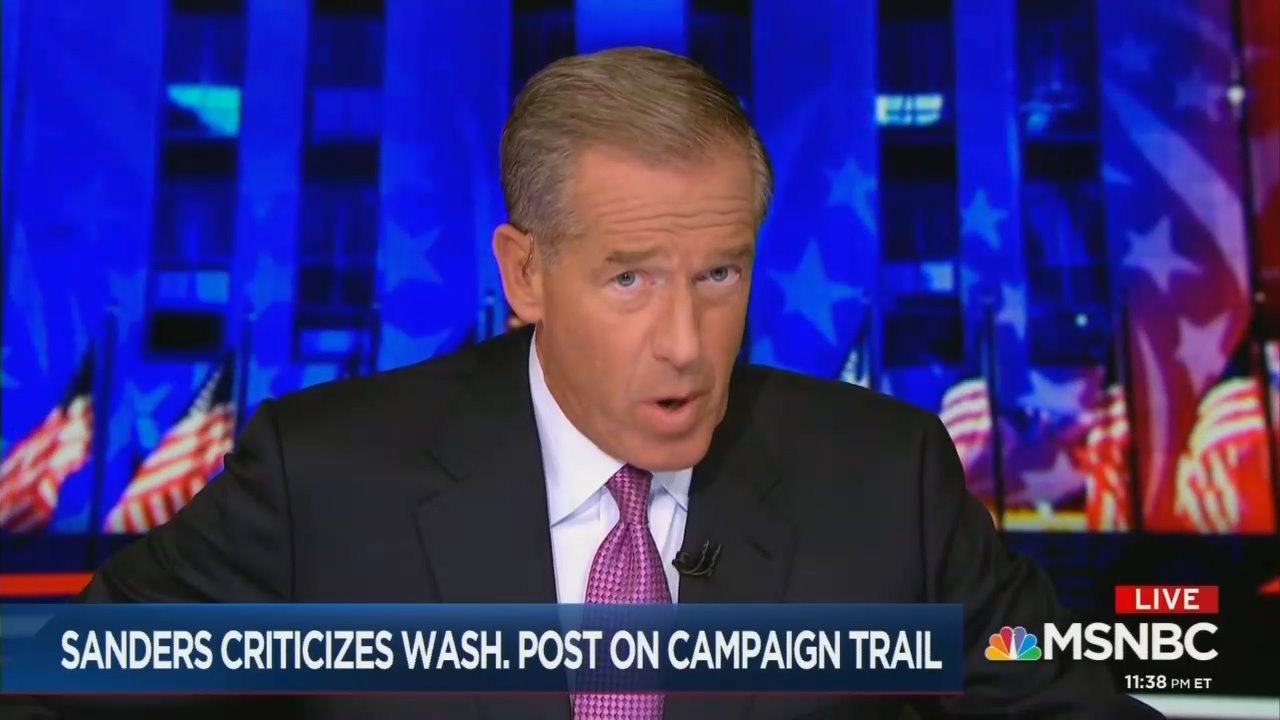 WILLIAMS: So, Robert Costa, when General Electric owned this building and this network, I was -- it coincided with the birth of the interwebs. And a lot of conspiracy theorists had us all on a conference call every morning with Jack Welch so we'd have the talking points from the electric power division, the nuclear division, electric trains, all of that.

Of course, it was never true, and I ask you just to show our homework, when was the last time you met or heard from Jeff Bezos about your coverage?

ROBERT COSTA, THE WASHINGTON POST: I've never heard from Mr. Bezos about my coverage. Marty Baron`s statement says it all. The Washington Post is a news organization, a reporting organization. It`s also a news organization, a newspaper that recently had an event with Senator Sanders. I sat down with the Vermont senator for an hour to talk policy, a productive conversation.

I was one of the first reporters to report on his presidential ambitions in 2014, long before he even announced. Took him seriously as a candidate, someone who was changing the Democratic Party with his proposals for Medicare for All, eliminating college debt. I've always seen him as a serious person and a serious candidate. But these recent comments were not serious. He knows The Washington Post reporters. He knows how we operate. And we operate as reporters.

Bernie Sanders has certainly received better press clips than Donald Trump. He has less reason to complain. But when you're a socialist, it's not surprising you would use a mega-corporation like Amazon as a bogeyman.