The July issue of the glossy fashion magazine Elle is touted as their first-ever Conservation Issue. It's a bumpy ride, since they do a photo shoot illustrating the receding glaciers of Iceland with a model and the usual credits: "Coat, $9,200, belt $2,100, tweed handbag, $3,300, leather bag, boots $1,350, all Chanel."

Up front, the eco-sensitive magazine has a spread promoting two models driving an RV up the West Coast in a "Vintage Getaway" promoting the website GoRVing.com. That's a fashionable way to make a carbon footprint....as is printing a glossy magazine touting conspicuous consumption.

Then there was the gush over leftist politicans grew very thick they made an all-star list called "Female Force." The introductory passage oozes:

Scientists have called our current, climate change-threatened era the Anthropocene, but as the eco-economist Kate Raworth once joked, women are left out of the narrative so often that it often feels like the Manthropocene. Presenting 27 standouts who prove that women are leading the charge to protect our environment and our future.

When it came to Congress, Elle touted Alexandria Ocasio-Cortez: 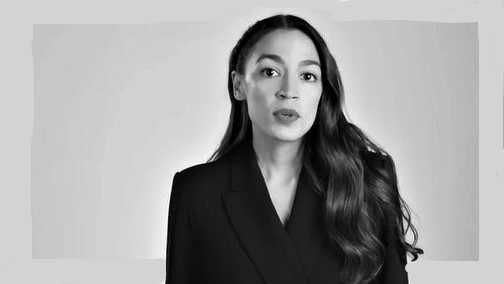 In February, rock star house rookie AOC, along with Senator Ed Markey, submitted the most sweeping climate change resolution yet -- the Green New Deal, which, if passed, would lay the groundwork for programs to reduce carbon emissions and boost the economy. The fine print: The legislation aims for the U.S. to transition from relying on fossil fuels and ultimately meet 100 percent of its power demand through clean, renewable, and zero-emission sources.

"[Climate change] is not an elitist issue; this is a quality of life issue," Ocasio-Cortez said at a House Financial Services Committee meeting in March. The speech, like most things she does these days, went viral -- after all, even the lipstick she work on last year's Democratic primary night sold out online -- and further solidified her status as her generation's leader toward a greener future.

But they also touted two other freshmen Democrats of color, Jahana Hayes and Ayanna Pressley:

Freshman congresswomen Hayes and Pressley are vocal supporters and cosponsors of the Green New Deal. Which is not to say that Hayes's support didn't garner criticism. When the Connecticut rep announced her stance in February, an attack ad followed in April, to which she responded "I'm not at all concerned." Pressley, who once proposed lowering the federal election voting age to 16,  so that engaged youth could vote for causes that will affect them the most, emphasizes the intersectionality of climate change. She says that when it comes to rising temperatures and erratic weather patterns, public health, human migration, and national security are all at stake -- and she's not shy about speaking up about it.

They rounded out the page with Rep. Barbara Lee and Mazie Hirono, both ultraliberals:

As climate change continues to threaten our ecosystems, women stand to lose more than men, say Lee and Hirono, the coauthors of the Women and Climate Change Act, which was introduced to the Senate in March. The bill addresses conservation's gender gap, arguing that the world's poorest will feel the effects the most, and the majority of that group is female. Planned Parenthood, the Sierra Club, and the Women's Environment & Development Organization have already lent their support to the bill; if passed, it would establish a Federal Interagency Working Group on Women and Climate Change, which would be a major win for female leaders (and constituents) everywhere.

Elle also touted Swedish teenage climate activist Greta Thunberg, noting her collected speeches will be released in a book titled No One Is Too Small to Make a Difference.