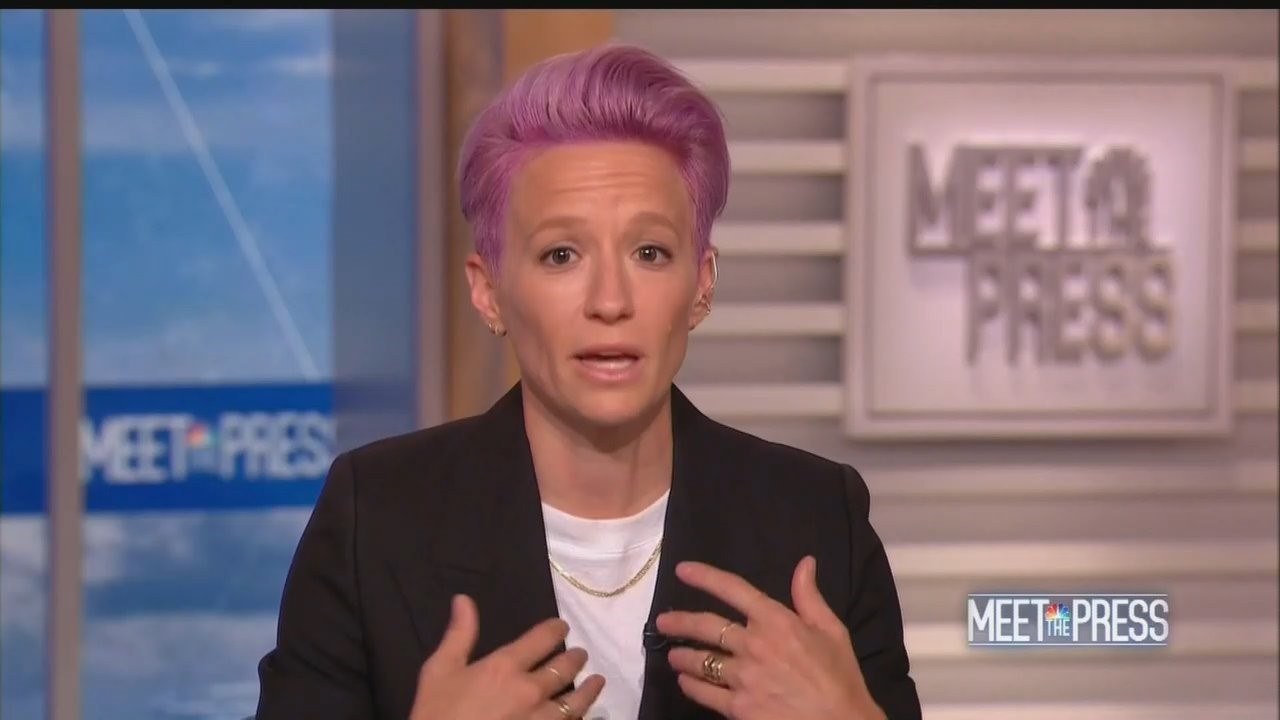 It makes sense on occasion for a Sunday show to offer an interview to athlete who devotes themselves to activism. But on Sunday's Meet the Press, Chuck Todd gushed like a geyser over controversial U.S. women's soccer star Megan Rapinoe. He began by insisting Rapinoe "right now is bigger than LeBron, bigger than Brady, bigger than just about anyone in the sports world and maybe beyond," and "we are very happy" for her to appear. The tributes kept coming:

CHUCK TODD: So a long-time boxing reporter, who's now a baseball announcer, Charlie Steiner, said to me, he viewed you as a modern-day Ali, and here's what Sports Illustrated wrote. "There are elements of a modern-day Ali, Muhammad Ali, the late boxer, in Rapinoe's co-mingling of sports and social activism, to say nothing of her ability to turn the media's attention, even when negative in certain circles, to her advantage." What do you make of the Ali comparisons?

MEGAN RAPINOE: Oh. That's very flattering. I don't know if I'm -- if I'm Ali, but I'm happy to be the biggest ally I can to Ali.

After some talk about women's pay, Todd turned to Rapinoe's national-anthem protests.

TODD: You were talking about at the beginning that you see an opportunity here to preach a message of unity. I think the hardest conundrum that a lot of us are in, in American politics, whether it's those of us that care about these institutions in this town or otherwheres is that how do you preach unity and at the same time you don't want to be near President Trump. And I get that. How do you do both? [Easy answer: You can't.]

RAPINOE: I'm figuring that out by the day. I think you inspire people.

TODD: What do you tell a Trump supporter who loves watching you? And is like, "I wish she'd go to the White House"?

And I understand people feel upset or uncomfortable. There's I think some feelings of disrespect about the anthem protest or things that I've said in the past, but ultimately I think I am here open and honest. I've admitted mistakes. I will continue to do that. I will continue to be vulnerable and be honest and be open and want to have that conversation because I think Trump's message excludes people that look like me and that are me, of course, but it excludes a lot of people in his base as well. And I think that he's trying to divide so he can conquer, not unite so we can all conquer.

That sounds like a politician's answer. Protesting the national anthem isn't the slightest bit unifying. Resistance is divisive by its very nature. Todd continued:

TODD: Anything he could do to change your mind about a visit to the White House?

RAPINOE: There's, like, 50 policy issues that we can probably reverse and get going. I mean, it would take a tremendous amount I think. I understand that progress is sometimes slow and I'll never close any door all the way. But I think it would take more than Trump is willing to do.

Todd asked "would you at all entertainment professionalizing your social activism, perhaps running for office or something else?" To her credit, Rapinoe said "I'm not sure I'm qualified for office." Todd protested "There's no qualifications for office these days. Rapinoe picked up on his anti-Trump point: "That's true. Up to 44 [Obama], I guess there was. You know what? I'm going to fight for equal pay every day for myself, for my team, and for every single person out there, man, woman, immigrant, U.S. citizen, person of color, whatever it may be. 'Equal pay,' as the great Serena Williams said, 'Until I'm in my grave.'"

In conclusion, Todd wrapped up this "she's bigger than Brady" segment by praising how humble she is!

TODD Well, you have fun. You always have a smile on your face. That is --

RAPINOE:  That is true.

TODD: It's been great meeting you. You have a lot of humility, I have to say that.