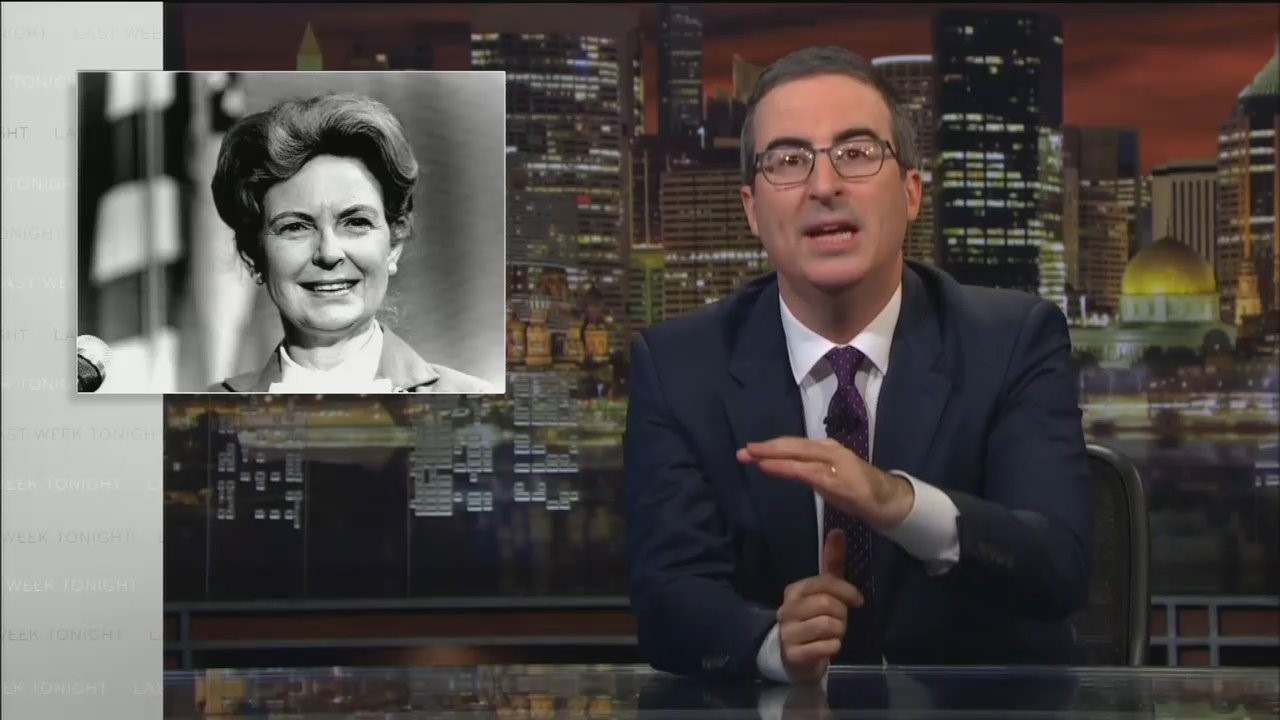 On the June 9 Last Week Tonight on HBO, host John Oliver uncorked one of his long faux-comedic crusades for a left-wing cause, in this case the utopian dream of an "Equal Rights Amendment."

Oliver complained that it was so close to being passed in the 1970s, but "all that momentum came to a crushing halt, which many historians credit to just one woman, Phyllis Schlafly. If you've never heard of her, congratulations. But she founded a group called 'Stop ERA,' and she was all over the media in the Seventies, spreading fear about the ERA. Some of what she argued it would do -- like lead to women being included in the military draft -- was absolutely possible. But a lot was bulls**t, like claiming it would outlaw sex-segregated bathrooms. And then there was also this nonsense."

Schlafly told Barbara Walters it was possible that custody of the children in a divorce could be split between the two parents if all rights were equal. That interpretation was possible, but that outcome was somehow preposterous, if not false. Today's liberal "Fact Checkers" would say it's false before the ERA was passed.....which would help it pass. Those "Fact Checkers" come in handy. Oliver turned it into amputating your kids' toes to equalize everything.

Then Oliver turned to the personal insults, saying the facts didn't matter at all to Schlafly:

OLIVER: She was basically a pre-internet internet troll, gleefully greeting audiences with lines like this.

SCHLAFLY: I would like to thank my husband, Fred, for letting me come today. I love to say that, because it irritates the women's libbers more than anything that I say. (Laughter)

That's a classic line to make conservatives giggle, but Oliver turned it into a chance to suggest Schlafly's husband must have found her to be a seriously undesirable wife:

OLIVER: Okay, that thank you to Fred is entirely unnecessary for two reasons: One, wives are not property of their husbands, and two, I'm not sure how big a sacrifice it was for Fred to spend a few hours not hanging out with Phyllis Schlafly. (Laughter) If I had to guess, Fred was absolutely okay with Phyllis getting out of the house for the day. The night, even. I mean, where's this rally? If it's more than ten minutes away, might make sense to just stay over. And if it's any later in the week than, say, Wednesday, at that point, just stay the weekend, Phyllis. No thank you necessary. Don't even mention it or anything else to Fred ever again.

This was hailed by liberal journalists as an "expert dunking."

Phyllis Schlafly died in 2016 at the age of 92, and Fred died in 1993. But their nearly 50-year marriage is still fuel for posh British-accented leftist wisecrackers. Imagine Fox News making this joke about how Bill Clinton enjoyed Hillary being gone all weekend, and then imagine how funny Oliver would find that.