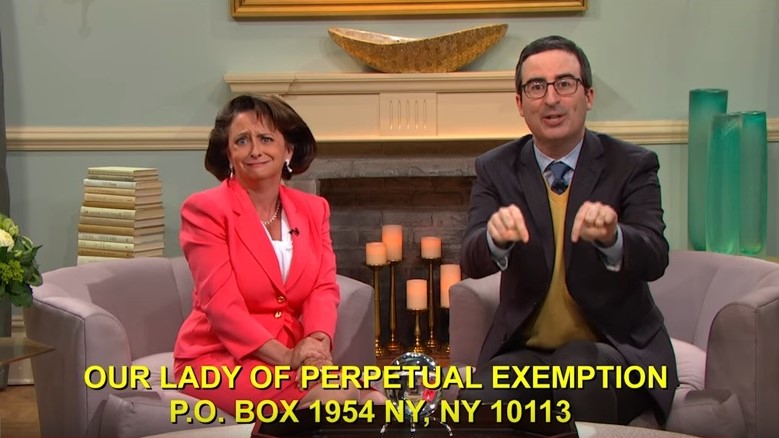 Via a tweet from Seth Davis at The Federalist, we learned radical-left journalist Ken Silverstein is exposing liberal-media hero John Oliver at Observer.com (until recently owned by Trump son-in-law Jared Kushner). It seems the moralist who preached against income inequality and tax dodging -- even briefly creating a church-mocking charity "Our Lady of Perpetual Exemption" in 2015 -- is practicing what he preached against. In mid-July 2014, the usual left-wing sites spread the Amens and Hallelujahs when Oliver sermonized against the wealth gap and the rich people exploiting the poor:

OLIVER: At this point the rich are just running up the score. If our economy was a little league game, someone would have called it by now. But what sets America apart is that, in this time, we've actively introduced policies disproportionately benefitting the wealthy. Like cutting income tax and capital gains tax rates for the richest in half. As well as that weird tax rebate for orgies with fancy Eyes Wide Shut masks. The password is ‘Fidelio.’ You would think, you would think in a democracy, policies that benefit very few people at the expense of very many would not be able to succeed. But they have. And I think the reason for that may lie somewhere in Americas greatest quality: optimism. It’s basically in how susceptible Americans are to this:

OLIVER: Yes – I mean no! Hold on! That sounds great. The problem is, it makes no sense. Economically, mathematically, or even grammatically. And yet we believe him. We believe him and there's a poll that I think explains why. A few months ago, Pew Research revealed that 65% of Americans believe the wealth gap is increasing. And 60% believe our system unfairly favors the wealthy. But, and here’s the key, 60% also believe that most people who work hard enough can make it. Or in other words, yeah, I can clearly see this game is rigged which is going to make it so sweet when I win this thing!

Silverstein reported that just months before, Oliver had a tax attorney set up two revocable trusts, one for him and one for his wife Kate, to hide the couple’s purchase of a snazzy $9.5 million 39th floor Manhattan penthouse with "panoramic views of the city skyline." They "used a tax loophole created by Donald Trump himself back in the 1970s.”

But just four months before Oliver’s July show, he had hired slick New York law firm Proskauer Rose LLP, which, in addition to union-busting and representing BP America, ChevronTexaco and ExxonMobil, specializes in helping the rich find tax breaks and buy real estate. Proskauer also has a long-time Private Client Services group, whose “lawyers handle complex tax and estate planning matters for wealthy multinational families,” as well as “executives, Internet entrepreneurs, art collectors and investors, professionals and real estate developers, among others,” according to its website.

Oliver’s lawyer at the firm was Jay Waxenberg, who “focuses his practice on estate and tax planning and estate and trust administration.” Waxenberg, the website goes on, “represents many families with significant multigenerational wealth, and has assisted them in the structuring of their estate plans so as to minimize gift, estate and generation-skipping taxes in the transmission of their wealth through several generations.”

In other words, Waxenberg is exactly the type of fancy pants attorney who helps his 1 percent clientele get the tax breaks and use the loopholes that Oliver gets such mileage deriding on TV.

In Oliver’s case, Waxenberg set up two revocable trusts — JO, named for John Oliver, and KNO, named for his wife Kate Norley Oliver — with Waxenberg as the trustee and his law firm serving as the trusts’ registered address. The trusts were then used to create a shell company called Hoagie’s Place LLC, named for Oliver’s beloved dog. Incidentally, Kate Norley Oliver’s New York voter registration shows she is a Democrat and lives in the penthouse in question.

In 2015, Oliver and his wife used Hoagie’s Place to purchase a 39th floor penthouse at 60 Riverside Blvd for $9.5 million. Property records show they put half down and took out a $4.75 million mortgage from J.P. Morgan. Neither Oliver nor his wife’s name appears on the mortgage, or any of the other property records discussed in this story. Hoagie’s Place is identified as the buyer in the mortgage, but its listed address is an office building in Encino, California that houses dozens of shell corporations and revocable trusts.

The New York Times reported on the sale in 2015, that the seller was Andre Crawford-Brunt, then the global head of equities trading for Deutsche Bank, while “the buyer’s identity was shielded by the limited liability company Hoagie’s Place.”

[E]ven though Oliver paid $9.5 million for his penthouse, the city assessed its market value for tax purposes at just $1.3 million. However, only $515,000 of that amount was billable for property taxes. At a rate of 12.8 percent, Oliver normally would have paid $66,390.

However, property tax records show that, thanks to Trump and Roy Cohn, Oliver gets the very generous 421-a tax break on the penthouse. Hence, his property’s billable value after the exemption plunged by over $300,000, and he owed just $27,343 for 2017. That comes out to a property tax rate of roughly 0.25 percent, which would make Ronald Reagan and Ayn Rand dance in their graves from happiness.