As part of CBS kissing up to CBS, Late Show host Stephen Colbert brought on 60 Minutes correspondent (and former Evening News anchor) Scott Pelley to promote his new book Truth Worth Telling. No one was going to bring up Dan Rather, not to mention sexual harassment scandals at CBS News, from Pelley's dismissed 60 Minutes colleagues Charlie Rose and Jeff Fager to CBS's harasser at the top, Les Moonves. No, Pelley came on to lecture about how President Trump and foreign governments are poisoning the information well. It sounded like...collusion.

Colbert asked "What do you think is the most underreported story right now?"

SCOTT PELLEY: To be frank, I think [President Trump] is part of the most important story that we’re not saying enough about, and that is the disinformation that has become prevalent throughout our society. We live in a time where never in human history has more information been available to more people. That’s a great thing. But never in human history has more bad information been available to more people. That is a big change in our generation, for the next generation, a big change for America. You have to have solid, reliable information for people to make decisions about their families and their country.

And so much of what we are reading and seeing is a cynical attempt by hostile foreign governments or self-dealing politicians to poison that landscape. What’s the most dangerous thing to a democracy? Is it terrorism? War? Maybe another Great Recession? I don’t think so. I think the biggest danger to a democracy is poisoning the information.

In other words, democracy is dying in darkness. Colbert helpfully asked how do we combat this misinformation, and predictably, Pelley implied the Old Media, the liberal media are the gold standard. Audiences need to bow to their authority and expertise: 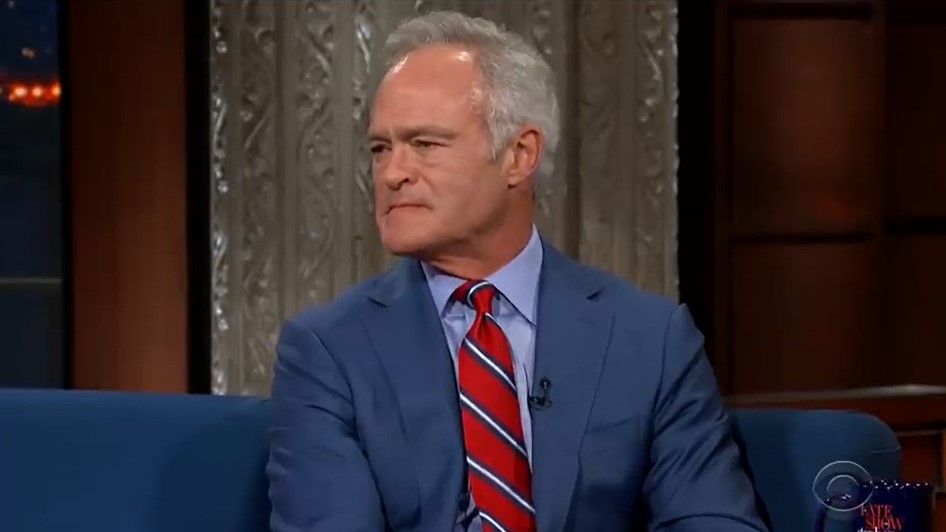 PELLEY: You know, our audiences have a lot to do with it. They have to take responsibility. They have to be skeptical. They have to go to — this sounds a little self-serving, but they have to go to brand names that they can trust. Maybe that’s CBS News. Maybe it’s the Dallas Morning News, or the Chicago Tribune, or ABC News. But what you know when you go to one of those sources is that there are people who have been trained in journalism, being supervised by people who have been doing this for 20, 30, 40 years, and there are enormous consequences for them if they get something wrong. So they’re trying like hell to get it right.

He added "I don't feel enough people are taking that responsibility seriously. The Founders were counting on use to be active, pro-active citizens of this country. That's why they gave us the power."

It should be said that just having experience in journalism for decades isn't enough to make you trustworthy, as Dan Rather proved. It can also be said that at sites like NewsBusters, you have senior people who've been reporting on liberal bias for 30 years (ahem). Evaluating the credibility of your news media should involve engaging with media critics and their arguments, not just dismissing their criticism as "poisoning the information."

PS: Just before the lecture kicked in, Colbert pointed out that on his first night as the official Anchor of the CBS Evening News in 2011, Pelley led with the war in Afghanistan, while everyone else apparently led with Rep. Anthony Weiner texting his private parts to minors. Pelley explained: "At the time, my thinking was -- 'Who's Anthony Weiner?' He's never passed a bill in the Congress, he's not the chairman of any committee, much less an important committee. National policy is not going to change if he is hounded out of office. On the other hand, on that day, we had Americans being killed in Afghanistan. now what's the most important thing that happened that day?"