ABC senior national correspondent Terry Moran was feeling sassy about the pro-lifers on Twitter on Saturday. Inspired by political analysis in the men's fashion magazine GQ, which argued "The 'pro-life' states are not pro-life states," Moran slammed Alabama, Georgia, and Missouri.

Moran echoed the fashionistas. Let's redefine "pro-life" to mean every issue, and not killing unborn babies. 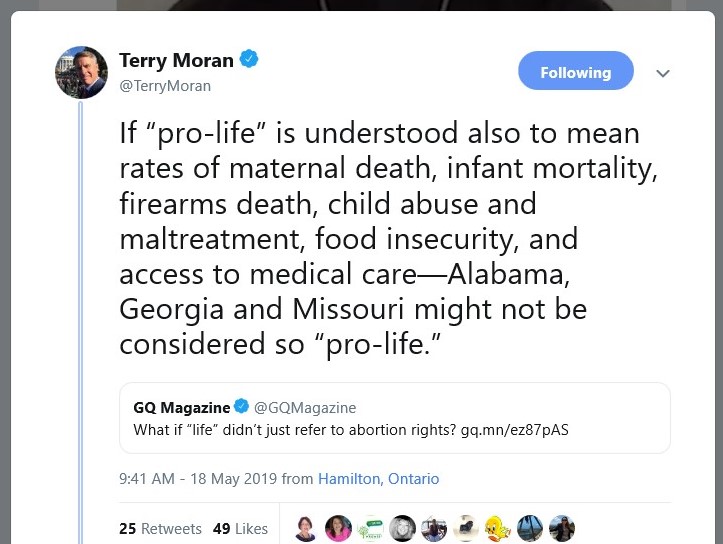 "Food insecurity" and abortion are hardly on the same plane of life-and-death matters. Malnutrition, perhaps, but not fear of acquiring food. Did Moran look up charts, or just assume that Deep South states are always at the bottom of the barrel on health and death statistics?

GQ argued "On a per capita basis, Alabama sentences more people to death than anywhere else in the country." If a state like Alabama executes convicted murders, that somehow means they're not "pro-life." You can be both anti-abortion and anti-death penalty, but executing a murderer is much different than executing an innocent baby. (And when you call it "executing," the fact checkers all get out their red flags.)

If it's fair to play games with terminology, then we can say places like New York aren't "pro-choice" when they won't let their citizens buy a Big Gulp. These games are a snotty way of diverting attention from the death of unborn babies.

Moran issued another tweet: "Power right now, and for many years in those states, rests squarely in the hands of politicians who proclaim themselves 'pro-life.' They have clearly failed their people when it comes moms dying in childbirth, babies dying young, kids killed by firearms etc." 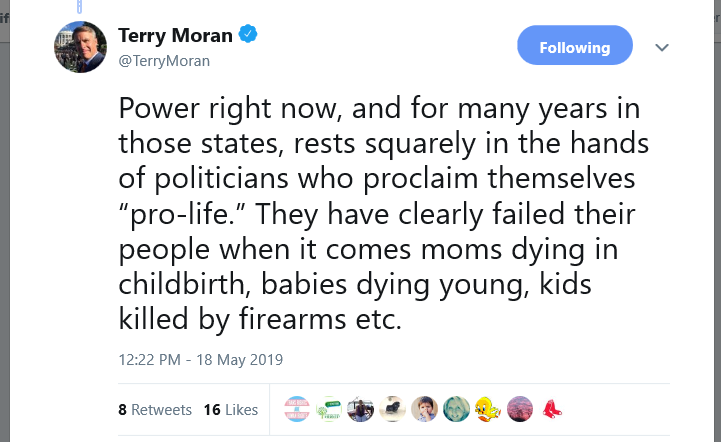 A look at statistics shows Georgia is last in maternal mortality, with 46.2 deaths per 100,000 births. But those deaths are accidents, not intentional killings. Liberals do this to try and change the discussion back to issues where they feel morally superior -- like redistributing wealth, and redistributing your firearms.