The New York Times was the toast of the Democrats for a May 2 article on an opinion survey with this provocative title:

Tuition or Dinner? Nearly Half of  College Students Surveyed in a New Report Are Going Hungry
Many routinely skip meals and take ‘poverty naps’ because they cannot afford groceries. 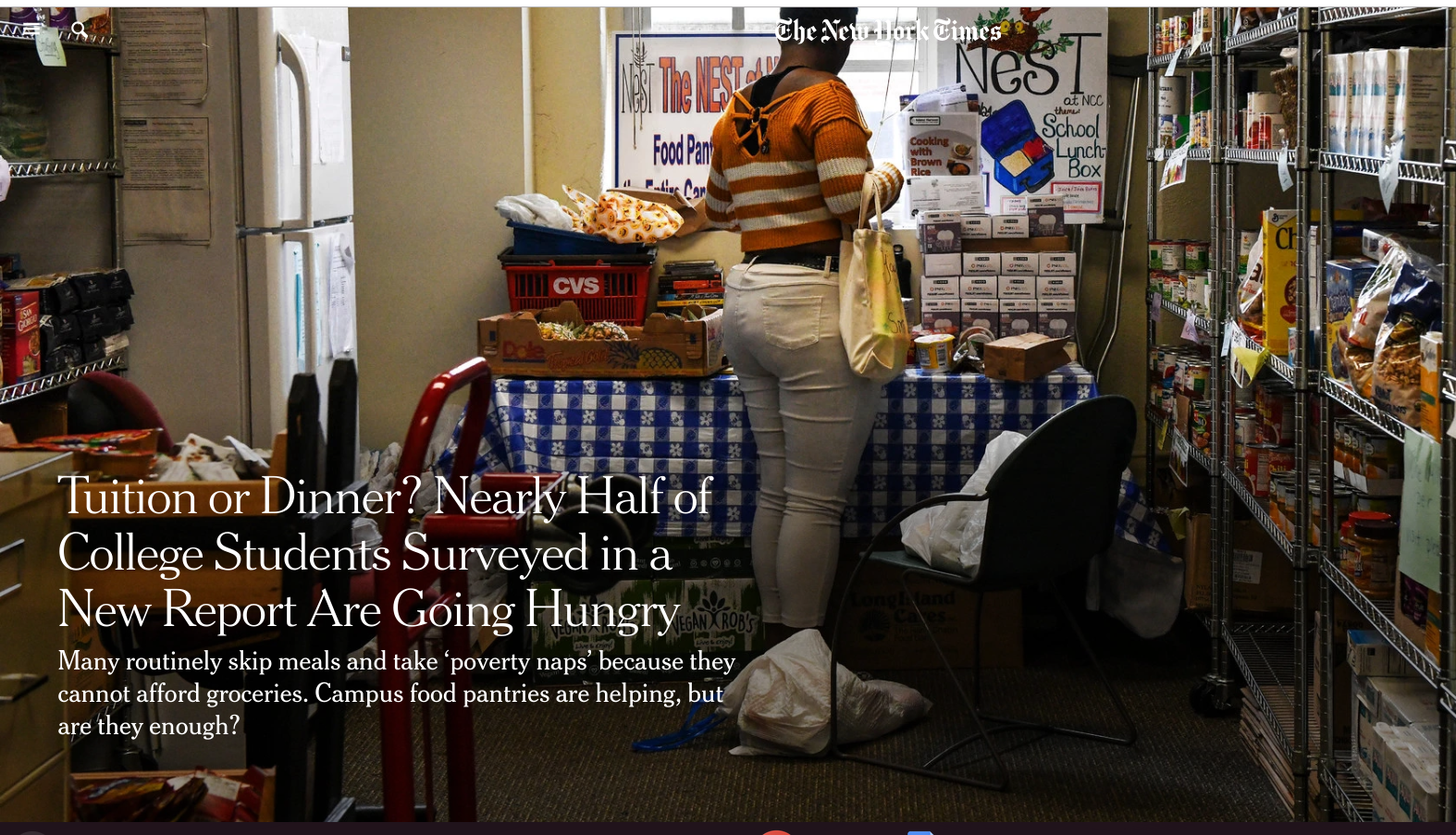 In the coming weeks, thousands of college students will walk across a stage and proudly accept their diplomas. Many of them will be hungry.

A senior at Lehman College in the Bronx dreams of starting her day with breakfast. An undergraduate at New York University said he has been so delirious from hunger, he’s caught himself walking down the street not realizing where he’s going.

A health sciences student at Stony Brook University on Long Island describes “poverty naps,” where she decides to go to sleep rather than deal with her hunger pangs....

A survey released this week by Temple University’s Hope Center for College, Community and Justice indicated that 45 percent of student respondents from over 100 institutions said they had been food insecure in the past 30 days.

Top Democrats took to Twitter. New York mayor Bill de Blasio: THIS is just another example of what I’m talking about when I say there’s plenty of money in the world, it’s just in the wrong hands."

Sen. Kamala Harris: "America is one of the wealthiest countries in the world, but many of our students still go hungry and into debt as they try and pay for a quality education."

Marianne Williamson: "Half of America’s college students go hungry - and this is the richest country in the world. Officialdom however tells us that the economy is doing really well!"

National Review's Robert VerBrueggen wasn't buying these anecdotes as a real picture of college kids today. He took it apart:

-- Hunger and "food insecurity" are two different measurements. The first is physical, the second is often emotional. "For instance, a student could be classified as 'food insecure' if he said he worried whether his food would run out, 'couldn’t afford to eat balanced meals,' and ate a bit less 'because there wasn’t enough money for food.'” That's not at the level of "delirious from hunger" or "poverty naps."

-- "This survey had a very low response rate, meaning that the people who answered it are almost certainly not representative of the general population....Most students who were sent the #RealCollege survey did not answer it. Institutions sent survey invitations to an estimated 1,478,935 students and 85,837 students participated, yielding an estimated response rate of 5.8%."

-- This survey offered a chance to win $100 for filling it out. "We’ll just say it carries a significant risk of skewing the sample toward poorer, struggling students, and that anyone trusted with designing a large survey should know it does."