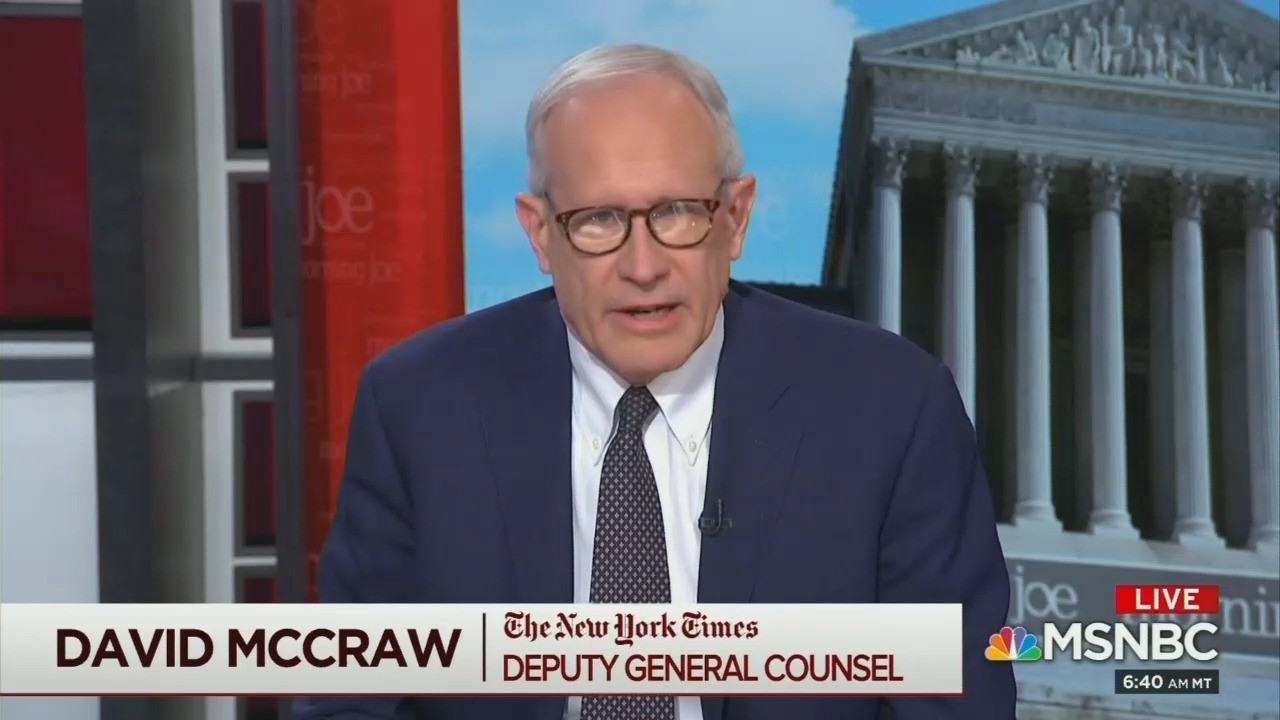 Insider trading is illegal, but not insider book reviewing. The New York Times Book Review ignores a lot of books, but not books written by executives of The New York Times.  Their deputy general counsel David McCraw has written a book titled Truth In Our Times: Inside the Fight for Press Freedom in the Age of Alternative Facts. The review was simply headlined "Journalism's Advocate."

Former Obama-appointed U.S. Attorney Preet Bharara was selected to celebrate the Times. This article sounded more like an infomercial than a book review.

He began on Sunday with an archetypal liberal-media trope. "For many Americans, the great reason to cheer during the sleepy low-scoring game that was Super Bowl LIII was not the Patriots' victory." Forget the football game -- "many Americans" cheered instead for the self-glorifying television ad purchased by The Washington Post (which aired late in the game). A commercial honoring the media's role was "saddening," he wrote:

Merely having your business model enshrined in the First Amendment to the Constitution is no longer sufficient; now you need airtime during the Big Game — alongside Bud Light, Hyundai and Doritos — to respond to crude and corrosive attacks on the free press by a president and his supporters with their incessant charges of “fake news!”

Fake news. It is a juvenile epithet, but it has power because it is both thoughtless and memorable. It is also a debate stopper. When uttered with a contemptuous smirk, it’s the equivalent of “shut up!” No intelligent response can suffice, no evidence-based retort can win. The power of the easy “fake news” slander is also insidious. It is just mischievous enough to be adopted by your children in the schoolyard; and it’s just menacing enough to be seized upon by actual dictators seeking to suppress critical voices in repressive regimes. “Fake news” has the charm of comedy, the ease of a sound bite and now the imprimatur of the president of the United States of America.

That's written like the Preetinder Bharara who donated $1,000 to Barack Obama and $500 to John Kerry, one of the "many Americans" who count on The New York Times to keep the Democrats in the majority and in the White House. Bharara's so in the tank he never addresses that sometimes news stories are...false, or fake. He also never addresses a broader definition, that "fake news" can mean thousands of news minutes devoted to "informing" the public that Hillary Clinton will be president, or insisting Donald Trump may have colluded with the Russians to steal the election.

In the book, McCraw admits the obvious:

He is candid and cleareyed about the lean of his paper’s readers and its opinion writers. He says that by the “time of Trump’s election there was no doubt about the politics of our core readership: It skewed left, and, in any measure of its opposition to Trump, it went off the charts.” He concedes, moreover, that The Times’s “Op-Ed columns and contributors are overwhelmingly anti-Trump, every day.”

Then it gets humorous:

But he is insistent about the overall political objectivity of the news people, the beat reporters. He argues that the everyday news folk, at The Times and elsewhere, are not generally partisan. He doesn’t claim that they are perfectly detached, disinterested, nonideological chroniclers. He acknowledges a certain lean on their part too. “Many journalists are biased,” he concedes, but “just not in the way that most people think about it.”

By McCraw’s reckoning, reporters tend to champion the underdog, and it is this worldview that skews their coverage. “The easy rap,” he writes, “is that most reporters lean liberal (true), and that dictates how they cover a conservative like Trump (false). … They believe, all other things being equal, that the little guy is getting screwed. … The reportorial default is to think that most regulations are good, the rich and connected don’t need more money or more power.” He insists, therefore, that any bias “is not a left or right thing.” As partial proof, he says, “based on nothing more scientific than my own conversations around the newsroom, Trump may actually have been better liked than Andrew Cuomo and Bill de Blasio.”

And if you believe that, you should ask if they voted for Republicans instead of Cuomo and de Blasio.