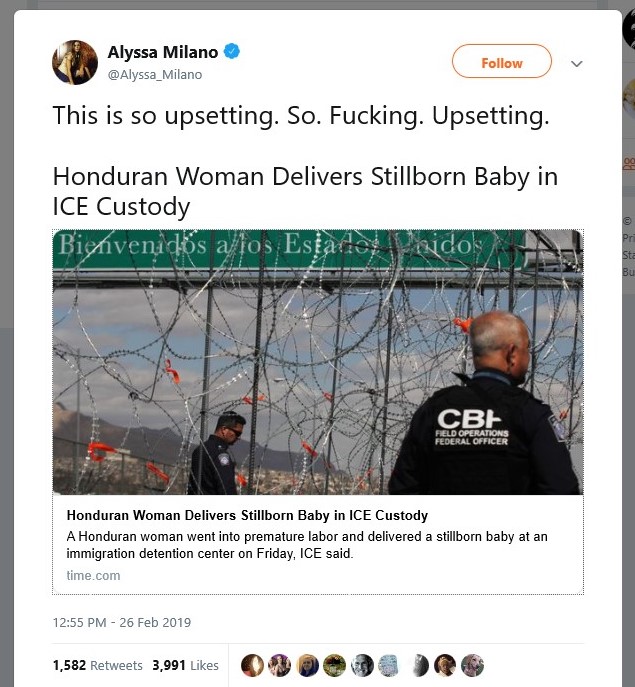 A 24-year-old Honduran woman went into premature labor and delivered a stillborn baby at an immigration detention center on Friday, Immigration and Customs Enforcement (ICE) and Customs and Border Patrol (CBP) said.

The woman was 6 months pregnant when she was apprehended by the Boarder [sic] Patrol near Hidalgo, Texas on Feb. 18, the joint statement on Monday said.

The announcement comes as ICE and CBP are under increased scrutiny for the treatment of vulnerable migrants and asylum seekers in their care....

CBP and ICE said that the young woman was taken to a hospital, received two medical screenings, and was cleared for release last Thursday. She was brought to ICE custody at Port Isabel Detention Center outside Brownsville, Texas, to be processed for release in the afternoon on Friday.

On Friday evening, the woman said that she was experiencing “abdominal discomfort.” CE Health Service Corps examined her, and the clinical director said that she needed to go to a hospital. The woman told them that the baby was coming, and EMS was called.

Before medics could arrive, the woman delivered an unresponsive baby boy. The mother and child were rushed to a hospital in Harlingen, Texas, where the child was pronounced dead.

You know the media's liberal when Hollywood leftists eagerly spread their stories on social media.

This story made no attempt to explain how or why a woman who is six months pregnant is traveling more than a thousand miles from Honduras to immigrate illegally into the United States. Anything that happens in ICE custody (at least under Trump) is assumed to be ICE's fault. Any policies ICE had under Obama were almost completely non-"newsworthy."

There was additional feminist hypocrisy in social media at the concluding paragraph of this brief story:

“Although for investigative and reporting purposes, a stillbirth is not considered an in-custody death, ICE and CBP officials are proactively disclosing the details of this tragic event to be transparent with Congress, the media and the public,” the statement said.

Milano added to the anti-ICE thread by retweeting Hillary Clinton sharing a CBS News story on ICE detaining infants -- with their mothers, as liberals claim mothers who bring their babies should be released, pronto. 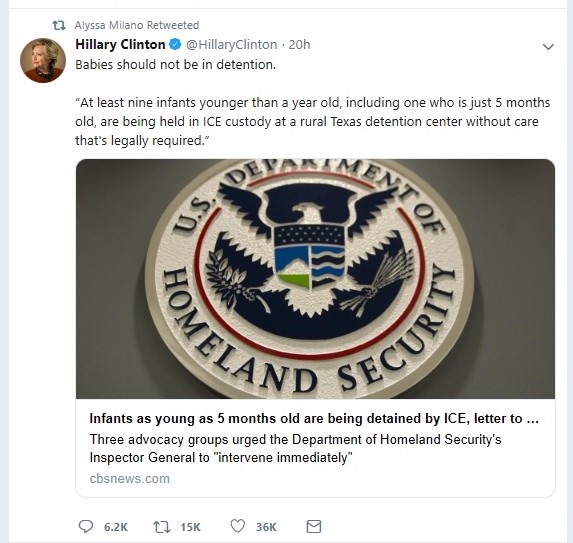 CNN and Axios also had an anti-ICE story this week on sexual harassment of unaccompanied minors in ICE custody, a report brought by liberal Congressman Ted Deutch. The media seem to share the Abolish ICE agenda of the hard left.