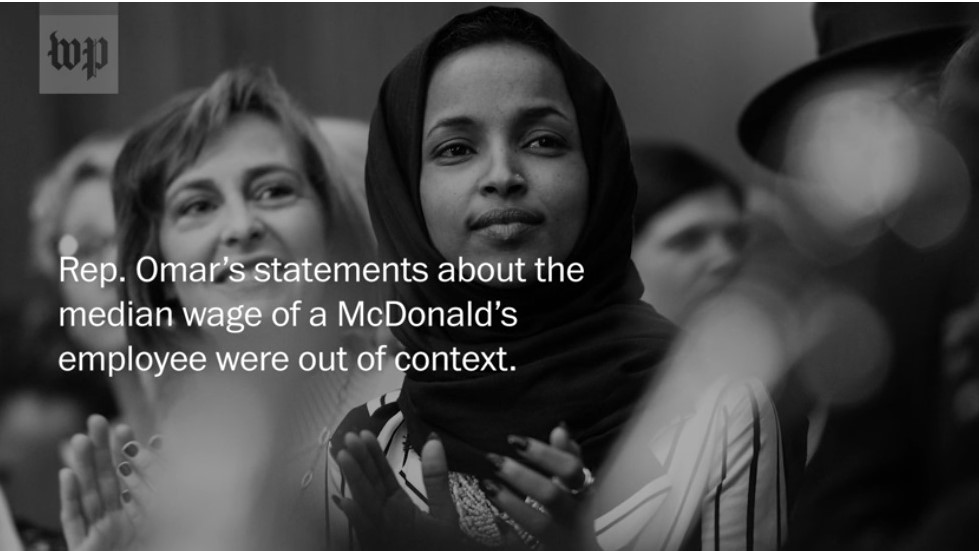 The Washington Post "Fact Checker" threw a penalty flag on Tuesday at freshman Rep. Ilhan Omar (D.-Minn.), but not about her scandalous chatter about Israel. It's about wages paid at McDonald's. She mangled her numbers badly -- by as much as 300 percent -- but chief "Fact Checker" Glenn Kessler only rated this as "2 Pinocchios," or "half true." Half? This was Kessler's quote of Omar:

Apparently the "half" that's true is the pay gap between CEO to burger-pusher is dramatic, even when compared to other restaurant conglomerates. But here's how badly Omar mangled the facts. Kessler noted that a witness at Omar's hearing explained he earns $11 an hour, which Kessler noted "adds up to $22,880 a year. That’s three times $7,000."

Where did Omar get her "facts"?

“The Company considered all full time, part-time, seasonal and temporary workers employed on such date,” the disclosure said. “Our methodology was straightforward and transparent; we did not exclude employees or make any adjustments to compensation. Using this methodology, 2017 total compensation for our median employee (a part-time restaurant crew employee located in Poland) was $7,017.” 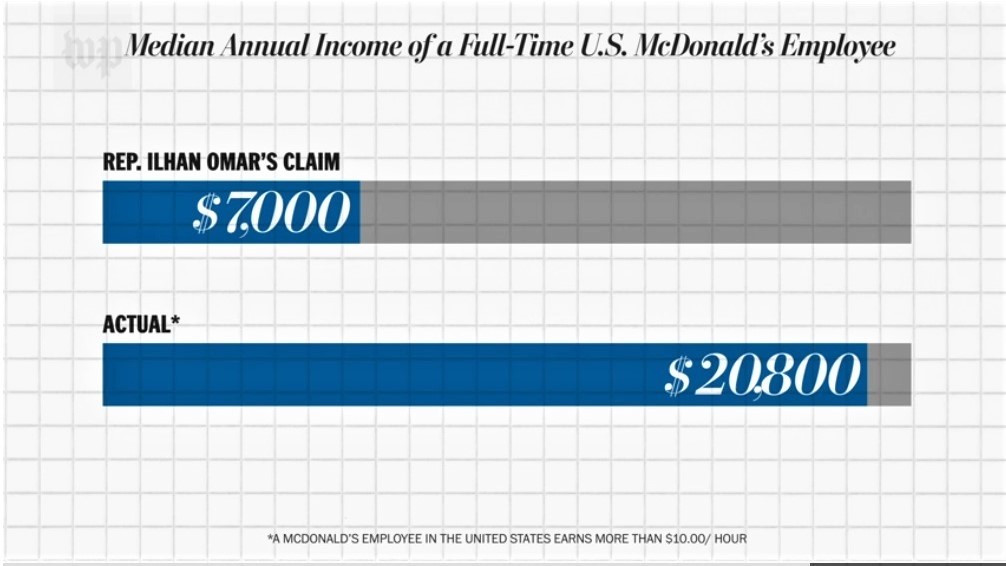 But Omar was not talking about part-time workers, let alone one in Poland. She referred to 7,000 [dollars] “for the worker who has put in 40 hours a day.” (The spokesman said she misspoke, and meant a 40-hour week.) The article in Nation’s Restaurant News did not note that the $7,000 figure was for a part-time worker in Poland....

Any way you slice it, Omar’s citation of $7,000 a year is way too low for a U.S. hourly worker at the company.

Omar is a freshman, and may not be used to the "big leagues," where national media may feel occasional pressure to evaluate your game. And yet, Kessler concluded with a slap of the wrist:

Omar relied on an article that did not make clear the caveat in McDonald’s disclosure. But we always warn politicians (and their staffs) that it is important to check the original source, as news media accounts may be inaccurate or misleading.

According to Kessler's own criteria, 2 Pinocchios means:

Significant omissions and/or exaggerations. Some factual error may be involved but not necessarily. A politician can create a false, misleading impression by playing with words and using legalistic language that means little to ordinary people. (Similar to "half true.")

This underlines how subjective these ratings are. Fifteen months ago, the WashPost Kessler Kops gave Vice President Pence THREE Pinocchios for a statement they conceded was factually accurate: “There are more Americans working today than ever before in American history.” Once they were mocked (gloriously) by Mollie Hemingway at The Federalist, they claimed applause from the audience earned him the rating!