On ABC's Jimmy Kimmel Live on Tuesday, Kimmel had "God" (Billy Crystal) and "Satan" (Foo Fighters frontman Dave Grohl) fighting over who was stuck with Sen. Ted Cruz for eternity. "Satan" lost Rock-Paper-Scissors, so Cruz was comically destined for Hell.

Crystal joked that he and Grohl/Satan has patched up their relationship...."because if Taylor Swift and Katy Perry can make up, why can't we? Boom!" They play some Fortnite, go out for brunch, and then play the game "Who Goes Where."

CRYSTAL/”GOD”: So which one of us is going to get Ted Cruz?

GROHL, protesting: You won. He's yours.

CRYSTAL: No, no, I don't want him. Jimmy, that face for eternity. Ugh.

GROHL:  You always do rock!

CRYSTAL: That’s because I created all the rocks!

This is what passes for wit. Ted Cruz took to Twitter for a rebuttal on Wednesday morning, poking Kimmel about his "Christmas spirit" and then tweaking him all over again about beating him in a one-on-one basketball game for charity in June after Kimmel compared his face to a blobfish.

Cruz wrote "It’s almost as if Jimmy’s feelings are still hurt that I kicked his ass at hoops...." 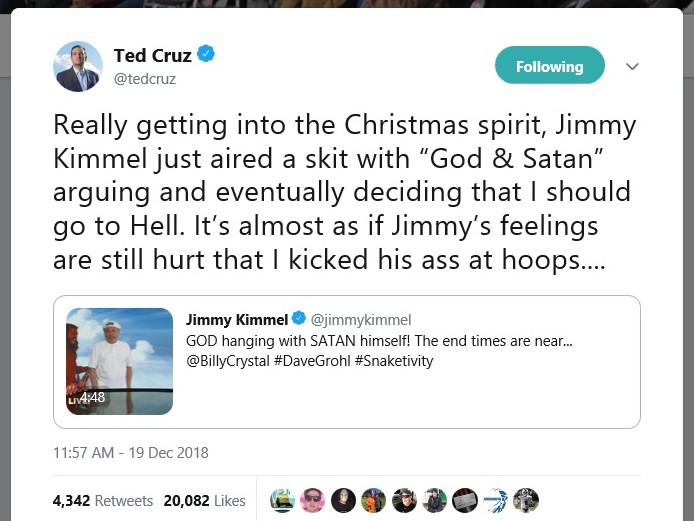