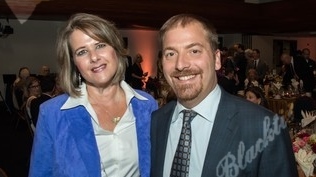 NBC's Meet the Press moderator Chuck Todd has an ongoing conflict of interest in political coverage with his wife, Kristian Denny Todd, whose Maverick Mail & Strategies firm does direct-marketing campaigns for Democrats.

A search of the campaign-finance database Open Secrets shows Mrs. Todd has donated $13,250 to federal candidates so far in this election cycle, all of them Democrats. She also donated $540 to Act Blue, a "nonprofit organization that builds tools Democrats count on to run small-dollar fundraising programs."

Most of her money went to two candidates. She gave the maximum $5,400 to Sen. Tim Kaine, matching the $2,500 Mrs. Todd donated in February 2012. She also donated $5,000 to Rep. Joseph Crowley (D-N.Y.) two weeks before he lost his primary to "democratic socialist" phenom Alexandria Ocasio-Cortez on June 26. She also donated $500 to Doug Jones, who defeated Roy Moore in a special Senate election to replace Jeff Sessions in December 2017.

Todd interviewed Kaine four times on Meet the Press in 2016 and 2017 with no disclaimer of his wife's 2012 donation. He also skipped over any disclaimer in an October 17, 2017 MTP Daily interview on MSNBC. He is clearly in the camp of "whatever my wife does has nothing to do with the perception of my work."

Other House candidates Denny Todd supported were non-incumbents: $1,000 to Doug Chin in Hawaii, $500 to Pete D'Alessandro (a Bernie bro) in Iowa, $500 to Jennifer Sarver in Texas, and $350 to Laura Moser in Texas, who lost her primary. Denny Todd was listed on Facebook as a co-captain of a 2017 Moser fundraiser in Washington, DC.

In the bruising world of politics, Susan Platt is not afraid to wrangle with the men.

While managing now-Rep. Don Beyer’s campaign for governor in 1997, a news report quoting anonymous sources said Platt went on a “profanity-laced tirade” during a feud with other Democratic officials.