Mrs. Jimmy Kimmel: I Said 'What The F***?' to Stop Hillary Pantsuit Jokes

The August issue of the women's magazine Glamour is the Comedy Issue, so they rounded up female comedy writers for all the liberal late-night shows to address diversity in the writers' room and how feminism pervades the late-night scene. Molly McNearney, Jimmy Kimmel's wife and head writer, unleashed on the idea of Hillary pantsuit jokes during the campaign: 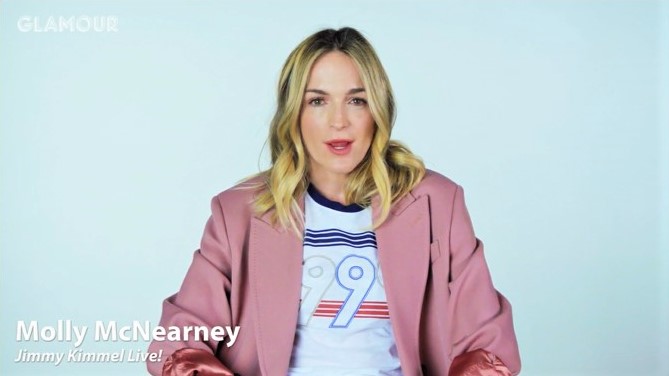 MOLLY McNEARNEY: I remember when Hillary was coming on a year ago, people were still making pantsuit jokes. I was like, “What the fuck are you doing? You’re minimizing this woman to her clothes?” We’d never talk about a man’s outfit. Everyone heard me and they did cut it, but there is learning to be had. These men don’t know, ya know? So it’s our responsibility to teach them. In the same way, I would hope that we’d all be open to learning about things that might offend straight white guys! [All laugh.]

PIA GLENN, The Opposition with Jordan Klepper: I am totally fine offending them.

Ha ha ha. That was the article's end. Mocking the straight white guys, tying it up with a bow. Kimmel can mock the First Lady's accent or Ivanka's clothing line. Feminists are fine with that.

McNearney also said that since the star is her husband, he is "uniquely qualified to amplify' her voice (read: liberal activism), like the appeal for Obamacare after her infant son needed heart surgery: "Jimmy allowed me to tell a story that I never could have. I was feeling those same things but didn’t have the strength to go on national television and talk about it. I would have made Jimmy’s crying look like nothing."

The women feel the men are more "woke" and "know to shut up and take it in" when the women are angry, like about Trump:

PIA GLENN: I think about the sexual assault stories that came up and how we talk about it in the room—there’s a visceral anger that comes up when the women speak about it. And the guys know to shut up and take it in.

KAT RADLEY, The Daily Show with Trevor Noah: Trevor always asks questions, like with the Harvey and Me Too stuff. He’d ask if the approach was right, if we wanted to lead the discussion.

ARIEL DUMAS, The Late Show with Stephen Colbert: Same with Stephen. He is so attuned to the hypocrisy women experience. Like how the Trump administration is pushing “abstinence education” by teaching women sex-­​refusal techniques. Stephen lost his mind and just let me riff around Trump’s 19 accusers and how he was helping them learn sex-refusal techniques with a real hands-on approach.

Jordan Klepper's writer proclaimed he could be "extremely white" and still sound like a black woman against Trump:

PIA GLENN: Jordan absolutely amplifies my voice in terms of point of view, because I am such an advocate for black female representation, and in the comedy world [makes sad trumpet noise]. So, much of the time, even as filtered through this extremely white man, I can take credit for our angle on Trump’s America or dog whistles about racism. It might not sound like my voice coming out of his mouth, but it definitely is.

It's also fun that all this "wokeness" happens in Glamour, next to the fashion captions for the comedy writers: "Jasmine is wearing the $485 Maison Kitsune sweater and the $675 Paul Andrew shoes."