NPR Weekend Edition Saturday welcomed Parkland student leftist David Hogg for an interview, and host Scott Simon offered the typical "how are you coping" and "do you have time to be a teenager" softballs. But when he teed up Hogg to say something political, Hogg was obnoxious. First, he insisted "oftentimes" cops discriminate against people of color: 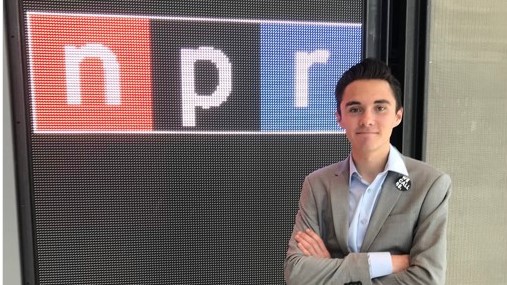 DAVID HOGG: I think it's important to realize that law enforcement does do a very good job oftentimes of trying to ensure the safety and security of their people. But oftentimes, where they fail in communities of color and in lower socioeconomic status communities where they discriminate against these people. For instance, even in our schools. When we have more of these law enforcement officers come in, yes, they're going to help secure more students. But do we really want to turn our schools into a place where we have to have police officers and basically create a war zone?

But Hogg really devolved into his usual mudslinging when asked if he was too young to speak out. The arrogant "we are the future and we will write the history" answer came out, complete with the "our old opponents will die off and then we win."

SIMON: Mr. Hogg, what do you say to people who who say, look - these are a very admirable young people, but they are young people? And that's not how society works or should work. We ought to see a little of life before we start taking their prescriptions for what we ought to do.

HOGG: To those people I would say, I think we've seen a little of life, considering we saw the slaughter of 17 people at our school. Having to see these things again and again is more than enough life experience than we've ever wanted to have. I think saying that students don't have a right to speak out against this is disgusting because we've lived through this. Regardless of what your opinions are or where you come from, you need to realize we are the future of America. And if you choose not to stand with us, that's OK because you'll be on the wrong side of the history textbooks that we write. But if you choose to stand with us, you will be praised as standing up with the future of America. Because at the end of the day, what our generation is fighting for - not only for us, not only for the kids that are alive right now but the future of America. We can and we will outlive our opponents because they're old, and they are stuck in their old ways. We will change the face of America with or without our opponents.

After that sliming, Simon could only follow up: "Do you have time to be a teenager?" Because NPR claims to be about civility, but not when conservatives are getting slimed. For that, Hogg tweeted out they were a "great news organization."