The front page of Sunday’s Los Angeles Times looked like a perfect example of curated liberal bias. The dominant story on the top left was an outraged editorial from columnist Steve Lopez, on homelessness in the city. “CEASELESS CRISIS,” it screamed. Lopez documented the problem on the ground: 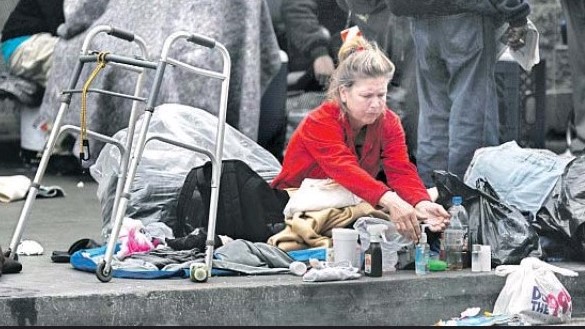 On skid row, this is the norm, and it has been for years. On a recent day, it was not possible to walk on the sidewalk in the one-block stretch of 6th Street between San Julian and Wall streets. Rows of tents and blue tarp shanties lined the entire stretch, extending all the way to the curb, so you had to walk in the street.

I spent quite a bit of time in this area 13 years ago, when Orr and I first covered skid row and the thousands of homeless people who lived there. Back then, I never got past a sense of disbelief that this could exist, without an immediate crisis response, a few blocks from the halls of power and the towers of success.

At least there was no mention of President Trump.

Next to that was another article on homelessness, “Blazes on skid row stir call for action.” Reporter Dakota Smith found “Homeless-encampment fires are endangering human lives and businesses in skid row, community leaders say. The fires start when homeless residents cook, try to keep warm or use drugs. Other blazes are intentionally set.”

At the bottom left came the Olympics feature: “Cloudy future became rainbow: Skier came out as gay in 2015, and to his surprise he became more popular.” Reporter David Wharton gushed over how Gus Kenworthy found the world has changed in the culture of sport:

Teammates and competitors rallied around him. So did corporations such as Visa, Toyota and Procter & Gamble, stepping forward with endorsement deals heading into the 2018 Winter Olympics. If anything, coming out made Kenworthy more popular -- and marketable.

"What brands like Procter & Gamble need to sell soap is an emotional connection," says Andy Rohm, a marketing professor at Loyola Marymount. "They need people with real stories to make their products stand out."

It now seems inevitable that a chapter would take place in Las Vegas, land of the improbable becoming possible -- and anything seems possible in politics these days.

This saga may crescendo on Tuesday, when President Trump delivers the State of the Union address and a Daniels interview with Jimmy Kimmel airs later that night. A denouement in tweets is always a possibility.

The Times relied on a Wall Street Journal report that Daniels was paid $130,000 by a Trump lawyer in the last weeks of the 2016 campaign about an alleged affair from ten years earlier, shortly after Melania Trump gave birth to his son Barron.