The front page of Sunday’s Washington Post was dominated by a mockery of conservatives for feeling – accurately – that higher education in America is cultural territory fiercely held by the Left. Post husband-and-wife duo Kevin Sullivan and Mary Jordan wrote a piece with the headline “On elitists, ‘crybabies,’ and ‘junky’ degrees: A Trump backer details conservatives’ anger at American universities and their students.”

The Post detailed the anger of a former Arizona state senator named Frank Antenori, beginning their story with how Antenori "shot the head off a rattlesnake at his back door last summer -- a deadeye pistol blast from 20 feet. No college professor taught him that." The U.S. Army did.

But their reporters and editors weren’t really interested in the conservative argument, at least beyond reporting that the Pew Research Center took a poll and found only 36 percent of Republicans feel “colleges and universities have a positive effect on the way things are going in the country.” Pew found that Republican number dropped 18 points from 2015 – ergo, it’s Trump’s fault.

Or, perhaps, this can be blamed on conservative websites like Campus Reform. Antenori – the one attacking the “crybabies” and the “junky” humanities degrees – reads it [Image via Campus Reform]: 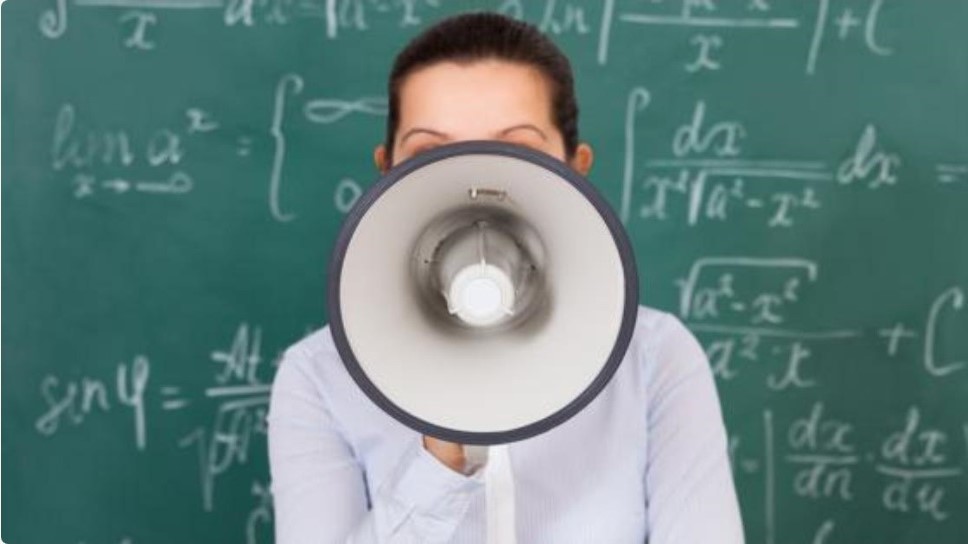 The Antenoris did not steer their two sons, 23 and 22, toward college, and neither went. One helps at home on the ranch, and the other is enlisted in the Army.

Antenori is just as happy his sons aren’t hanging out with the “weirdos” he reads about on Campus Reform, a conservative website with a network of college reporters whose stated mission is to expose “liberal bias and abuse on America’s campuses.”

In a sign of the intensely partisan climate on campus, its recent headlines include: “Prof wants ‘body size’ added to diversity curricula,” “Students cover free speech wall with vulgar anti-Trump graffiti” and “College Dems leader resigns after declaring hatred of white men.” [Links not in the original Post piece.]

That was it – the only evidence allowed of actual "liberal bias and abuse" and political correctness on campus. Conservatives might have expected more as CNN's Brian Stelter promoted this story in his ardor to call out the conservative media for overdoing things: 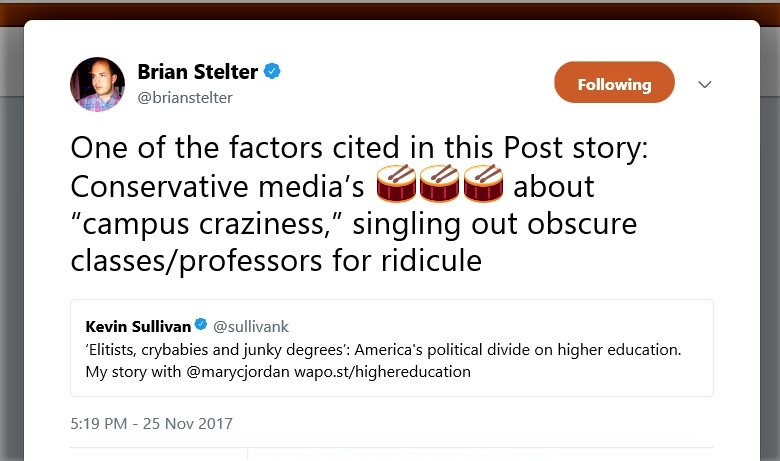 The headline inside on page A-8, where the entire page is taken up the story is “What is wrong with colleges in America, as many on the right see it.” But a big chunk of the column is a rebuttal from Antenori’s former colleague in the state Senate, Democrat Steve Farley:

The views of many conservatives are being fanned by Trump, he said, including a vilification of universities that is “corrosive to our democracy and our society in general.”

In 1990, according to survey data by the Higher Education Research Institute (HERI) at UCLA, 42 percent of professors identified as "liberal" or "far-left." By 2014, that number had jumped to 60 percent.

Over the same period, the number of academics identifying as "moderate" fell by 13 percentage points, and the share of "conservative" and "far-right" professors dropped nearly six points. In the academy, liberals now outnumber conservatives by roughly 5 to 1.

But Farley's complaint echoes Sullivan and Jordan’s main point: “Antenori is part of an increasingly vocal campaign to transform higher education in America. Though U.S. universities are envied around the world, he and other conservatives want to reduce the flow of government cash to what they see as elitist, politically correct institutions that often fail to provide practical skills for the job market.”

The Post reporters didn't wonder how much $44 million sounds like a drop in the bucket as they lament state funding for higher education has declined by $5.7 billion from 2008 levels. They warn that funding in Arizona "now spends $3,500 less per year on every student, according to the progressive Center for Budget and Policy Priorities." They're mocking the idea of liberal bias on campus, as they use "progressive" think tanks for statistics.

Sullivan and Jordan summarized this conspiracy as a sort of Revenge of the Uneducated: “Hillary Clinton trounced Trump in the nation’s most educated counties, but Trump won white voters without a college degree by 37 points.”