Will ABC and CNN Apologize to ‘Conspiracy-Loving’ Mark Levin on Trump-Team Surveillance?

CNN dropped a bombshell on Monday night that “US investigators wiretapped former Trump campaign chairman Paul Manafort under secret court orders before and after the election...The government snooping continued into early this year, including a period when Manafort was known to talk to President Donald Trump.”

This means there are some major-media reporters who should apologize to conservatives who asked questions about Trump-team surveillance. In March, ABC’s Brian Ross repeatedly denounced Mark Levin as a “conspiracy-loving talk show host” (a la Alex Jones) over three days of newscasts. 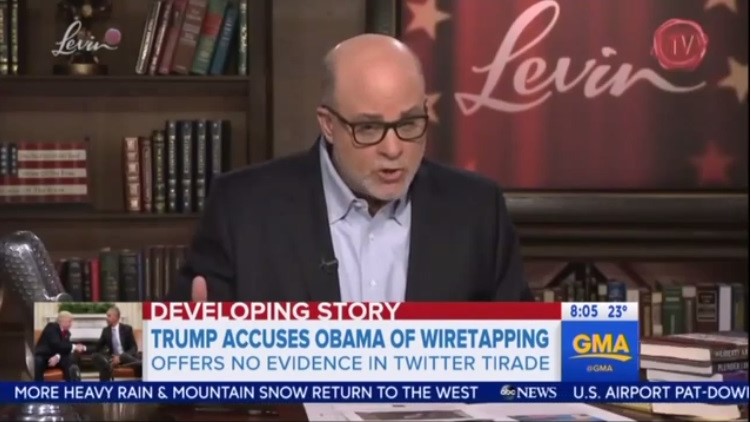 BRIAN ROSS: Because the President cited no proof, it is not clear tonight whether he based his allegations on a top secret White House briefing or whether it came from reading an article on the conservative Breitbart website, posted Friday, that detailed speculation from a conspiracy-loving talk show host, Mark Levin.

MARK LEVIN: How many of Trump's people were eavesdropped on? How many had their conversations intercepted, recorded, transcribed? Because this, ladies and gentlemen, is the big scandal.”

HBO comedian John Oliver, a liberal darling, ran this clip on his show, then added: “I think we can officially declare that Trump has a worse media diet than the Son of Sam killer, and he got all his news from a talking dog who told him to murder.”

If Oliver was as careful about facts as his liberal friends insist, he should also get Levin on the phone and apologize.

An incendiary idea first put forward by right-wing radio host Mark Levin is now burning across Washington, fanned by President Trump's tweets and a huge number of supportive commentators and websites -- even though the facts don't back up the conclusion....

Levin's original idea, advanced on Thursday, was that former President Barack Obama and his allies have mounted a "silent coup" against Trump using "police state" tactics. Levin cherry-picked news stories that supported his thesis and omitted information that cut against it.

The rest of us could look at the endless hours of CNN Russiagate coverage, speculating on what they might find, and calling it "Birth of a conspiracy theory" or "Uncorking of an incendiary idea." Investigative reporting asks questions, and seeks answers. But the tone of Ross and Stelter seems designed to intimidate people from seeking answers down "murky" avenues they don't want anyone to travel.

When Levin challenged Stelter in an open letter to deny the government had won FISA warrants to surveill Manafort and others, Stelter replied "I don't know. You don't know. The reporting is very murky." Well, it's not as murky now, is it? It's not like Stelter would suggest CNN was a pile of "conspiracy theorists" tossing out "incendiary ideas," would he?

There's a much bigger scandal here: We have a prior administration – Barack Obama and his surrogates – who are supporting Hillary Clinton and her party, the Democratic Party. Who were using the ... intelligence activities to surveil members of the Trump campaign, and to put that information out in the public. Those are police state tactics. Nothing Flynn or Sessions has done is even in the same category as that...

CNN isn't reporting a conservative spin on the Manafort wiretaps to allege that the Obama administration was surveilling Trump to get him defeated. But they are trying to clarify how and when Manafort & Co. were being probed, even if the picture isn't yet perfectly clear:

It is unclear when the new warrant started. The FBI interest deepened last fall because of intercepted communications between Manafort and suspected Russian operatives, and among the Russians themselves, that reignited their interest in Manafort, the sources told CNN. As part of the FISA warrant, CNN has learned that earlier this year, the FBI conducted a search of a storage facility belonging to Manafort. It's not known what they found.

The conversations between Manafort and Trump continued after the President took office, long after the FBI investigation into Manafort was publicly known, the sources told CNN. They went on until lawyers for the President and Manafort insisted that they stop, according to the sources.

CNN warned "It's unclear whether Trump himself was picked up on the surveillance," but CNN's Pamela Brown -- one of the three bylines on this article -- acknowledged to Don Lemon on Monday night that it's possible.