In the CNN Money piece entitled “Birth of a conspiracy theory: How Trump's wiretap claim got started,” Stelter wrote:

An incendiary idea first put forward by right-wing radio host Mark Levin is now burning across Washington, fanned by President Trump's tweets and a huge number of supportive commentators and websites -- even though the facts don't back up the conclusion.

Levin's original idea, advanced on Thursday, was that former President Barack Obama and his allies have mounted a "silent coup" against Trump using "police state" tactics. Levin cherry-picked news stories that supported his thesis and omitted information that cut against it.

Right from the beginning of Levin’s letter, the conservative author conveyed his distaste with Stelter’s characterization of him:

Did you listen to my show on Thursday, before President Trump tweeted? Did you watch my appearance on Fox and Friends Sunday morning? I know you are ticked I did not appear on your show, despite your numerous requests. Your ad hominem attacks about "right wing" radio host and conspiracy theory stuff … incredible.

Levin explained that he “simply put together the stories that YOUR profession reported, on the public record” with two FISA applications to the Foreign Intelligence Surveillance Court on this topic of Trump that have the potential to be rather damning.

“The fact that we cannot discern all the details because of the secrecy, except for what the media have revealed and selective leaks by the government, should cause you to want to know more, not to trash those who point it out,” Levin added.

The CRTV host went onto to note that a statement from former President Barack Obama “is not a definitive statement of anything, other than he, personally, did not order a wiretap, which I never claimed...But that does not mean he was unaware of surveillance activity by several of his departments.”

Despite having problems with telling Congress Congress the truth, Levin pointed out that, strangely, former intelligence official James Clapper was able to ascertain that the intelligence community has found “no connections between the Russians and the Trump campaign.”

I am extremely critical of Russia, Putin, and the efforts to influence our election, although I do not believe they succeeded. That said, how would Clapper know of no connections if he, as former Director of National Intelligence, didn't look? On what is that based?

“Your lack of curiosity and dishonesty about such matters and in dealing with me demean you and your profession. You are free to circulate this communication to whomever you wish, as I am making it public,” Levin concluded.

Stelter offered a number of tweets responding to Levin, with one touting a link to his original piece: 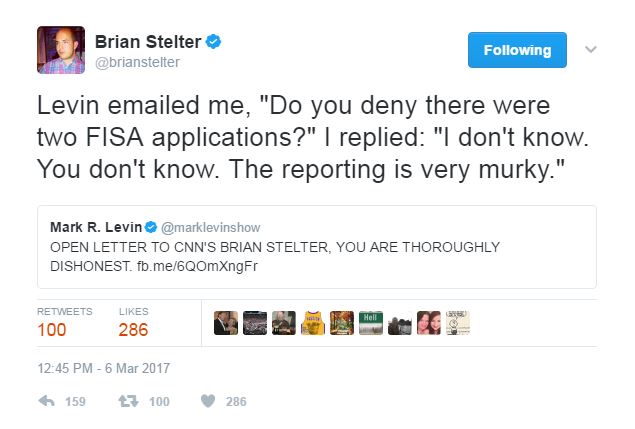 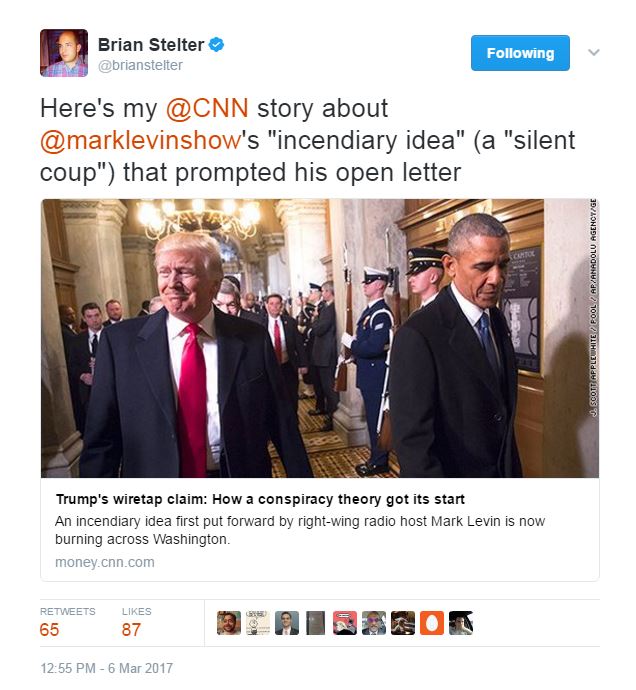 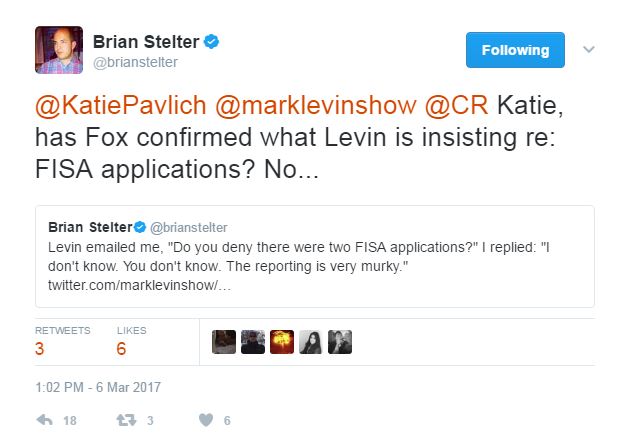 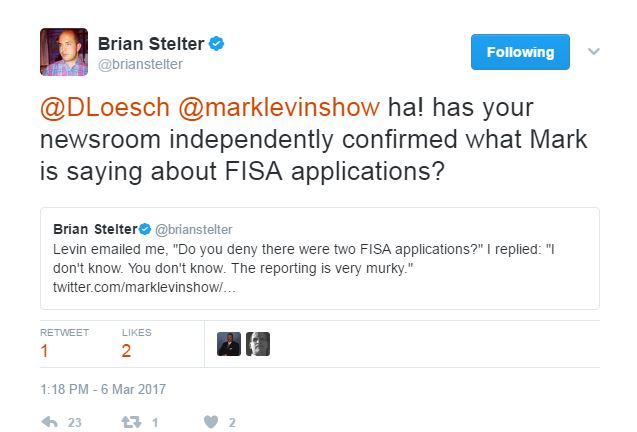