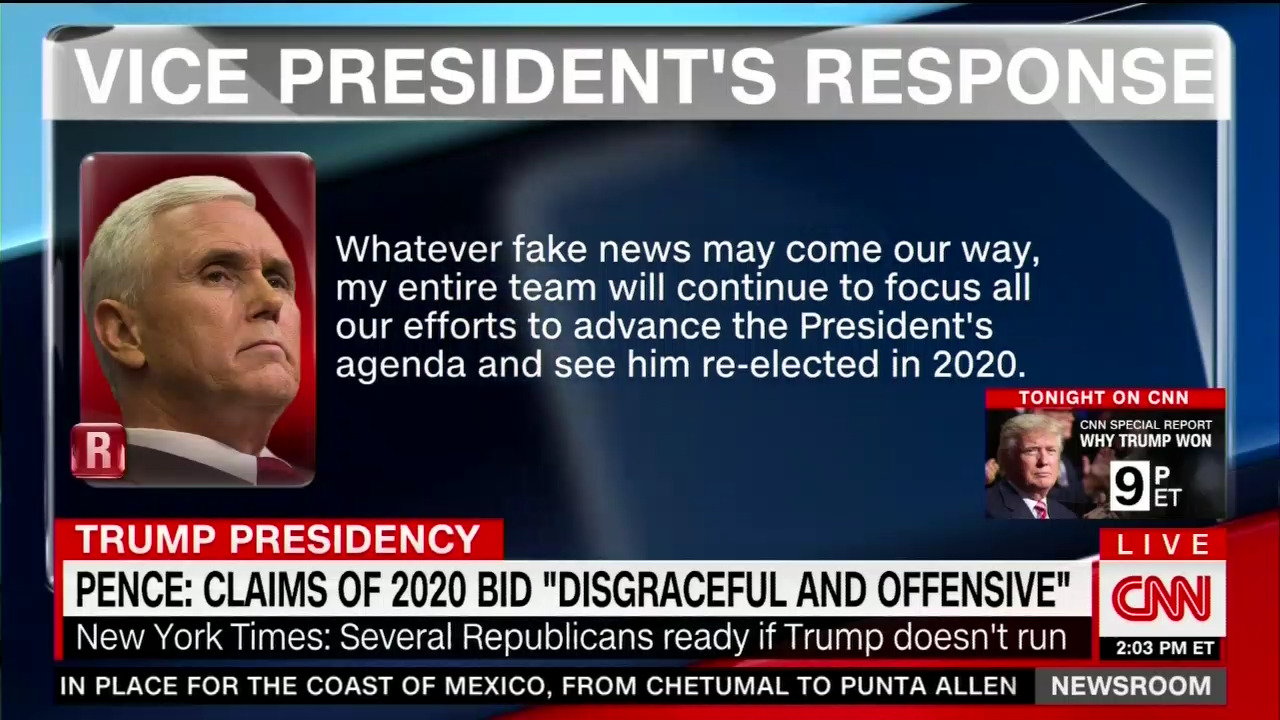 Reporters Jonathan Martin and Alexander Burns wildly speculated in the first paragraph that “Mike Pence’s schedule is so full of political events that he is acting more like a second-term vice president hoping to clear the field than a No. 2 sworn in a little over six months ago.”

If a conservative news outlet in 1993 had trotted out the idea that after an uncertain first six months for Bill Clinton, Vice President Gore was “acting like” he wanted to run for president in 1996, the liberal media elite would have denounced it as  crackpot conspiracy-theory material. But since Trump is guilty of what the Times calls “sheer disarray” in the wake of all the liberal media's Russia-may-have-colluded coverage, this Times exercise is treated as “news” reporting.

The Times knows that Trump doesn’t like disloyalty or anyone stealing his spotlight, so they are making trouble for Pence, plain and simple. “Chaos” and “disarray” and Republican in-fighting is exactly what they want as badly disguised Democrats.

“Today’s article in the New York Times is disgraceful and offensive to me, my family, and our entire team. The allegations in this article are categorically false and represent just the latest attempt by the media to divide this Administration,” Pence said in a statement on Sunday. “Whatever fake news may come our way, my entire team will continue to focus all our efforts to advance the President’s agenda and see him re-elected in 2020. Any suggestion otherwise is both laughable and absurd.”

The Times reporters insist that the sheer volume of their phone calls makes their guesswork “news.”

But in interviews with more than 75 Republicans at every level of the party, elected officials, donors and strategists expressed widespread uncertainty about whether Mr. Trump would be on the ballot in 2020 and little doubt that others in the party are engaged in barely veiled contingency planning.

“They see weakness in this president,” said Senator John McCain, Republican of Arizona. “Look, it’s not a nice business we’re in.”

A political reporter can read some tea leaves in this article. Pence hired a “sharp-elbowed” political operative, Nick Ayers, as his chief of staff. Pence has a political action committee. He’s made those GOP speeches around the country, as if that were shocking for a sitting vice president. But a lot of this is the usual anonymously-sourced gunk, that  “multiple advisers to Mr. Pence have already intimated to party donors that he would plan to run if Mr. Trump did not.”

This passage sort of nails what’s wrong with this crystal-ball approach:

Mr. Pence’s aides, however, have been less restrained in private, according to two people briefed on the conversations. In a June meeting with Al Hubbard, an Indiana Republican who was a top economic official in Mr. Bush’s White House, an aide to the vice president, Marty Obst, said that they wanted to be prepared to run in case there was an opening in 2020 and that Mr. Pence would need Mr. Hubbard’s help, according to a Republican briefed on the meeting. Reached on the phone, Mr. Hubbard declined to comment.

Mr. Ayers has signaled to multiple major Republican donors that Mr. Pence wants to be ready.

Mr. Obst denied that he and Mr. Ayers had made any private insinuations and called suggestions that the vice president was positioning himself for 2020 “beyond ridiculous.”

Anonymous sources spin a theory, and on-the-record sources denounce it as absurd...and in the world of the media elite, that can only mean that the anonymous sources have the Pence folks on the ropes, not that the Times is publishing badly sourced rubbish. What really matters to the media is that they paint black clouds over the president, that the narrative needle is firmly stuck on "beleaguered."

There are unintentional knee-slappers in this piece, especially this one:

In the wider world of conservative Trump opponents, William Kristol, editor at large of The Weekly Standard, said he had begun informal conversations about creating a “Committee Not to Renominate the President.”

“We need to take one shot at liberating the Republican Party from Trump, and conservatism from Trumpism,” Mr. Kristol said.

Haven't the politically savvy Times reporters noticed that Kristol took more than "one shot" in the last campaign to find a conservative alternative who would beat Trump? Remember the David French Connection? And they forgot Kristol ended up with Evan McMullin and his 0.5 percent of the national vote?