Reince Priebus Still on the Job: The Fake News of a White House Shakeup 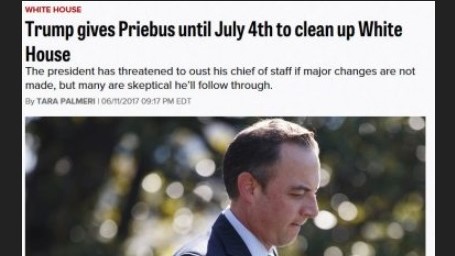 Our friend Paul Bedard at the Washington Examiner underlined how the media turned out to be wrong again -- projecting that chief of staff Reince Priebus would be bounced from the White House. Bedard cited a June Politico report headlined "Trump gives Priebus until July 4th to clean up White House," noting "That story was picked up by dozens of media outlets."

"The same folks who called the election wrong are calling this presidency wrong," said a Trump aide.

Politico, using the usual anonymous "experts," claimed two insiders and three outsiders confirmed the shake-up rumors, "though it also included some wiggle room in suggesting Trump may not pull the trigger." In the meantime, Politico has some clickbait. That would be "fake news" if it came from overseas.

"I've lost count how many times the 'news' media have reported the imminent political death of Reince Priebus. Mark Twain could relate to him."

Bozell added, "They've declared so many people fired at the White House, I'm surprised there's anyone left over there."

The only departures have been national security adviser Mike Flynn (after he lied to Vice President Mike Pence) and communications director Mike Dubke. CNN's Chris Cillizza tried to make that sound momentous -- despite admitting Dubke was barely known.

David Rutz of the Washington Free Beacon, winner of our Noel Sheppard Award for media blogging, put more meat on that fake-news bone by citing other examples of this trend:

-- On April 7, Axios reporter Mike Allen reported that "President Trump is considering a broad shakeup of his White House" that could include replacing Priebus and chief strategist Steve Bannon, according to "aides and advisers." Naturally, he hedged that it might not happen. But click, click, click.

-- On May 14, Allen reported again on a coming shakeup that could include booting Priebus. At the urging of longtime friends and advisers of Trump, Allen wrote, the president was considering a "huge reboot" that could result in firing Priebus, Bannon, and press secretary Sean Spicer. Click, click, click.

-- In a New York Times report from May 12, the name of Reince Priebus was listed in another story about a potential White House shakeup. Trump had grown "increasingly dissatisfied" with the chief of staff's job performance, the story said, which added that Trump had considered replacing Spicer as press secretary with Fox News personality Kimberly Guilfoyle. Spicer has been phased out of his lead spokesman role, but Guilfoyle stayed with Fox News.

-- Then the New York Times reported on May 30 about Trump's open discussion about "shaking it up" inside his White House and removing Priebus. The Times wrote that Trump had joked with Priebus about making him the ambassador to Greece.

-- NBC News reported on May 31 that Trump was "actively seeking advice about a shakeup that could envelop his chief of staff, Reince Priebus." The report said, however, that one administration source "flatly denies" the former RNC chairman's job was at risk.

-- Politico cited anonymous claims offered by Erick Erickson in a June 5 article headlined, "How Reince Priebus hangs on," describing how the piece was indicative of a media narrative that he is a "dead man walking, according to senior White House officials, advisers, and others close to the president." However, the same story contributed to that narrative by saying interviews with a "dozen" administration officials suggested he would not stay chief of staff for long. Another "friend" of Trump told the outlet that "it's basically decided that Reince is gone" and was just a matter of when.

"When" is definitely not yet. For now, it's still fake news. If these outlets want to claim they've been duped by White House aides, then what does that say about their journalistic skepticism? Or does the skepticism yield to the clickbait temptations?