CNN's 'Massive' Error on Russia? No Time For It on 'Reliable Sources' 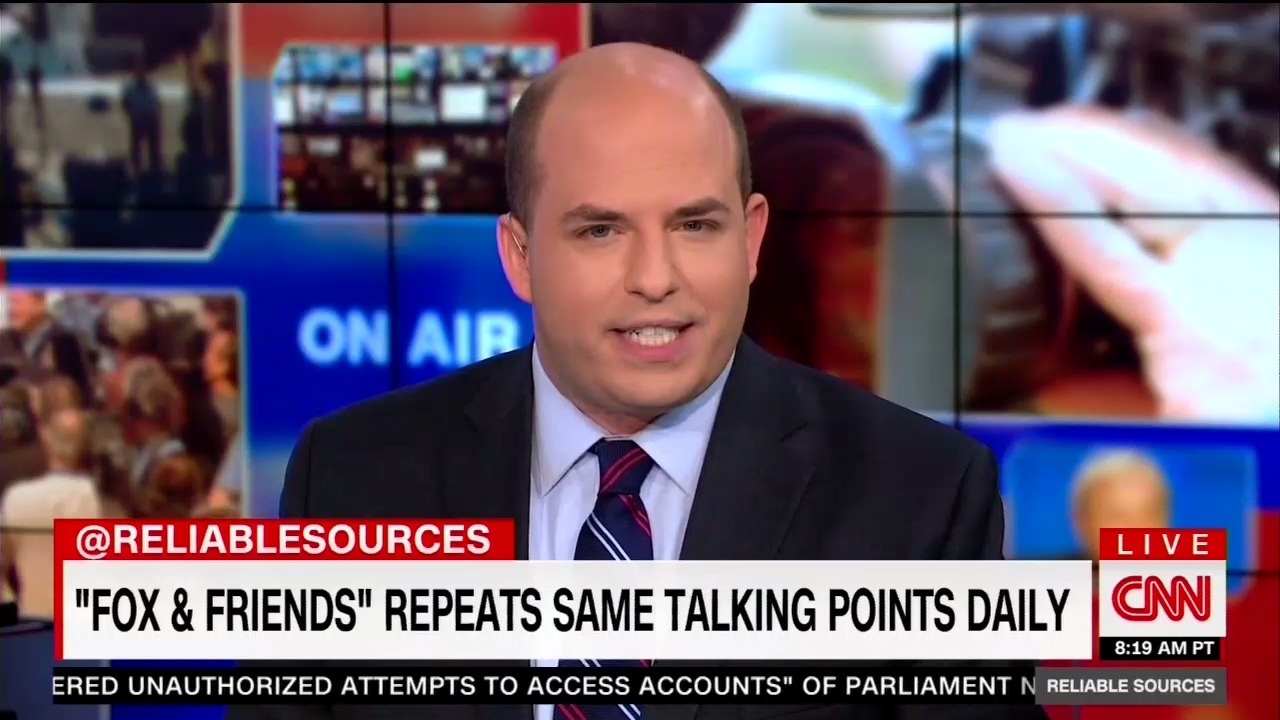 CNN's media unit has an enormous black hole in its review of the media world: CNN. On Friday, CNN retracted an online story making unsubstantiated claims about the Russian ties of Trump adviser Anthony Scaramucci. Jon Passantino at Buzzfeed reported on Sunday a crackdown on CNN reporting on Russia to prevent future mistakes.

So how much time did Stelter have for this story on his show Reliable Sources on Sunday? Nothing. Instead, Stelter spent more than five minutes hate-analyzing Fox & Friends as a Trump infomercial. He spent about ten and a half minutes indulging "TV legend" Phil Donahue. He even closed the show with four minutes allegedly about Russia -- but his guest Masha Gessen basically fed back Stelter his favorite talking point that Trump is an "aspiring autocrat" who's shutting down access to the press: "We're definitely hurtling towards a closed system of government..."

CNN is imposing strict new publishing restrictions for online articles involving Russia after the network deleted a story and then issued a retraction late Friday, according to an internal email obtained by BuzzFeed News.

The email went out at 11:21 a.m. on Saturday from Rich Barbieri, the CNNMoney executive editor, saying "No one should publish any content involving Russia without coming to me and Jason [Farkas]," a CNN vice president.

"This applied to social, video, editorial, and MoneyStream. No exceptions," the email added. "I will lay out a workflow Monday."

The new restrictions also apply to other areas of the network — not just CNNMoney, which wasn't involved with the article that was deleted and retracted.

A source close to the network, who requested anonymity to discuss the matter, told BuzzFeed News earlier that the story was a "massive, massive f---up and people will be disciplined." [Emphasis mine.] The person said CNN Worldwide President Jeff Zucker and the head of the company's human resources department are "directly involved" in an internal investigation examining how the story was handled.

It's not like Stelter was unaware of the CNN retraction. He tweeted that on Saturday morning: 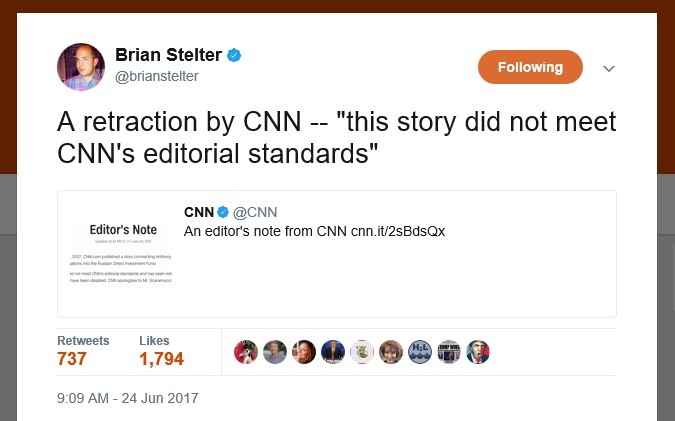 On Sunday night in his e-mail newsletter, Stelter spent about 230 words on the "massive" mess-up:

On Friday evening CNN.com fully retracted a story after questions were raised about the accuracy of the reporting and sourcing. The story, by Thomas Frank of the investigative unit, said Congress was investigating a "Russian investment fund with ties to Trump officials." It didn't get TV airtime, but it was shared on the web, where it was spotted and scrutinized by Breitbart.
On Friday night the story was replaced by an editor’s note: "That story did not meet CNN's editorial standards and has been retracted. Links to the story have been disabled." The editor's note included an apology to Trump ally Anthony Scaramucci, who was named in the story. The next morning Scaramucci responded via Twitter: "CNN did the right thing. Classy move. Apology accepted. Everyone makes mistakes. Moving on." Some prominent conservative figures, like Donald Trump Jr. and Sean Hannity, seized on the story as an example of anti-Trump bias and anonymous source malfeasance...
An embarrassing moment for CNN
The truth is, there's still a lot we don't know. On Saturday and Sunday I asked CNN PR for details and comment. A network spokeswoman declined to comment as of Sunday evening.
-- My take: I sometimes complain to my editors about the layers of editing and oversight that exist at CNN. But these processes exist for good reasons. Determining what went wrong this time will help prevent future damage to the news organization... [Emphasis in the original.]