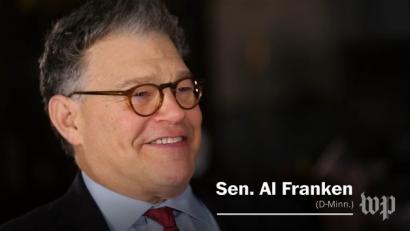 To underline how The Washington Post is a Democratic Party newspaper, the Sunday edition has a front-page puff piece on Sen. Al Franken. “Franken takes a judicious approach,” reads the newspaper headline. Online, the love is more palpable: “Al Franken may be the perfect senator for the Trump era — a deadly serious funnyman.”

Post reporter Karen Tumulty relates how the former comedian is now super-serious, as he obsesses over “torrefaction” and “loan guarantees for Native American reservations," and then the theme arrives:

At the dawn of a presidency that stretches the limits of late-night parody, and at a moment when an out-of-power Democratic Party is trying to find its voice, the former comedian and satirist may be having a breakout moment as a political star.

Of course, she had to employ an old Franken Saturday Night Live character (Stuart Smalley) to keep the story light:

The Minnesota senator spent the last eight years proving that he’s good enough, smart enough, and doggone it, people like him. (Don’t groan. Reporters who write about him should be allowed the indulgence of using at least one of his signature lines from SNL.)

Tumulty is not the first journalist to look to Al Franken as their reassuring port in a political storm. The Post is also doubling down on their own work, how they helped make Franken more prominent by highlighting an exchange he had with Attorney General Jeff Sessions where Sessions denied meeting the Russians as a campaign surrogate, which led to Sessions recusing himself from an investigation of Russians “hacking the election.”

But there is no serious attempt at bringing critics to bear on Franken’s record, just some disdain late in the piece from Sen. Ted Cruz, clearly not a result of Tumulty calling Cruz directly. Instead, readers are “treated” to the gush of Franken pal Norm Ornstein, who conservatives remember as the guy who insisted conservatives rejected all facts and science:

Franken “had an instinct for the legislative process, but the one talent that surprised me a little bit beyond that was his talent for cross-examination,” said political scientist Norman Ornstein, a close friend. “He has that Perry Mason quality.”

Franken brings a set of skills for navigating the wilderness they are in, Ornstein said. “It’s clear they need focused champions who can use the tools available to the minority to make points and frame issues and put people on the defensive and unmask things that need to be unmasked.”

​Ornstein means, for example, the liberal conceit that Betsy DeVos is unqualified to be Education Secretary because she favors school choice. He's praising Franken for being a partisan Democrat, despite his previous poses against political combat.

Tumulty even joins the liberal chorus who chatter about Al Franken running for President, without really wondering about the skeletons in Franken's SNL closet. Then there's the lying and meanness in his books.