Our friend Brent Scher at the Washington Free Beacon noted that the New York Times editorial board has a funny double standard on recounts: North Carolina’s Republican governor Pat McCrory is a pathetic whiner to contest the results, but recounts for Hillary don’t require comment...except for a Monday grumblefest titled “Donald Trump’s Lies About the Popular Vote.”

“There is no evidence of illegal voting on even a small scale anywhere in the country, let alone a systematic conspiracy involving ‘millions,'” wrote the editorial board in Monday’s paper, denying media reports of fraud in Virginia and Colorado, to name two states. “In addition to insulting law-abiding voters everywhere, these lies about fraud threaten the foundations of American democracy.”

Green Party presidential nominee Jill Stein’s demand for presidential recounts in three states will cost millions of dollars for no effect, but the Times demonstrated in Thursday's paper it was more upset about the man they call “North Carolina’s Sore Loser”: 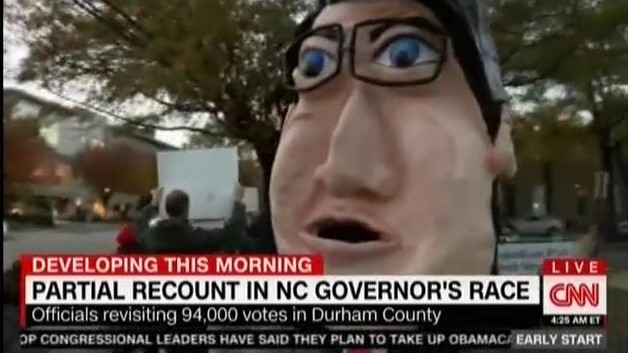 Mr. McCrory, a governor who brought disgrace and financial loss to his state by championing a bill to discriminate against gay and transgender people, demanded a recount and began scouring voting rolls for evidence of fraud. It was a hard-fought, acrimonious election, decided by a slim margin, but as provisional and absentee ballots were added to the tally in recent days, Mr. Cooper’s lead surpassed the 10,000 threshold that bars Mr. McCrory from requesting a taxpayer-funded recount.

Mr. McCrory has refused to concede, and despite having no path to victory, he has been engaged in an all-out assault on the integrity of the election system. His fight appears likely to serve as rationale for a renewed effort in the legislature to make North Carolina’s voting laws and regulations even more onerous.

They added: “It’s dishonorable for Mr. McCrory to promote voting fraud myths and add fuel to voter suppression efforts as he’s going out the door.”

But Times columnist Gail Collins – a former editor of the paper’s editorial page - quoted Jill Stein telling her over the phone “It’s a healing and positive thing to examine the vote” – when you dislike the winner. Forget the "path to victory." Forget the "assault on election integrity." The headline on the right-hand page on Thursday was "Count Those Votes! Again!"

Collins lamented that Stein would have done much more for Hillary by just removing herself from the ballot:

“Jill Stein is the friend who ruins your wedding but really shows up for you during the divorce,” twittered comedian Morgan Murphy.

But Collins is insisting the recount is positive when it underlines Trump is the lamest winner in modern history:

The one positive effect of the recount, besides reassuring people who worry the Russians might be capable of hacking a massive American vote tally, is the way it reminds the nation, every day, that Donald Trump is one of the least successful successful presidential candidates in American history.

He lost the popular vote to Clinton by more than two million votes. Due to our extremely strange Electoral College system, five men have gotten elected president even though more people voted for their opponent. But no one in modern history has come anywhere near Trump’s ginormous negative accomplishment.

The sour grapes don’t get any sweeter, but that doesn’t mean they aren’t still stomping on them at the Times.