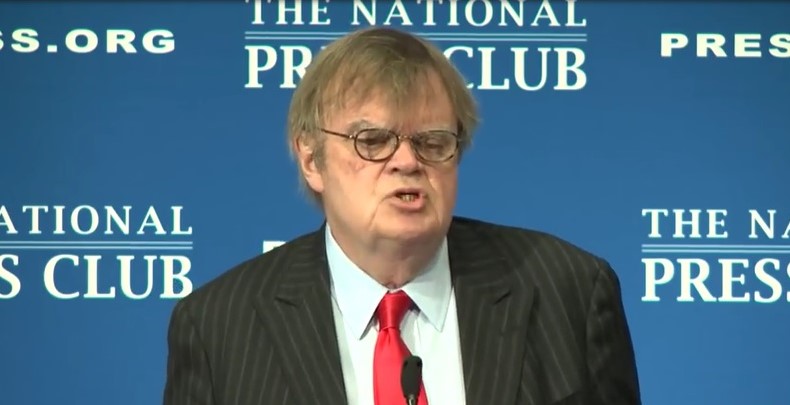 Longtime National Public Radio star Garrison Keillor just finished four decades on state-subsidized radio on A Prairie Home Companion. For almost that long, he's been an easy example of a pretentious liberal snob, precisely the kind who seriously loathes a Donald Trump. If NPR ever wanted to wonder why they haven't been granted a Trump interview, it's because he knows NPR is an elite liberal sandbox for people who congratulate themselves on their marvelous taste and mental acuity.

So when Keillor penned an acidulous character assassination of Trump for the Chicago Tribune, the liberals were very pleased. At Vox.com, they raved "Most pundits who attack Trump denounce him as racist, dangerous, and authoritarian. But Keillor does something that is probably much more likely to get under the billionaire’s skin: He makes him look pathetic."

Keillor's conceit is that Trump is going to lose, and lose badly.

The cap does not look good on you, it's a duffer's cap, and when you come to the microphone, you look like the warm-up guy, the guy who announces the license number of the car left in the parking lot, doors locked, lights on, motor running. The brim shadows your face, which gives a sinister look, as if you'd come to town to announce the closing of the pulp factory. Your eyes look dead and your scowl does not suggest American greatness so much as American indigestion. Your hair is the wrong color: People don't want a president to be that shade of blond. You know that now.

Then comes the snobbery, that Trump's obnoxious show of wealth is overcompensating for never being cool with the Jews:

The New York Times treats you like the village idiot. This is painful for a Queens boy trying to win respect in Manhattan where the Times is the Supreme Liberal Jewish Anglican Arbiter of Who Has The Smarts and What Goes Where. When you came to Manhattan 40 years ago, you discovered that in entertainment, the press, politics, finance, everywhere you went, you ran into Jews, and they are not like you: Jews didn't go in for big yachts and a fleet of aircraft — they showed off by way of philanthropy or by raising brilliant offspring. They sympathized with the civil rights movement. In Queens, blacks were a threat to property values — they belonged in the Bronx, not down the street. To the Times, Queens is Cleveland. Bush league. You are Queens. The casinos were totally Queens, the gold faucets in your triplex, the bragging, the insults, but you wanted to be liked by Those People. You wanted Mike Bloomberg to invite you to dinner at his townhouse. You wanted the Times to run a three-part story about you, that you meditate and are a passionate kayaker and collect 14th-century Islamic mosaics. You wish you were that person but you didn't have the time.

"You didn't have the time" to be an enlightened progressive, haw haw haw. Keillor imagines that Trump is a very unhappy billionaire, and that nobody likes him, nobody who matters:

What the fans don't know is that it's not much fun being a billionaire. You own a lot of big houses and you wander around in them, followed by a waiter, a bartender, a masseuse, three housekeepers, and a concierge, and they probably gossip about you behind your back. Just like nine-tenths of your campaign staff. You're losing and they know it and they're telling mean stories about you to everybody and his brother.

Meanwhile, you keep plugging away. It's the hardest work you've ever done. You walk out in the white cap and you rant for an hour about stuff that means nothing and the fans scream and wave their signs and you wish you could level with them for once and say one true thing: I love you to death and when this is over I will have nothing that I want.

The lefties were thrilled on Twitter, from the Carter-speechwriter intellectuals to the comediennes who couldn't handle college: 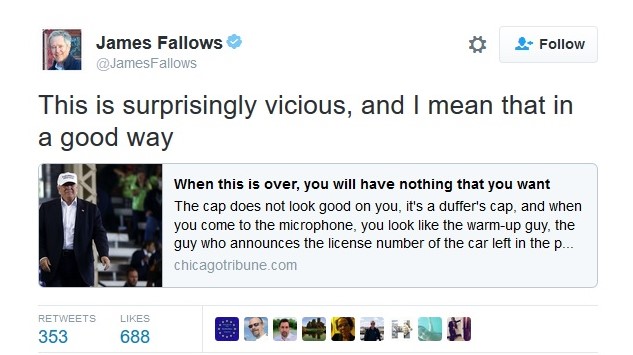 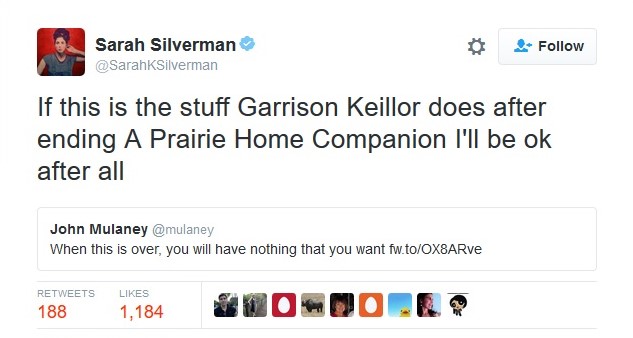