Tony Perkins, president of the Family Research Council, appeared in live PBS/NPR convention coverage on Wednesday night and walked into a barrage of liberal questions designed to shame him and separate him from Donald Trump, who they implied was a terrible Christian. “Conservative” PBS David Brooks not only suggested Trump has no Christian virtues, he told Perkins that social conservatives should sit out the election – obviously making it easier to elect Hillary Clinton.

It’s highly unlikely any leader of a socially liberal group – from the abortion advocates to the LGBT libertines – will be grilled next week in any way like Perkins was grilled on the taxpayer-subsidized public broadcasting airwaves. Brooks unleashed his snark:

DAVID BROOKS: Now Trump has been doing pretty well with evangelicals, Christian social conservatives. So I gotta ask you: which of the Christian virtues do you think Trump best embodies? Is it humility? Grace? Charity? Faithfulness?

PERKINS: I think what it’s come down to is, we were talking about earlier about the reluctance, is that a lot of the evangelicals weren't with Donald Trump in the primary. Some were. But of course, it was a very elastic term, “evangelical” –

IFILL: He likes to point out he won the evangelicals.

PERKINS: Well, he actually did not. He got about 40 percent. Sixty percent did not vote for him. And the term evangelical, when you actially broke it down in the primary, those that went to church on a weekly basis, broke for Ted Cruz.

NPR’s Mara Liasson challenged Perkins on whether “Trump really cares about social issues,” given his liberal take on transgender bathrooms in the culture wars in North Carolina.

PBS pundit Mark Shields wanted Perkins to cry uncle on LGBT issues: “The platform has been called the most pro-life platform ever written for the Republican party by Susan B. Anthony List, among others, and your own judgment -- the mood of the country, there's no doubt about it on the acceptance of gays and lesbians and same-sex marriage has been almost with a velocity unprecedented. Are we fighting the last war, I mean, really?” Perkins argued there was a time when being pro-life seemed very unpopular, but on the gay agenda, “That issue is not going to go away for Republicans.”

That spurred another sharp-tongued inquiry from Brooks: 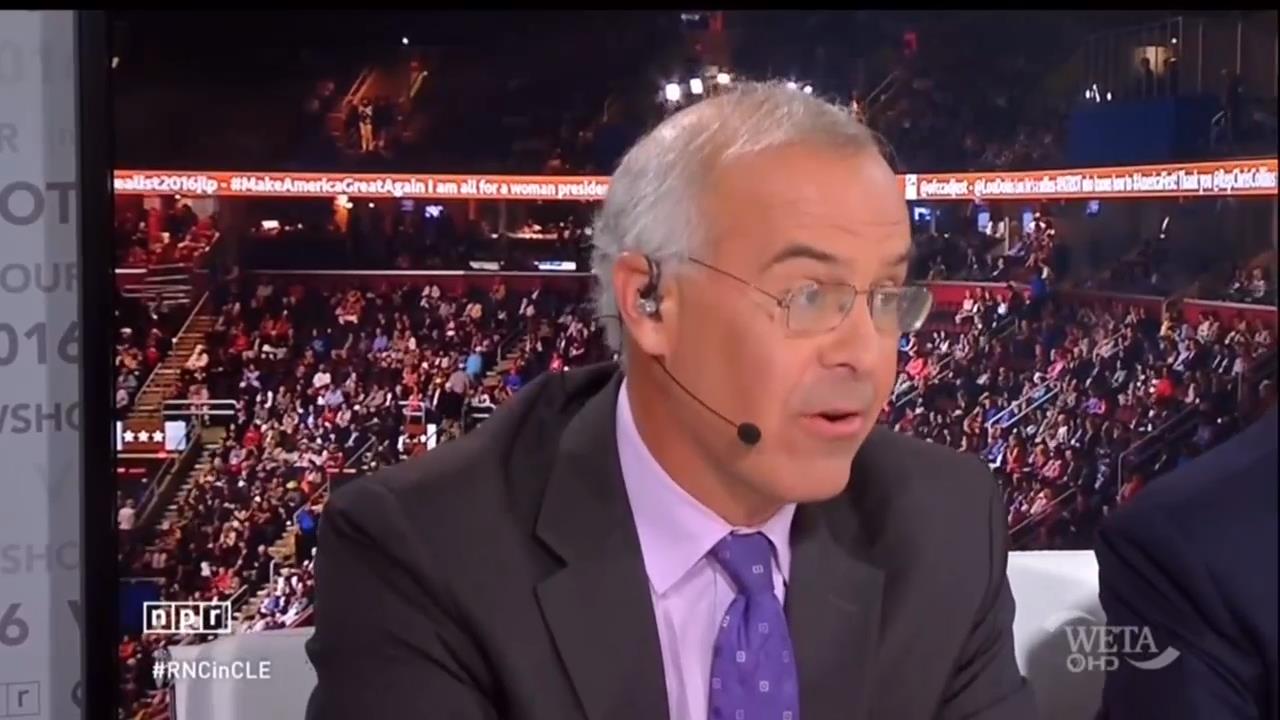 PERKINS: Well, would you suggest to social conservatives that they just stay home and not be involved in the election, given they have two options?

BROOKS: I probably would, as a matter of fact.

PERKINS: Well, I would not!

BROOKS: In the Lewinsky scandal, there was a lot of talk from the Family Research Council and elsewhere that character was a threshhold issue.

PERKINS: There’s no question. But I have two choices before me....

He said he had a choice between Mrs. Clinton, who's obviously a repeat of today's Obama hardline of the culture wars, and Trump, who is at least listening to social conservatives. Raising the Lewinsky scandal is especially galling, since PBS never felt the Lewinsky scandal was about character! Within days, the PBS NewsHour was rounding up media experts to lament a "rush to judgment."

Mark Shields also asked this about Trump: “The fact he's invited transgender Kaitlyn Jenner as his guest to the convention, is that reassuring to social conservatives?” Perkins didn’t satisfy him with a No.

Before Brooks attacked Perkins, PBS anchor Judy Woodruff stressed her obsession of the week, that the Republicans are being too mean to Hillary Clinton: “Tony Perkins, why do you think there's been so much -- frankly it seems like anger and negativity coming from the floor of this convention? Sort of the repeated chants, "Lock her up" about Hillary Clinton. Do you feel good about that message being so far being the main message of this convention?”