PBS covered the Republican convention for three hours of prime time on Monday night, in association with its pubcasting buddies at NPR. But they were allergic to showing any Hillary-scandal films that were offered on the convention floor. As a mini-documentary ran about Benghazi, PBS anchors Gwen Ifill and Judy Woodruff clumsily talked over it, and NPR national political correspondent Mara Liasson had a wide-eyed freakout at what she claimed was a historically “intense animus” against an opposing candidate. [video below] 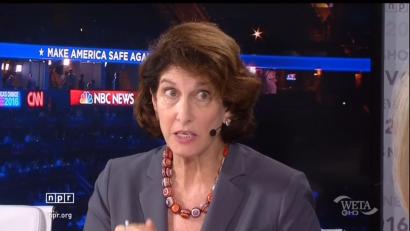 GWEN IFILL: Mara Liasson, why is it that this Benghazi episode gets so much attention? Why does it resonate, as it is tonight with the crowd?

MARA LIASSON: This is something that really for a lot of Republicans, and Hillary Clinton opponents, kind of  crystallizes the worst thing about her, that she caused the deaths of these, of these soldiers and other personnel. I don't know if Mark remembers a time when so much intense animus has been directed at the opposing candidate. This strikes me as being pretty intense.

MARK SHIELDS: No it is, I don’t know, going back. It’s a good question.

LIASSON: I mean, “Hillary Clinton should be in stripes. She deserves to be in prison.”

SHIELDS: No that, from the crowd, “criminal” –

LIASSON: From the crowd, and repeated by the speaker.

IFILL: She was off-script. This was not part of her speech...

SHIELDS: That was not an organized, disciplined activity on her part. It was spontaneous.

LIASSON: But this is an organized, disciplined message –

LIASSON: – That’s being repeated in a very disciplined way. Things are bad, we have no stability, Donald Trump can fix it, Hillary Clinton – uh, you know, has to be put in jail. This is a pretty – [pause] – disciplined message.

From the sound of this routine, no one on PBS knew what was coming up in a couple of hours on Charlie Rose -- Hillary Clinton announcing that Donald Trump was the most dangerous man ever to run for President of the United States. "Donald Trump being near the nuclear code would pose a danger to civilization....He has no self-discipline. No self-control. No sense of history. No understanding of the limits of the kind of power that any president should impose upon himself."

There was no warning of "intense animus" for that.

Then PBS anchor Judy Woodruff broke into provide the time-tested Democrat talking point that Hillary has been somehow found utterly blameless by every investigation into Benghazi over the last four years, and that Trey Gowdy’s probe went on for many months and many millions and didn’t put a finger on her:

JUDY WOODRUFF: But we should point out that there were how many congressional committees that investigated this, and several special investigations, six of them, and the last one, which went on for months and months, and they spent millions of dollars, essentially came out and said ‘mistakes were made by the administration in not providing the security that was required,’ but it did not point a finger at Hillary Clinton herself.

WOODRUFF: And this is from a Republican-led House committee.

The PBS anchor also displayed her distaste for harping on Democratic scandals by talking around the convention’s focus on the Obama fiasco known as Operation Fast and Furious. She blatantly announced they would not be discussing this distasteful story.

WOODRUFF: This is a video they’re showing. We’re going to be hearing  from a couple of speakers, two of whom are siblings, the sister and brother of a Border Patrol agent who died while patrolling the Mexican border. Terry, Brian Terry was killed by men using guns connected to Operation Fast and Furious, which we won’t get into, Gwen, but it’s something Republicans use to go after the administration.

PBS viewers did not really see that film or the Terry siblings on their taxpayer-subsidized airwaves.