Parker notes readers have sent her a 13-minute YouTube video titled "Hillary Clinton lying for 13 minutes." Let's hope they don't get put in handcuffs like the YouTube filmmaker blamed for the Benghazi terrorist attack. She tiptoes around the L-word: "Hillary Clinton’s vast résumé of, shall we say, inconsistencies, is the dog that caught the car and won’t let go."

There are some old favorites here, starting with the one issue that leftist NPR host Terry Gross hammered Hillary on in 2014 -- the gay agenda. Instead of her usual puff job, Gross asked "ten needling questions," causing Hillary to snap back. Parker focused her column on what our own Rich Noyes discovered in the MRC archive, the "Hillary under fire in Bosnia" myth [at 8:38]:

No news here, just a rehash of history. One Web author who posted the video — sent to me by several readers — insists that it would be impossible to vote for Clinton after viewing the 13-minute montage. This may or may not be true given the alternative, but a refreshed memory does invite fresh consideration of Clinton’s character....For whatever reason, she simply can’t seem to stick to the truth, which, at times, needs neither embellishment nor denial.

A review of her bizarre accounting of landing in Bosnia under sniper fire in 1996 is almost entertaining. Audacious, really. Rather than ducking and dodging across a tarmac where no welcoming committee was present, film footage reminds us that she and daughter Chelsea Clinton calmly walked from the plane, posed for photographs with students there to greet them, and shook hands with a little girl.

Parker actually condemns both candidates, although she grants Hillary points for intelligence, while Trump is cast as an “evil clown”: 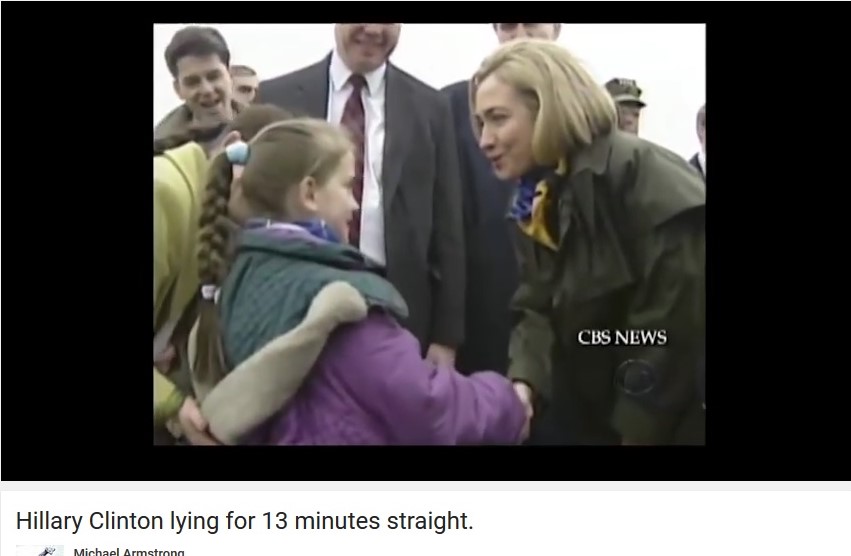 Presumptive nominees Clinton and Trump are equally egregious in their misstatements, if in substantively different ways. Clinton is measured, poised, concentrated and studied when she revises her personal history. Trump just says whatever tiny thought penetrates his prefrontal cortex, where inhibitory functioning is obviously kaput, blurting absurdities and bromides the way pirates toss plastic beads from papier-mâché ships at Mardi Gras.

Lacking a policy record to defend or reverse, Trump gets to gloat and sneer at his female foe. He did reverse himself on his irrelevant position regarding the Iraq War, but the number of real estate developers whose opinions factored into the nation’s military calculation in 2003 was exactly zero. Otherwise, his evil-clown act toward women, minorities, the disabled and others is apparently acceptable to the Republican Party.

Marcus began: "The past few weeks have offered Americans a chilling glimpse of three faces of Donald Trump: the stonewaller, the shape-shifter and the liar."

The shape-shifter part is indisputable: “Trump’s campaign is a vast policy desert, so declaring that the sparse fronds of detail are eminently negotiable erases any confidence that voters know what they are getting. Voting for Trump is like nailing Jell-O to your ballot.”

The stonewaller is a little funny, considering the opponents (and the incumbent). Marcus tiptoed around Obama with this: “Even more worrisome is what this high-handed approach augurs for a Trump presidency: to airily promise transparency while repeatedly failing to deliver. It is an iron law of politics that candidates do not magically become more forthcoming once in office.”

On the "liar" part, Marcus fixated on Trump fussing at reporters as he pretended to be a PR flunkie named "John Miller."

The popular understanding may be that all politicians lie, but there is a difference between the ordinarily distasteful political diet of spin, fudge, evasion and hyperbole and the Trumpian habit of unvarnished, unembarrassed falsehood.

“Who cares?” Trump would breezily assure the horrified Mar-a-Lago house historian after regaling guests with the untrue tale of how Walt Disney himself created the nursery rhyme-themed tiles in his daughter’s room.

Who cares, indeed — an important question for voters. Americans have elected presidents who subsequently lied to them (and, yes, that includes the husband of a current candidate). Knowingly electing one who lies while trying out for the job would be a tragic mistake.

Earth to Ruth: What about the other choice? Doesn't she have a record of "unvarnished, unembarrassed falsehood"? Starting with the Lewinsky affair "won't be proven true"?  Unlike Parker, Marcus never mentioned Hillary Clinton in her piece. Her archive page shows a lot of anti-Trump columns, but she hasn't focused on Hillary since a column in March.

In February, she did criticize both Trump and Clinton for a lack of transparency, making the same point (without mentioning Obama) as today: Candidates who resist transparency as contenders will only harden that behavior in office.