Following the lead of The New York Times, NPR on Saturday touted a new American trend – “climate change refugees,” people being subsidized by the federal government to move away from their lives on the coast.

NPR Weekend Edition anchor Scott Simon announced: “Members of a small Native American community in south Louisiana are becoming known as America's first climate change refugees. Their coastal home is disappearing and they've received a $48 million dollar grant to retreat inland. As Tegan Wendland of member station WWNO reports, they face the challenge of preserving their culture in the process.”

The experts predict the residents of Isle de Jean Charles need to move, even as some refuse. The payoff is big:

TEGAN WENDLAND: In coming years, the state predicts many more will need to leave their coastal homes or be flooded out because of sea level rise and continued erosion. Naquin says it's going to be hard just to get the 60 people on Isle de Jean Charles to move.

ALBERT NAQUIN, Biloxi-Chitimacha-Choctaw Chief: You know, we're spending a lot of money to leave people behind. So we need to get everybody off.

WENDLAND: It is a lot, more than $1 million per family, and they only have three years to spend it. Naquin hopes the appeal of the new land will entice them. It'll be modeled after their traditional bayou villages, but 30 miles inland. They're even bringing native plants. 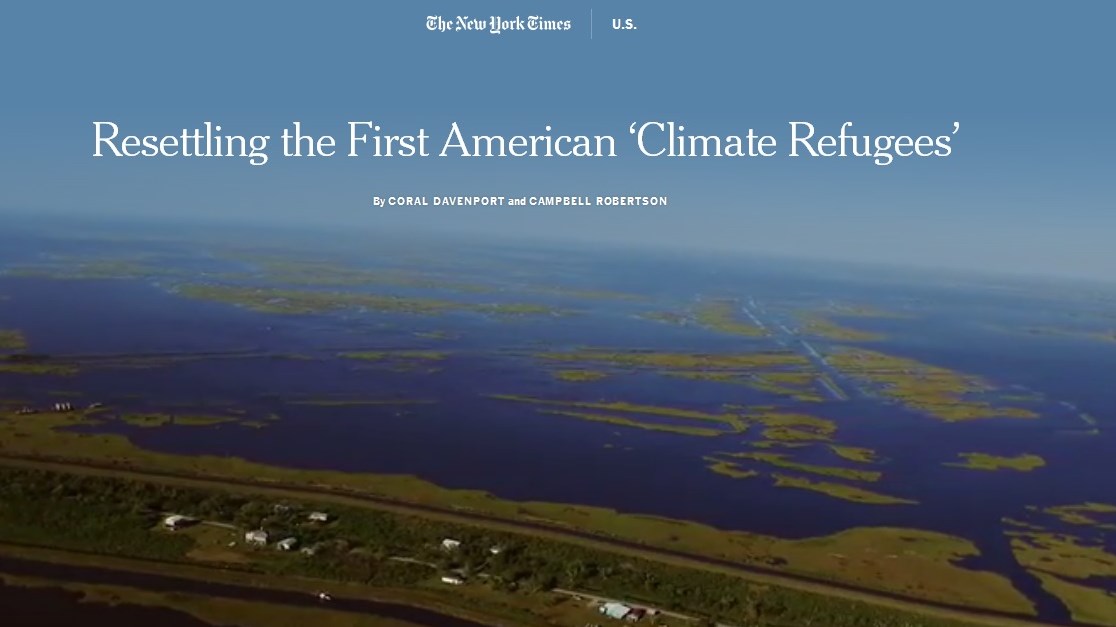 In The New York Times on May 3, reporters Coral Davenport and Campbell Robertson wrote an article headlined “Resettling the First American ‘Climate Refugees’”. They asserted these were the just the first of many, even as some resist the payoff:

In January, the Department of Housing and Urban Development announced grants totaling $1 billion in 13 states to help communities adapt to climate change, by building stronger levees, dams and drainage systems.

“We’re going to lose all our heritage, all our culture,” lamented Chief Albert Naquin of the Biloxi-Chitimacha-Choctaw, the tribe to which most Isle de Jean Charles residents belong. “It’s all going to be history.”

The Times story acknowledged despite the headline that local flooding has been exacerbated by man-made actions that aren't about the warming: "Channels cut by loggers and oil companies eroded much of the island, and decades of flood control efforts have kept once free-flowing rivers from replenishing the wetlands’ sediments."

But they quickly added "What little remains will eventually be inundated as burning fossil fuels melt polar ice sheets and drive up sea levels, projected the National Climate Assessment."

Davenport and Robertson pushed harder than NPR’s local stringer on the dire state of the planet, predicting "maybe even millions" will need to be resettled by the federal government:

Around the globe, governments are confronting the reality that as human-caused climate change warms the planet, rising sea levels, stronger storms, increased flooding, harsher droughts and dwindling freshwater supplies could drive the world’s most vulnerable people from their homes. Between 50 million and 200 million people — mainly subsistence farmers and fishermen — could be displaced by 2050 because of climate change, according to estimates by the United Nations University Institute for Environment and Human Security and the International Organization for Migration.

“The changes are underway and they are very rapid,” Interior Secretary Sally Jewell warned last week in Ottawa. “We will have climate refugees.”....

“This is not just a simple matter of writing a check and moving happily to a place where they are embraced by their new neighbors,” said Mark Davis, the director of the Tulane Institute on Water Resources Law and Policy.

“If you have a hard time moving dozens of people,” he continued, “it becomes impossible in any kind of organized or fair way to move thousands, or hundreds of thousands, or, if you look at the forecast for South Florida, maybe even millions.”