If someone can find a substantial difference between a Planned Parenthood fundraising appeal and a New York Times staff editorial, alert the media. On Monday, the Times published their own official invective against pro-lifers in an editorial titled “The State Assault on Women’s Health.” The online version was more specific: “The State Assault on Planned Parenthood.” 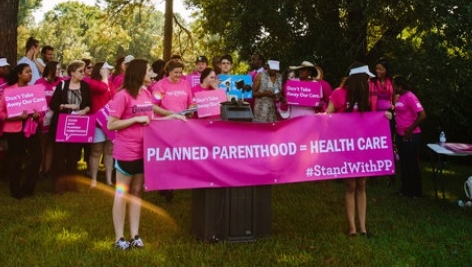 Republican efforts to cut Planned Parenthood funding were painted as efforts that led to health problems, like AIDS outbreaks: “Meanwhile, in Indiana, funding cuts forced the closing in 2013 of the Planned Parenthood clinic in Scott County, which was the area’s only H.I.V. testing center. An outbreak of H.I.V. quickly followed.”

And even the “health problem” of increased birth rates was ruining Texas: “And in Texas, which drastically cut funds to Planned Parenthood in 2011, birthrates among poor women jumped 27 percent in three years, according to a new study in the New England Journal of Medicine.”

But the beginning slams the Center for Medical Progress, who dared to expose Planned Parenthood as casually discussing the sale of body parts over salad and a glass of wine. Somehow, every word secretly taped is inadmissible in the court of public opinion:

Last summer, after deceptively edited videos were used to accuse Planned Parenthood of selling fetal tissue, congressional Republicans voted to block all federal financing for the organization, and threatened to shut down the entire federal government if they didn’t get their way.

The charges against Planned Parenthood were completely bogus — investigations in 12 states found no wrongdoing, and one, in Texas, resulted in the indictment in January of the video makers.

As usual, the Times displayed no self-awareness in decrying “deceptively edited” tapes by the CMP, which knowing our abortion-loving media, went the extra mile and posted the full video and transcript on their website, a much higher standard than liberal media outlets. Anyone interviewed by the Times and the TV networks will find themselves “edited” – in a much briefer fashion than the CMP tapes. The Times never located outrage at deceptively edited interviews on The Daily Show in Jon Stewart's day. But he's a liberal hero, and he's not opposing abortions.

Speaking of the reliability of journalism, a previous Planned Parenthood-pandering staff editorial by the Times last summer required a correction on CMP’s transparency:

An earlier version of this editorial incorrectly stated that the full video was released by Center for Medical Progress after complaints by Planned Parenthood. It was posted at the same time as the edited version.