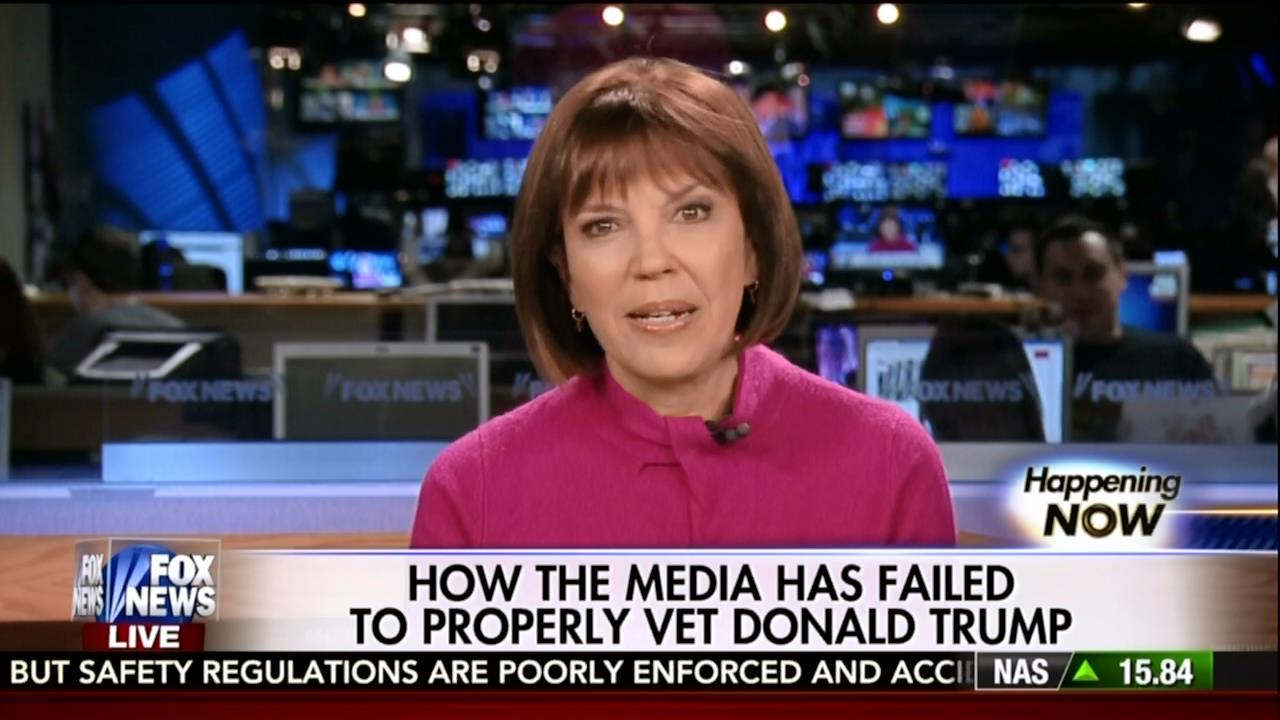 Miller – best known for going to jail during the Iraq war to protect her anonymous sources –  also chided her former colleagues at The New York Times to reveal the off-the-record conversations the Times editorial board had with Trump which may suggest a great flexibility in negotiating an anti-immigration policy.

Fox News anchor Jon Scott interviewed both Miller and liberal talk-radio host Ellen Ratner, who agreed Trump was under-investigated. Miller said her own family’s history in the hotel business leads to the mob connections you make in Las Vegas:

MILLER:  I think in the beginning as Mitt Romney said, he didn't take Donald Trump seriously as a potential candidate. Certainly not as a front-runner, but once it became clear that Trump was gathering steam, you needed to go look at the assertions that he had made about his own business career. My family is in the hotel business, and was in the hotel business in Las Vegas, and I can tell you you cannot do business in Las Vegas in those days when he's been doing this business without dealing with some mob-related companies and many, many reporters have delved into this and found that to be true. We had a book by Wayne Barrett in 1992 which made that claim. We had Tim O'Brien in 2005 in another book saying that Donald Trump isn't even worth billions, he's worth between 150 and 250 million. How is it possible this man may get the Republican nomination? We don't know how much he's worth. The media has failed to investigate him, absolutely right.

Scott later turned to the quibbles over the Times editorial-board interview with Trump:

SCOTT: There are also questions about The New York Times and the editorial board. This interview that supposedly Donald Trump gave them off the record. That was a big topic of discussion last night Judy. What you say your former employer about whether or not that information, that tape should be released.

MILLER: As you know, John, I'm a strong believer in protecting sources and newspapers and newspaper reporters have to have off the record conversations with candidates and with policymakers in order to get at the truth. However, when the issue of his flip-flopping of saying one thing to an audience and the the opposite to another becomes a campaign issue, at that point Donald Trump has to ask The New York Times to take those conversations off the record and the Times should at this point, at some point reveal what it was that Donald Trump says. This has gone beyond, once this conversation becomes a news item in and of itself, the Times has to own up to its own role in this.

Miller’s critics on the Left will surely insist that Miller didn’t want the Times to reveal her sources after her controversy and imprisonment made it a news item by itself. Few remember the irony of the Times demanding from Team Bush the special counsel in the Valerie Plame imbroglio that eventually put Miller in jail.

Miller concluded both Trump and Hillary Clinton are in need of more scrutiny: “The time has come to do some investigative hard-nosed reporting on both candidates, both frontrunners.”