You Go, Girls! People Magazine Gushes Over Hillary, Chelsea, and Charlotte On the Trail 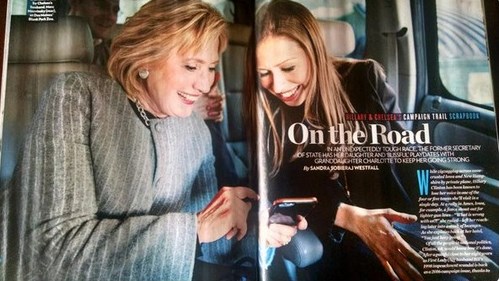 People magazine interviewed Hillary Clinton and Chelsea Clinton in the latest issue (February 15) for a "Campaign Trail Scrapbook" and reporter Sandra Sobieraj Westfall brought the usual syrup. On the table of contents, over a picture of Chelsea resting her head on Hillary's shoulder, they aid "As voting begins, Hillary and Chelsea Clinton reveal the personal side to this year's raucous race to the White House."

Over a two-page photo of the two women, People's headline for the story was "On The Road: In an unexpectedly tough race, the former Secretary of State has her daughter and "blissful" playdates with granddaughter Charlotte to keep her going strong."

“How sick of selfies are you?”

“What memories have come back of being here in ‘08 with Mrs. Rodham? [Her late mother.]”

“We’re hearing less sexist talk about your looks. Have we evolved or are Trump’s hair and Marco Rubio’s boots taking the heat off this time?”

“What would Chelsea do in your White House?”

“Will anyone named Clinton be picking out linens for state dinners?”

“Charlotte’s on her first campaign trip?”

“You raised an only child. What does it ment to you that Charlotte will have a sibling?”

“Are you going to be a pushover grandma or discipline Charlotte the way you did Chelsea?”

“Do you carry lucky charms?”

This was the one news-related question:

“You have had friendly relationships with Mr. Trump and his family. Now that he’s dragged up the past, could you ever be friendly again?”

Hillary drew headlines for  saying "We were not friends. We knew each other, obviously, in New York." In other words, "I went to his wedding to lend my lustre to a donor, but not as a friend."

A few noticed how she answered the "less sexist talk about your looks" question. "The Internet has become a refuge for vile comments about anybody who dares to put him- or herself into the political arena. There seems to be  a special amount of venomous commentary about women. Some women reporters find themselves, like Megyn Kelly has, drawn into the political arena for their professional behavior -- and that's fair game --- but for their appearance. So it's maybe one step forward but not two."