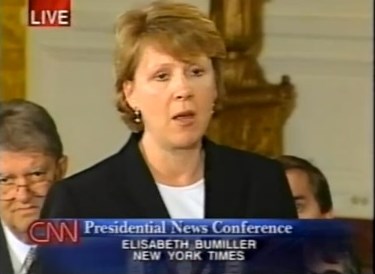 In April of 2004, New York Times reporter Elisabeth Bumiller stood up at a press conference with President Bush and uncorked this question: “Two and a half years later, do you feel any sense of personal responsibility for September 11th?”

Oh, the irony: Now that Bumiller is running the Washington bureau of the Times, she won't take any responsibility for the paper shamelessly low-balling this year's March for Life into the "hundreds" when other newspapers at least said "thousands." They also said it "appeared to be more than a thousand." It was only mentioned in passing deep in two weekend stories on the East Coast blizzard.

Washington bureau chief Elisabeth Bumiller and other editors at the paper, which promised more public accountability after the disaster that affirmative action hire Jayson Blair wrought, ignored repeated emails since the story was published January 22.

But reached on the phone late this afternoon, Bumiller said, "We've been through this" and demanded to know why she was being asked about it anyway.

Uh, maybe, because she is the paper's DC head?

Bumiller replied that, "We decided it did not merit a correction."

"Because the information was correct."

Isn't that convenient? Well, it's correct that "hundreds" were there, even if there were 10,000, right? Bumiller should take a look at video that shows this crowd wasn't tiny:

Or check out the video our Katie Yoder made on the scene:

Gahr went down an authority level and found more avoidance:

Nicholas Fandos, who penned the story and is apparently a news clerk because he answered the main DC bureau number Thursday night stonewalled when asked if he was at the rally and how he knew hundreds attended.

You need to help yourself, man. How can anybody trust anything you write about anything now?

Our Clay Waters reported this is an ongoing pattern of hostility and avoidance:

The paper’s Public Editor Margaret Sullivan chided the Times in 2014 for its sparse coverage of the annual March for Life, and recommended covering the “gathering with a staff reporter in Washington...The lack of staff coverage unfortunately gives fuel to those who accuse The Times of being anti-Catholic, and to those who charge that the paper’s news coverage continually reflects a liberal bias...”

But the Times failed to take Sullivan’s advice. 2015 march coverage amounted to a half-sentence in a hostile story, and in 2016 the paper also failed to devote a full story to the March for Life.

PS: On the abortion beat, Gahr also recently noted that most of the press ignored an angle explaining the mysterious Houston turnabout of a Planned Parenthood probe. The D.A. indicted pro-life activists instead:

The Houston prosecutor whose grand jury indicted two pro-life activists behind the Planned Parenthood sting but cleared the group of wrongdoing is closely connected to the lawyer for a late-term abortionist she failed to prosecute.

Chip Lewis, the attorney for Douglas Karpen, did spin control for Harris County District Attorney Devon Anderson after she came under fire for letting his doctor client off the hook. He also contributed $25,000 to her election campaign the following year.

Lewis has even suggested that the outcome for his client could explain why the grand jury indicted Center for Medical Progress founder David Daleiden, who made the videos, and not Planned Parenthood.