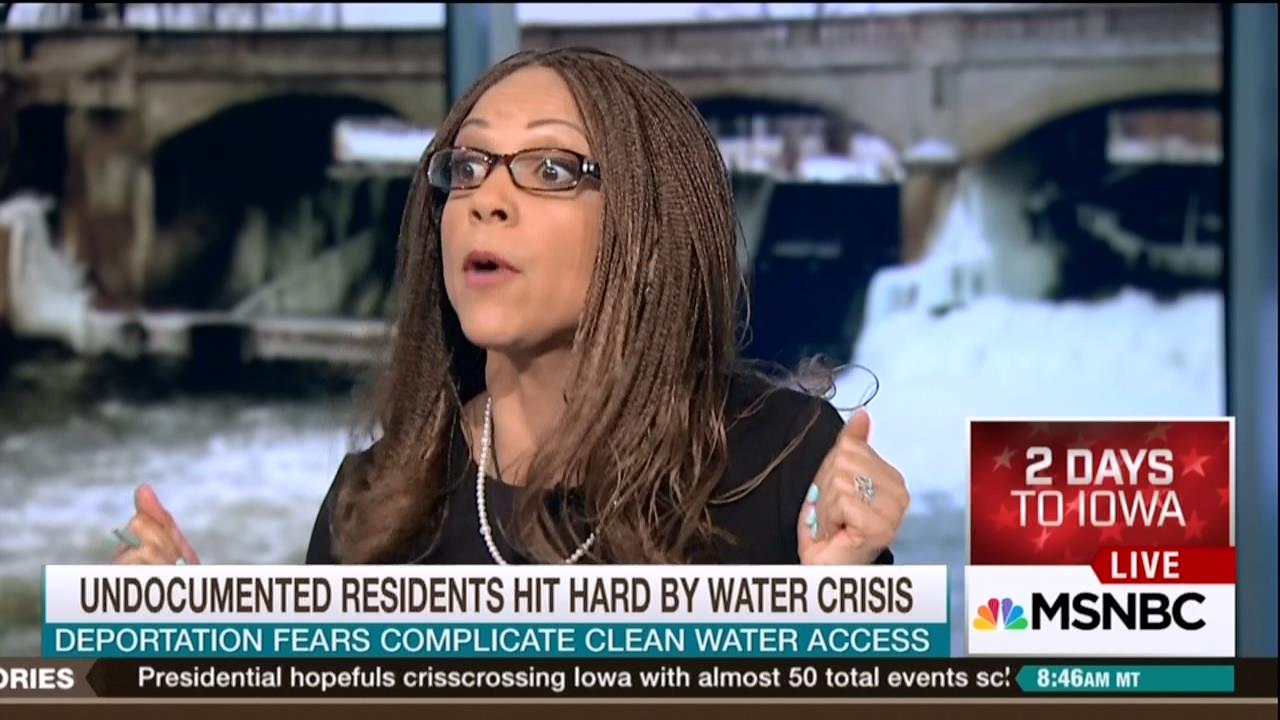 The left-wing hootenanny that is the Melissa Harris-Perry show went off the rails again on Saturday morning, with the host and her National Public Radio guest somehow comparing illegal aliens in Flint, Michigan to the Underground Railroad and the Fugitive Slave Act. As if someone in America was enslaving the illegal immigrants?

The topic was the Flint water scandal, a favorite MSNBC obsession. But Harris-Perry and longtime NPR Latino USA host (and radical activist) Maria Hinojosa were freaking out about how illegal aliens don’t want to accept clean water because it might subject them to deportation. They’re leftist enough to blame Team Obama for letting the children of illegal aliens be poisoned.

Harris-Perry complained “I don’t want to let Secretary -- Homeland Security Secretary Jeh Johnson, and his deportation sweeps at the behest of the Obama administration that have struck fear in so many communities, off the hook here because it is part of my understanding about why at least some groups of children are continuing to be poisoned in that community. because they are too afraid to in fact accept the help!”

The nutty professor explained "I don't want the Obama administration’s final year to be marred by a fugitive slave law around the question of this deportation that leads in the context of Flint to actual children being actually poisoned by lead because their parents are too afraid to open the door for clean water."

This is how it turned rhetorically to the crazy part about fugitive slaves:

MARIA HINOJOSA, NPR: So when we think about living in the United States of America with this kind of fear, we’re talking about an underground community. And I was thinking about my notes and I was writing, you know, underground. This is what an underground community. And I was like underground railroad, underground. We have to understand that there is an underground now in this moment in history that is before our eyes. And actually I think that if, if the good people of Flint knew where their neighbors were who are undocumented, I believe that they would actually go and help them. But these are communities of undocumented immigrants in a community like Flint that are so underground they may not even know where they are, right? So that’s how deep we're talking about. And the notion that you`re afraid to come out of your home? Again, Melissa, I find it interesting that you said Jeh Johnson. I’m saying Barack Obama.

HINOJOSA: I'm saying Barack Obama, and you know what the simplest thing to do? Send Michelle Obama to go meet with these families. Something.

HARRIS-PERRY: Well, I mean, I mean, maybe -- but, look, for me it’s not a First Lady moment. It, it, it is the Department of Homeland Security making a decision and I presume that it`s a decision that is coming from the administration, but I don't really know. ‘Cause I have asked Mr. Johnson repeatedly to be on my TV show, and he will not. So that is why I keep calling on Mr. Johnson. Any time he would like to sit down with me, he can. I mean, my, maybe I’m all wrong.

But, but I will say, Jamilah, I want to come back to Maria's point here that, that this does feel like potentially a black-brown coalition moment. Because, because I don't want the Obama administration’s final year to be marred by a fugitive slave law around the question of this deportation that leads in the context of Flint to actual children being actually poisoned by lead because their parents are too afraid to open the door for clean water.

Jamiliah Lemieux, a senior editor at Ebony magazine, is not the person you call on so that it gets more reasonable in the studio. She added that for Obama to set this deportation precedent is "terrifying," since the Republicans have no problem with throwing all the "brown people" out of America:

JAMILAH LEMIEUX: You know what is one of the most terrifying things about this moment for me is the possibility that a Republican could become the next President, and that this precedent has been set by a Democrat.

LEMIEUX: .that we can come into your house at four or five o`clock in the morning, while you`re asleep, taking you and your family away. So if a Democrat is doing that, what happens next when we have candidates that have said I`m not letting Muslims in.

LEMIEUX: And I have no problem putting all of you brown people out. That's terrifying.