Chuck Todd's Softball to Hillary on E-Mails: 'Are You Concerned?'

NBC Meet the Press host Chuck Todd conducted a pretty soft interview with Hillary Clinton on Sunday, especially the way he let Mrs. Clinton get away with suggesting there is no e-mail scandal and “I cannot control what the Republicans leak,” as if the Inspector General of the intelligence community is some kind of Republican plant.

Todd left it for the end of the interview, and only asked her if she was “concerned” – the softest possible way of putting it, not the Tim Russert way. 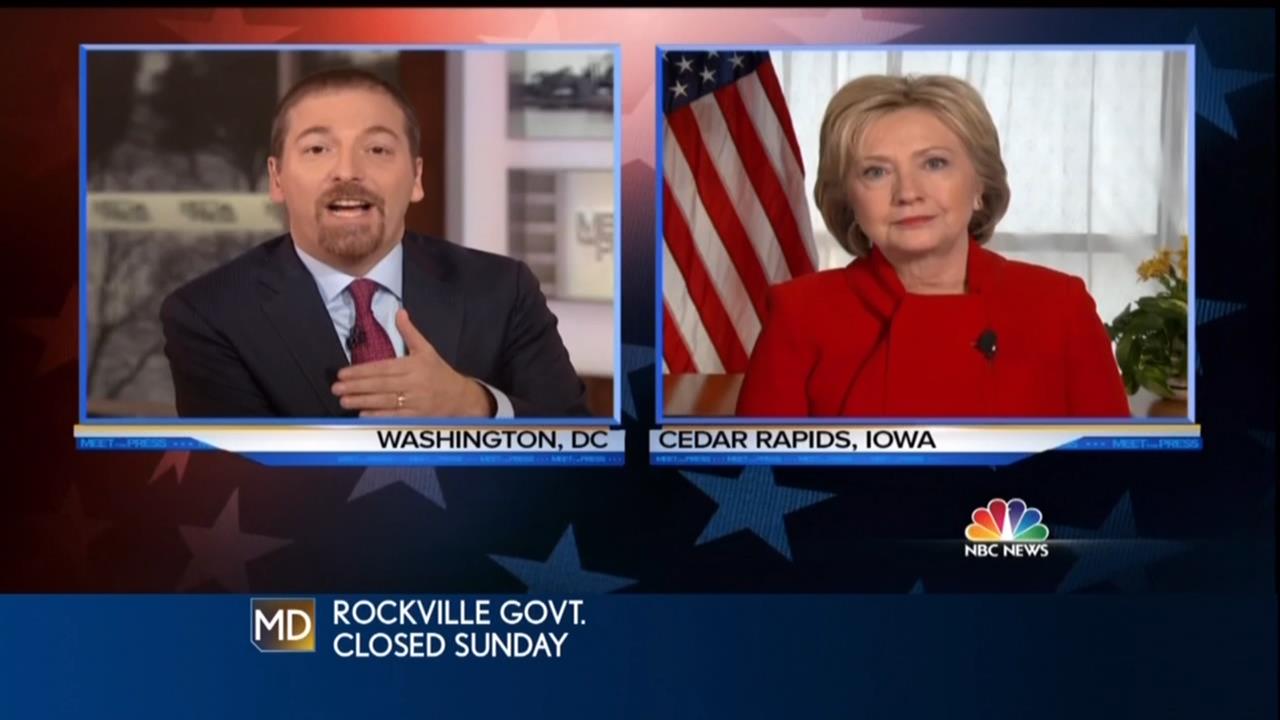 TODD: Two more quick questions. The Des Moines Register editorial, in praising you and your experience, did bring up the e-mail issue as one of those things that they're frustrated with how you responded to it. Let me just ask you this question.

Last week you were asked about the FBI investigation. Are you concerned? You said you haven't been contacted by them. Are you concerned this investigation is taking too long? That it's putting an extra cloud over your candidacy and until it gets behind you, you're going to have these issues and Michael Bloomberg even cited it as a reason why he's thinking about running.

CLINTON: No, I'm not concerned because I know what the facts are. I never sent or received any material marked "Classified." I cannot control what the Republicans leak and what they are contending. And I thought it was interesting, Chuck, you’ll as a political observer understand why, back a couple months ago Kevin McCarthy spilled the beans that the Benghazi investigation was all about bringing me down, something that I suspected but I went ahead, testified for 11 hours, answered all their questions and even they admitted there was nothing new.

Now, Senator Grassley shows up at a Trump rally yesterday in Iowa. He’s the chairman of the Judiciary Committee who has — and his staff have been behind and pushing a lot of these stories, and announces he’s there for the simple reason, to defeat me. I can’t control what the Republicans are doing. But I know what the facts are and I will just keep putting them out there.

Hillary never lies or spins, she only puts out the "facts." Todd only followed up with another softball: “And Michael Bloomberg, your reaction to his potential candidacy.”

The Register editorial wasn’t much tougher than Todd, as they touted her experience as a big plus:

She is not a perfect candidate, as evidenced the way she has handled the furor over her private email server. In our endorsement of her 2008 campaign for president, we wrote that “when she makes a mistake, she should just say so.” That appears to be a lesson she has yet to fully embrace.

STEVE HAYES: The inspector general for the intelligence community, according to NBC News, had to be read in to this new program. (LAUGHTER)

According to NBC News, the inspector general had to be read into this program because it was so highly classified. He had to have his classification levels upgraded, in effect, in order even to evaluate this program that was discussed on Hillary Clinton's server. I talked to three national security lawyers who deal with this for a living, and this is all they do today. And they all said without exception there is no question this person would have lost her clearances if this were a senior GS-14 or 15 employee, probably would have lost his or her job and possibly would have already been indicted.

BAIER: Not only that, but the emails then go to Hillary Clinton's lawyer who doesn't have the classification or the access either.

Get that? NBC News reported information on this story. Does Chuck Todd not read NBC News on the Clinton scandals? Because his questioning never included a hint of it. (NBC News followed up the next day by passing along top officials spinning that Hillary's top-secret emails were "innocuous.")

Then Charles Krauthammer dropped the hammer on Hillary's denials in an NPR interview:

KRAUTHAMMER: I'm just shocked by the brazenness of her denial. For her to say today I never sent or received, because, remember, earlier she said I never sent, which allowed you to do a Clintonian what is is and said I wasn't talking about receiving. The I.G. had reported this is several, many of the absolutely highest top secret.

And it's reminiscent of her reaction with the beginning of the Lewinsky scandal when they denied the truth and she said this is the vast right wing conspiracy. The go to initial answer always is to brazenly say a lie, there was no relationship, and then for her to come in and to say you this is just imagination or cunning on the other part, or a malevolent conspiracy. She does it again in the face of an I.G. who clearly is not an agent of the Republicans. But I don't think it hurts her among Democrats. I think it hurts her among the general population, the general election.

It also doesn't hurt her among NBC News politicos, who can't seem to ask follow-ups of the Democratic front-runner (at least for now).