USA Today released a poll on Monday that repeated a poll from just two months ago to underscore a majority oppose defunding of Planned Parenthood. But to update it, the newspaper decided to ask if “Heated political rhetoric about Planned Parenthood and abortion bear some of the responsibility for what happened" in the Colorado Springs shooting. They found 46 percent agreed to blame pro-lifers, and 36 percent disagreed.

Susan Page explained how they built on accused shooter Robert Lewis Dear’s alleged words about “baby parts” to blame rhetoric for the violence:

Law enforcement sources have said he said "no more baby parts" in comments to officials after the shooting. 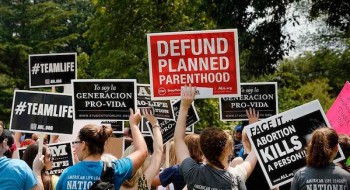 In the poll, 46% agreed with the statement: "Heated political rhetoric about Planned Parenthood and abortion bear some of the responsibility for what happened" in the shooting.

In contrast, 36% agreed with the statement:  "The event was a random act of violence and not connected to politics."

USA Today and their college partners are testing the effectiveness of a liberal talking point: that a shooting can somehow be traced to “heated rhetoric” of what happens in an abortion – a baby is destroyed – or heated reactions to Planned Parenthood officials casually talking about crushing baby heads while they munch on salad.

So instead of Planned Parenthood being the subject of controversy for its callous discussions of creating a market in baby parts, they can deflect all scandal on to the “anti-abortion” movement.

In September, USA Today touted a 65-to-29 percent margin against defunding Planned Parenthood. In the new poll, the number slipped to 58-33, but Page didn't refer back to the previous poll. The September question was very plain: "Do you think all federal funding for Planned Parenthood should be cut off: yes or no?"

The pollster never mentioned the sting videos, just moving on to: "Should supporters of de-funding Planned Parenthood be willing to force a government shutdown over the issue, if it comes to that?" and "If the government shuts down because of the funding dispute over Planned Parenthood, whom would you blame: President Obama, congressional Republicans, or congressional Democrats?"

By contrast, opponents of the heated anti-police rhetoric of “Black Lives Matter” activists hasn’t been the subject of a USA Today polling question. Is that heated rhetoric causing more violence against police? Or is it leading to a rise in crime because police officers are hesitant to take action in minority communities? The newspaper had no curiosity about the public mood.

In September, when the newspaper explored anti-police violence, the only poll they promoted was from a black advocacy group, headlined: “Poll: Blacks, whites agree police treat blacks differently.”