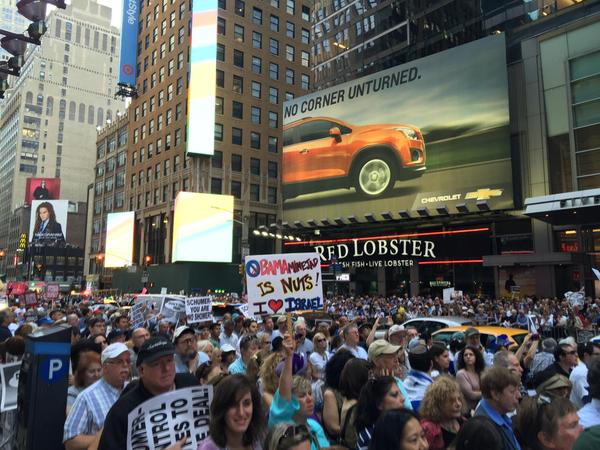 But on Wednesday, thousands (as many as 12,000) flooded Times Square -- the one named for the paper a few blocks north of the newspaper’s offices -- to protest President Obama’s nuclear deal with Iran, and the Times buried that in one paragraph -- paragraph 15 -- of a Thursday story headlined “Campaign for Congressional Backing of Iran Nuclear Deal Begins.”

Reporter Jonathan Weisman briefly brushed over it in a 27-word sentence: “In New York, opponents of the accord organized a large protest in Times Square on Wednesday evening, drawing thousands of people to demand that Congress reject it.”

The only photo in the story was Secretary of State John Kerry standing before a microphone.

Protest organizers warned: “Washington is prepared to give Iran virtually all that it needs to get to the bomb. To release $150 billion to Iran will result in the expansion of worldwide terror.”

Back in January, Times reporter Julia Preston managed to squeeze a 780-word story out of a teeny-tiny protest: A grand total of four students marching from Miami to Washington, D.C. in the name of amnesty for illegal immigrant students. By contrast, a massive anti-Obama rally that attracted over 100,000 people to the Capitol on September 12, 2009 resulted in virtually the same level of print coverage: A 932-word article.

On Tuesday, Preston struck again, finding a grand total of five immigrant students waging a sit-in at Sen. John McCain's office in Arizona worth a full story Tuesday: "Illegal Immigrant Students Protest at McCain Office." A medium-sized photo of the squatting students ran above the article about the "escalation of protest tactics" (from four to five protesters?)