WashPost Promises to Help Tear Down Former GOP Governor of Virginia: 'It's Going To Be Ugly'

The Washington Post has deeply and lovingly covered the corruption scandal around former Virginia Gov. Robert McDonnell, and couldn’t contain its excitement over the trial. In Sunday’s newspaper and in Tuesday’s Post Express tabloid, they highlighted this preview in headlines: “It’s Going To Be Ugly.” They couldn't wait for the ugliness.

What neither headline explained was that they were quoting former Democratic Gov. Doug Wilder, which only underlined what a Democratic rag they are. Meanwhile, current Gov. Terry McAuliffe’s corrupt little company GreenTech lost in a libel lawsuit last week against the conservative Franklin Center for its journalism. How did the Post treat that? 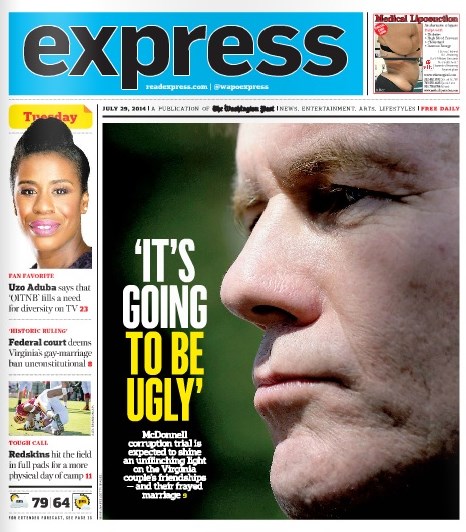 The Washington Examiner editorialized: "A federal judge in Mississippi last week threw out an $85 million defamation lawsuit brought by a politically connected corporation against a Virginia journalism non-profit. The procedural ruling drew little attention, and it could still be appealed. Even so, the dismissal represents a nice first-round victory for a news organization whose real crime was probably that it looked too closely at the business dealings of Virginia’s new Democratic Gov. Terry McAuliffe."

The Post reported when the suit against the Franklin Center was filed in April of 2013, but now Greentech is relegated to the category of “things only Republicans whine about.” It was recently mentioned at the tail end of a July 13 story by Post reporter Laura Vozzella which touted McAuliffe’s massive prowess at attracting economic development:

McAuliffe took office six months ago lacking any experience in state government but armed with an enormous network of contacts amassed over years as a political fundraiser, Democratic National Committee chairman, intimate friend of Bill and Hillary Clinton and international entrepreneur.

McAuliffe's promises to bring his Rolodex and deal-making charms to Richmond were ridiculed by Republican foes, and indeed, his energetic courtship of the GOP-dominated House got him nowhere this year on his top legislative priority: expanding Medicaid under the Affordable Care Act.

But McAuliffe's legendary power to strike a deal seems as potent as ever in the arena of economic development, where he has been tapping a vast collection of old friends and associates.

From Washington to Hollywood to Doha to Beijing, McAuliffe has someone on speed dial. His is an eclectic collection of names and numbers, spanning the government bigwigs who are celebrities only to wonky Washingtonians to the bona fide glitterati that swirl around two of his dearest friends, the Clintons.

McAuliffe has called on both White House counterterrorism guru Richard Clarke and "10" bombshell Bo Derek in his bid to bring jobs and investment to the commonwealth. His connections have helped draw Air China service to Dulles International Airport, land a movie directed by Meg Ryan, lure Carnival Cruise Lines back to Norfolk and ship $20 million a year in chicken and turkey to China.

"The man has a Rolodex on a global scale," said Todd Haymore, who as McAuliffe's secretary of agriculture and forestry worked with him to get China to lift its seven-year ban on Virginia poultry.