As the media boosted President Obama's meeting with Pope Francis on Thursday morning, none have noticed how the reportedly weekly-Mass-attending Vice President Joe Biden made remarks in Los Angeles at a "Human Rights Campaign" event last Saturday night. Biden expressed disbelief and outrage that anyone's still taking Catholic teaching on sexuality seriously in this modern age.

The gay newspaper The Washington Blade reported Biden used words like "close to barbaric" to describe the present system of religious liberty -- the notion that a religious employer doesn't have to hire (and can fire) gay activists. Biden even said "the world -- God willing -- is beginning to change." He then cited Pope Francis (out of context) saying "who are we to judge?" (video below) 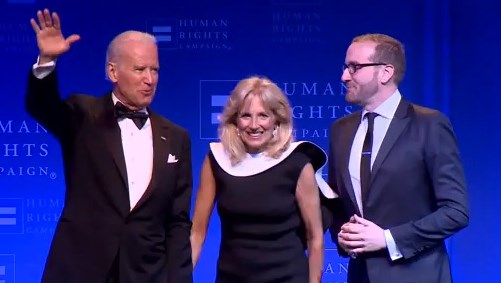 Biden called on Congress immediately to pass the Employment Non-Discrimination Act, saying the lack of prohibition on anti-LGBT workplace discrimination is “close to barbaric.”

“It’s outrageous we’re even debating this subject. I really mean it. I mean, it’s almost beyond belief that today, in 2014, I can say to you as your employee in so many states, ‘You’re fired because of who you love,’” Biden said. “Think about that. It is bizarre. No, no, no. It really is. I don’t think most Americans even know that employers can do that.”

Gay activists are upset that Team Obama hasn't just gone around Congress and issued an Executive Order instituting this "anti-discrimination" policy. Biden also said the orthodox Christian position on homosexuality is a "sick" cultural norm that has to go:

Biden paid tribute to the courage of gay activists: “All of you spoke up and stepped out and came forward, you came out and you marched, you demanded to be recognized, demanded your constitutional rights, demands a basic American dream. You demanded respect...your tenacity, your integrity, and yes, your physical courage, and your pride, bent the moral arch of this nation, and it’s finally moving in the right direction.”

Biden claimed they not only “liberated millions, millions in the LGBT community...you liberated tens of millions of straight guys and straight women,” who can now speak up for gay activism.

Biden's not only disagreeing with his own church's teaching. He's openly proclaiming it's "sick" and "close to barbaric."

Pope Francis could have also asked Obama how House Minority Leader Nancy Pelosi can be both Catholic and accept a "Margaret Sanger Award" from Planned Parenthood on the same day as this meeting. Penny Starr at CNS News reminds readers that Sanger wrote against “The Wickedness of Creating Large Families” and believed “The most merciful thing that the large family does to one of its infant members is to kill it.”