How deep in the tank for Obama is The Washington Post? On the front of Monday’s Style section was article headlined “The ring of truth: Aiming to inspire, Obama candidly share his story with at-risk young men from inner-city Chicago. Can he make a difference?”

Bizarrely, the Post put “The ring of truth” over an article where Obama relates to students by referring to his memoir “Dreams From My Father,” so much of which has a ring of falsehood. We know this directly from Washington Post assistant managing editor David Maraniss, whose historical research into Obama's life story informed his view that the memoir was “literature,” not history.

Inside the paper, the headline over the article was “Obama hopes his past can change the paths of these youths.”  Post reporter Zachary Goldfarb relayed that Obama made a “quiet visit a year ago" to a group called "Becoming a Man" at Hyde Park Academy High School in Chicago, and then he welcomed the group of kids later for a White House tour.

None of this was featured in the paper last year in real time. It seems it was delayed until Team Obama felt it was the perfect time for PR about the president’s concern for black youth.

On July 22, 2013, the Post blogged a bit on Obama’s visit last February “speaking to students at the Hyde Park Academy in Chicago,” but it sounded like a public event in that story, not a “quiet” off-the-record gathering. On Monday, Goldfarb laid it on thick about Obama’s speech. 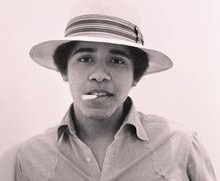 Then Obama was asked to tell his story: How did a black man become president? He talked about his anger as a young man growing up without a father in the picture. When he was a teen in high school, he partied too much, ignored school too much. He confided that he drank and smoked pot.

[Student Lazarus] Daniels struggled to grasp what the president was saying. That could not be the life of the man who became a president, Daniels thought. He half-raised his hand, and asked, “Are you talking about you?”

It wasn’t a question the president was expecting. “Yeah, I’m talking about me,” Obama said. “None of this is a secret. I wrote about all of this in my book.”

As we explained in our book “Collusion,” Maraniss never reported in the pages of the Post how he felt Obama’s memoirs were “literature,” not reliable fact. The only Post excerpt of Maraniss’s book was a 5,500-word chunk in the Sports section which carried the headline "President Obama's Love for Basketball Can be Traced Back to His High School Team." The story took up two whole pages inside that section.

There was a quick reference to Obama's “Choom Gang,” but Maraniss minimized the drug use in the excerpt:

The “choom” in “Choom Gang” was a verb meaning to smoke pot. Maraniss found Obama was an enthusiastic pot smoker, but it was mentioned in passing in the Post. This paragraph was lifted out of a chapter that began with Maraniss reporting the future president and his friends believed in “TA,” or “total absorption,” as in “[w]asting good bud smoke was not tolerated.” Barry championed “roof hits,” that when they were pot-smoking in the car, all the windows had to be rolled up, and when the pot was gone, they tilted their heads upward to suck in the last bit of smoke from the ceiling. Barry was also known for “intercepting” the rotating joint.

Goldfarb can plausibly be accused of misleading the reader into thinking Obama is “of Chicago,” meaning he grew up on the rough south side of Chicago, and not in Hawaii, where attended  a prestigious private academy in Honolulu:

The encounters last year showed the first African American president trying to improve the lives of young black men — a group he has sometimes been criticized for not focusing enough on. But it also revealed how the notion of a black man in the Oval Office, although a reality, remains a distant abstraction for those who might want to imagine following in his footsteps.

Longtime Obama aide Michael Strautmanis, who was in the classroom that day a year ago, said he was struck by how the moment was unusually personal yet also distant. “They all had that in common — race, gender, being of Chicago, being of the South Side of Chicago,” he said.

But, he added, “They saw him as apart and having had a separate experience from them. He couldn’t have had any trouble as a young person, because young people who get in trouble can’t become president.”

Notice how the Post is perfectly happy to let Obama wait four-plus years before making any real effort to "address race and the fortunes of urban youth" with no critics from the black community consulted. Instead, whenever Obama decides to shift his focus is exactly where the Post wants him to be. He is forever inspirational in whatever he takes up.

Goldfarb posted this gooey tweet about how this was his favorite story he's reported on Obama:

I’m about to post one of the more meaningful stories I’ve written on the White House beat, perhaps my favorite to report.

It is easy to root for the vulnerable black men of college age that are chronicled here, and to feel their pain over fatherlessness. But the Post is never going to wonder if the modern welfare state bears some responsibility for the state of black family breakdown. They're far too liberal to consider that possibility, and they don't seem to know anyone who would make that argument.