Alex Burns at Politico was handed the Kennedy Goo bucket for their latest feature, headlined "Ambassador Kennedy: A Star Is Born." The liberal media establishment are very eager to say Caroline Kennedy is packed with charm in her role in Japan as "political royalty," and if she was a terrible candidate to replace Hillary Clinton in the U.S. Senate, well, diplomacy is more her bag.

After about three weeks, this "iconic daughter of American political royalty" is already a "rock star" in diplomatic circles. In other words, she was born on third base and servile journalists insist she's hit a triple. Someone left the cap off the sugar dispenser: 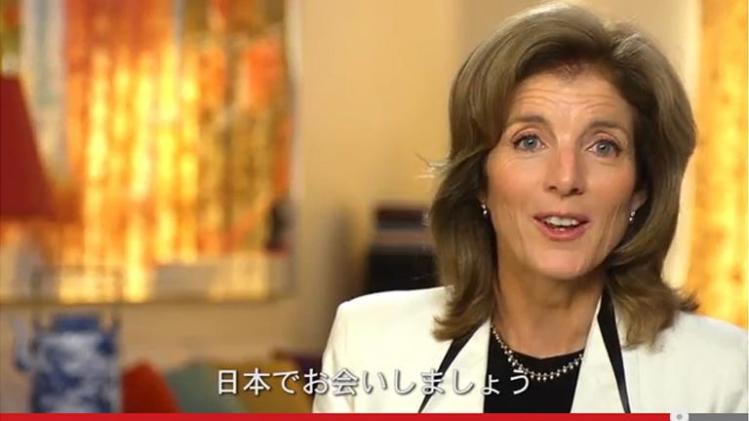 The soft-spoken presidential scion, who four years ago this month toured upstate New York in a short and ill-fated bid for the U.S. Senate, has swept with force into her newest public role as President Barack Obama’s ambassador in Japan. And if the iconic daughter of American political royalty showed herself to be deeply uncomfortable as a glad-handing pol, she’s on her way to becoming something of a rock star in the more dignified world of diplomacy.

She has been swarmed by well-wishers in her public appearances, including Japanese men and women who offered their sympathies during the November anniversary of President John F. Kennedy’s death. The Japanese TV network NHK delivered a live broadcast of her first appearance at Japan’s Imperial Palace, according to the AP, as throngs of onlookers crowded the streets. When Prime Minister Shinzo Abe appointed Japan’s first female prime ministerial aide, his office mentioned Kennedy’s role in Japan as an inspiration.

Burns then found "friends" and old Democrats to praise her for being well-received, a classic Kennedy-schmoozing ploy. Wow, there's former vice president and ambassador to Japan Walter Mondale, who is "struck" by the reception:

“She’s going to be enormously well received not only by the Japanese government, but by the Japanese people. She’s a serious person,” said Mondale, who was struck by the outpouring of public enthusiasm around Kennedy’s visit with the imperial family: “When she took her short buggy ride to meet the imperial family, there were thousands of people outside on the route cheering her on. Every new ambassador takes that route, but no one’s gotten the reception that she received.”

Save the Children vice president Mark Shriver, the former Maryland politician, said his cousin was “having a wonderful time” in Japan so far, and relishing the public diplomacy of the job. “She moves around, she goes out, she’s not a recluse,” Shriver said. “She’s fun.”

Just as with Barack Obama, the dramatic positive spin of media outlets is credited to her, not to supine journalists:

When she presented her credentials last month, Japanese and Chinese media quoted the prime minister’s spokesman declaring that there has “never been another U.S. ambassador welcomed with such high expectations.”

Kennedy, often described as a deeply private person, has embraced the very public aspects of the ambassador’s job. Unlike the Senate bid that plainly showed Kennedy to be ill at ease in the role of a retail candidate, observers say her public tasks in Japan – probably closer to the activities of a visiting head of state than to those of a political aspirant – have been exhilarating.

"Observers say" she's exhilarating. Once again, reporters use anonymous sources in a badly disguised attempt to cloak their own exhilaration -- or the editor's request for exhilaration.