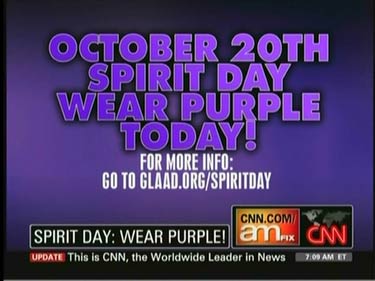 Despite CNN committing five segments to helping the Gay and Lesbian Alliance Against Defamation (GLAAD) celebrate the new "Spirit Day" against anti-gay bullying, GLAAD somehow left CNN out of their list of participating TV "news" outlets.

On her Facebook page, Canadian teen Brittany McMillan started the new day of obli-gay-tion, and wrote: "Many of [the teens] suffered from homophobic abuse in their schools or in their homes. We want to take a stand to say that we will not tolerate this. Purple represents Spirit on the LGBTQ flag and that's exactly what we'd like all of you to have with you: spirit." On the GLAAD Blog, intern Max Gouttebroze listed all the media activism for "tolerance" and against "homophobia."

To honor those teens who have lost their lives to anti-LGBT bullying, Secretary of State Hillary Clinton wore purple. Kathie Lee Gifford and Hoda Kotb wore purple during The Today Show, and the hosts from E!’s Chelsea, Lately, CNBC, ABC’s The View, NBC’s Nightly News with Brian Williams and World News with Diane Sawyer, CBS’ The Talk, HLN’s The Joy Behar Show and Issues with Jane Velez-Mitchell and MSNBC’s Keith Olbermann and Thomas Roberts also wore purple during yesterday’s programs. Ellen DeGeneres spoke about anti-gay bullying with Fort Worth, TX City Councilman Joel Burns and both sported the color in support of Spirit Day. Katie Couric will also be wearing a purple outfit and check out these screen shots of CNBC hosts.

MTV Networks (MTV, Nickelodeon, Vh1, Comedy Central, Spike, etc.) has distributed a memo to all employees with information about Spirit Day and will also be giving out thousands of purple ribbons to staff. LOGO will be running a purple ribbon on air all day and plans other activities.

Yesterday, GLAAD announced that E! Networks would be going purple across their platforms and E! News’ hosts Ryan Seacrest and Giuliana Rancic, as well as E! News Now hosts Amy Paffrath and Melana Scantlin, and E! columnist Marc Malkin would be wearing purple today in support of Spirit Day. E! Online even turned all their news headlines purple!